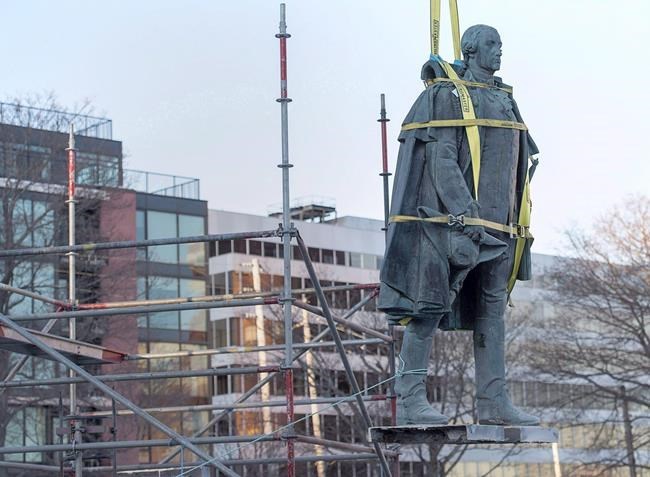 HALIFAX — The federal government is asking an Indigenous group to recommend a new name for a Canadian Coast Guard ship that pays tribute to a British military officer who offered a bounty for the scalps of Mi'kmaq people.

"This is an important step in reconciliation," Fisheries and Oceans Minister Bernadette Jordan said in an interview Tuesday, adding that Ottawa will be working with the Assembly of Nova Scotia Mi'kmaw Chiefs to come up with a new name.

"It's about righting an historic wrong."

The Halifax-based icebreaker known as Canadian Coast Guard Ship Edward Cornwallis is undergoing a refit in Nova Scotia and will be renamed later this year, before it leaves the Shelburne Shipyard, Jordan confirmed Tuesday.

Cornwallis is perhaps best known as the man who founded Halifax in 1749, but his mission to establish a garrison town included eliminating Indigenous resistance and, at one point, approving a scalping proclamation to "take or destroy the savages."

The federal government says the colonial governor tried to drive the Mi'kmaq from their lands through "barbaric measures."

Chief Terry Paul, co-chairman of the assembly, described Cornwallis as a monster.

"He was a murderer," Paul said in an interview. "Who in their right mind would want to commemorate a monster like that? That's what our feelings are in the raw. And this is why we are very grateful that the minister and the federal government has taken those steps to remove this name."

Paul said the government's decision to recognize the dark legacy of early settlers was an example of "reconciliation in action."

"By renaming the ship, we don't feel that this is erasing history," said Paul, who represents the Membertou First Nation in Cape Breton.

"In fact, it is acknowledging the horrific history of injustice and inequality that took place in our country's past — some of which still exists today .... Removing Cornwallis's name is a step towards healing for many of us."

In Nova Scotia, Cornwallis's name has already been removed from a street in Sydney and a church and a school in Halifax.

In January 2018, a large statue of the man was removed from a park in downtown Halifax. At the time, Mayor Mike Savage said the bronze figure was an impediment to forging respectful relationships with the Mi'kmaq.

Before it was pulled off its pedestal, the statue had become a flashpoint for protests. A municipal committee with Indigenous members is in the process of deciding what to do with the statue.

"Cornwallis's legacy does not reflect the values Canadians hold today, and his name is a painful reminder to many Indigenous peoples of the racism and inequality their ancestors endured and that many still face today," the Fisheries and Oceans Department said Tuesday in a statement.

The icebreaker CCGS Edward Cornwallis entered service in 1986 and its home port is the Canadian Coast Guard base in Dartmouth, on the east side of Halifax harbour.

Earlier this year, a $12.1-million contract was awarded to Shelburne Ship Repair to refit the vessel to extend its service. That work is expected to be completed early next year.

CFIA cancels imports of some puppies from Ukraine after dead dogs found on plane
Jul 7, 2020 6:11 PM

Photos surface of Andrew Scheer failing to wear mask while travelling
Jul 7, 2020 6:01 PM
Comments
We welcome your feedback and encourage you to share your thoughts. We ask that you be respectful of others and their points of view, refrain from personal attacks and stay on topic. To learn about our commenting policies and how we moderate, please read our Community Guidelines.