Disinfecting transit and Super Tuesday in the U.S.; In The News for March 3 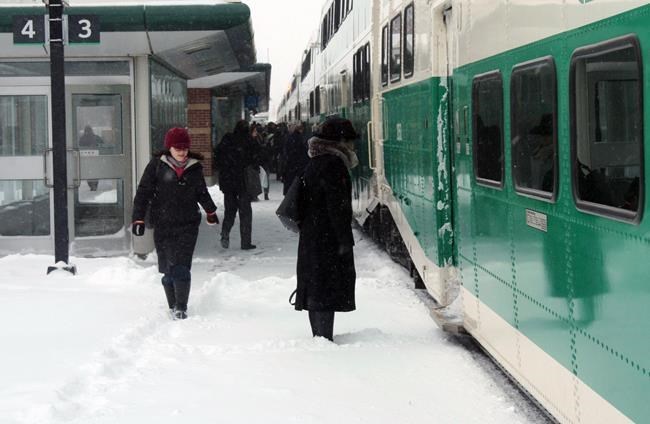 In The News is a roundup of stories from The Canadian Press designed to kickstart your day. Here is what's on the radar of our editors for the morning of March 3 ...

What we are watching in Canada ...

Some Canadian transit agencies are quietly taking steps to protect customers against the novel coronavirus that's been sounding alarm bells around the world.

Several say they have stepped up efforts to clean vehicles and stations, and switched to more aggressive anti-bacterial cleansers as a precaution.

Public transit services say there is still no need for concern even as the number of Canadians diagnosed with the virus known as COVID-19 continues to climb.

Health officials have recorded at least 27 cases in the country so far, with Ontario reporting the highest number at 18.

One regional transit provider operating a heavily travelled bus and rail network in southern Ontario says it has already documented one instance of an infected passenger travelling on one of its vehicles.

Metrolinx spokeswoman Anne Marie Aikins says long-lasting disinfectant spray was tested on one of its GO Transit trains recently, and is being rolled out to the entire network after a patient who tested positive for COVID-19 used one of its vehicles to travel home from the airport.

BURNS LAKE, B.C. — A Wet'suwet'en elected councillor says she has "high hopes" that internal conflict over governance issues and a pipeline can be resolved respectfully, but she is also concerned that not all members will have a chance to participate in the decision.

Karen Ogen-Toews of the Wet'suwet'en First Nation says elected councils have not always been invited to participate in clan meetings directly or in past discussions over land claims.

Crown-Indigenous Relations Minister Carolyn Bennett said it would be signed if the Wet'suwet'en Nation reaches a consensus on it.

But while Ogen-Toews says she has been hearing second-hand that clan meetings will take place this week and next, she says elected council members had not received direct invitations as of Monday afternoon.

Ogen-Toews represents one of five elected Wet'suwet'en councils that signed agreements in support of the project, while the hereditary chiefs say they never gave consent.

LOS ANGELES — The Democrats' moderate wing is scrambling to unite behind Joe Biden's presidential bid as voters across a series of Super Tuesday states prepare to render a verdict that could fundamentally re-shape the party's 2020 nomination fight.

The race was transformed in the 36 hours before polls opened as former rivals Amy Klobuchar and Pete Buttigieg abruptly suspended their campaigns and endorsed Biden.

The urgency of the moment reflected deep concerns from the Democratic establishment that Bernie Sanders, a polarizing progressive, was positioned to seize a significant delegate lead on Tuesday when 14 states and one U.S. territory vote.

What we are watching in the rest of the world ...

JERUSALEM — Prime Minister Benjamin Netanyahu's Likud Party has pulled ahead to a significant lead over its opponents in Israel's third election in under a year.

But his ultra-religious and nationalist alliance still appeared to fall short of the parliamentary majority required to form a government.

Exit polls on Israeli TV stations showed Likud and its partners capturing 59 seats out of the 120 in parliament.

Final results are expected to be announced later Tuesday and could swing Netanyahu over the top, weeks before he goes to trial to face corruption charges.

"This does not reflect the values of this company or our employees, and we deeply regret the pain we may have caused," X-Site Energy Services said in a statement on its website Monday.

The sticker had a black-and-white drawing of a female figure's bare back with hands pulling on her braided pigtails. The name "Greta" was written below. The company's logo was under the drawing.

The image unleashed a torrent of outrage after it began circulating online Wednesday. It prompted condemnations from Alberta Premier Jason Kenney, provincial cabinet ministers and members of the House of Commons.

"We are taking action to condemn this image and its publication and are committed to recovering and destroying the decals we distributed," X-Site's statement read.

"Management accepts full responsibility and, effective immediately, has made organizational changes to reflect this."

Wallenda will traverse the Masaya Volcano in Nicaragua on Wednesday in a stunt that he says will go on, no matter the conditions.

Wallenda says he's walking over an active volcano, facing every challenge that Mother Nature can throw at him from the high winds in the area to the heavy gases to, of course, the heat.

He says there's also the fact that it's the longest and the highest walk that he's ever attempted.

As you just read, Nik Wallenda plans to walk over a volcano this week. In 2012, what landmark did Wallenda wire walk across into Canada?

(Keep scrolling for the answer)

The inventor of the telephone, Alexander Graham Bell, was born in Edinburgh, Scotland. Bell left Scotland in 1870 and settled in Brantford, Ont., where he worked as a speech therapist for the deaf. He invented the telephone from 1874 to 1876.

Confused? Judy Sheindlin's announcement Monday that her popular syndicated courtroom show will end production in 2021 sets the stage for her return in a different format even as her old show may not really go anywhere.

The tough-talking former New York family court judge has ruled her television courtroom since 1996 and its popularity made her the highest-paid personality in TV. She announced on "Ellen" that next season will be her 25th and last making original episodes of “Judge Judy.”

After that, the 77-year-old mediator will be making a new show called "Judy Justice" that will debut in fall 2021.

"If you're not tired, you're not supposed to stop," Sheindlin told Ellen DeGeneres.

CBS, meanwhile, has made a two-year deal with stations that currently carry "Judge Judy" to air reruns of the program.

Niagara Falls. Wallenda started on the U.S. side and it took him about 25 minutes to walk into Canada across the falls. He was greated by border agents who inspected his passport.

Canadian geologist detained in Dubai for six years is back home after charges dropped
May 11, 2021 12:32 PM