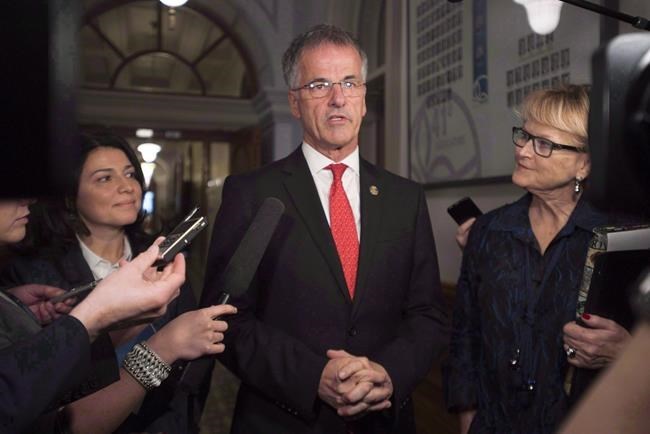 Quebec's anti-corruption unit has apologized to Guy Ouellette, an Independent member of the legislature, for arresting him in October 2017 for allegedly leaking sensitive documents about an investigation to the media.

The former Liberal member was never charged and the warrants used to search his home were struck down.

Frédérick Gaudreau, head of the anti-corruption police force known as UPAC, issued the apology to Ouellette on Thursday in person at a brief news conference. Neither men took questions from journalists.

Ouellette, a former police officer, was accused of leaking documents related to UPAC's probe of alleged illegal financing of the Quebec Liberal party under ex-premier Jean Charest, who has also filed legal action against the Quebec government over the case.

Gaudreau said Ouellette's arrest was unjustified and resulted from a "faulty" investigation. He apologized on behalf of UPAC for the "devastating consequences" the arrest and the investigation have had on the professional and personal life of the politician.

"We are conscious that the events violated the integrity of (Ouellette) and caused him irreparable harm and we sincerely apologize," Gaudreau said.

The apology is part of a confidential agreement that puts to an end a lawsuit launched by Ouellette, who had sued the Quebec government for $550,000 in 2018.

Ouellette, 69, was dumped from the Liberal caucus just days after the October 2018 provincial election.

He told reporters Thursday the apology is an important step but declined to comment further.

This report by The Canadian Press was first published June 10, 2021.