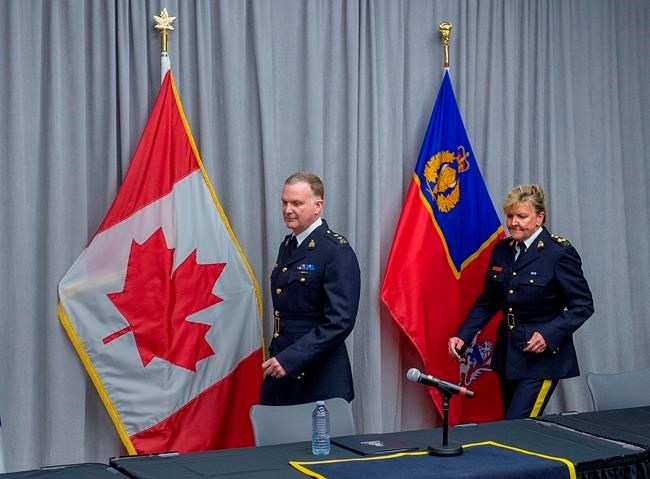 HALIFAX — The gunman who killed 22 people in Nova Scotia during a 13-hour rampage was described by police Thursday as an "injustice collector" whose grudges built up over time and eventually exploded in horrific violence.

RCMP Supt. Darren Campbell told a briefing that a behavioural analysis of the killer determined he targeted some victims for perceived slights, though many others were chosen at random.

Citing preliminary work from RCMP profilers and a forensic psychologist, Campbell described the shooter as "one who held onto conflict or differences with others, turning them inward until they boiled over in rage."

He said a so-called psychological autopsy, which is in the works, will help police better understand the contributing factors behind one of the worst mass killings in Canadian history.

Injustice collectors "are individuals who may have felt slighted or cheated or disrespected at any point in their lives ... (and) these injustices are held onto," said Campbell, the Nova Scotia RCMP's officer in charge of support services.

The senior Mountie's description of Gabriel Wortman's psychological profile was as close as police have come to describing a motive. And it falls in line with what some of his neighbours in Portapique, N.S., have said about the otherwise talkative and gregarious 51-year-old denturist.

One neighbour in particular, John Hudson, has said the man he knew for 18 years was sometimes obsessed with petty jealousies and grievances about the look of his neighbours' homes, past transgressions of relatives or the behaviour of his longtime common-law wife.

Thursday's RCMP briefing, the first about the case in more than a month, also disclosed a number of police findings that contradicted earlier versions of what happened on April 18-19.

After killing 13 people in Portapique, N.S., on the night of April 18, the killer — disguised as an RCMP officer — murdered another nine people in five communities the following day. One of his victims was RCMP Const. Heidi Stevenson, whose cruiser collided with Wortman's replica police car near Shubenacadie, N.S.

In late April, the union that represents RCMP officers said Stevenson had rammed her vehicle into the suspect's oncoming car, but Campbell said a reconstruction of the crash revealed that wasn't the case.

Campbell said the killer drove his vehicle the wrong way on a one-way street to purposely crash into Stevenson's marked car.

However, Campbell confirmed that Stevenson exchanged gunfire with the gunman before she was killed.

"She bravely engaged the gunman," he said, noting that Stevenson was wearing what he described as soft and hard body armour.

As well, Campbell said earlier witness reports suggesting the gunman used his fake police cruiser to pull over vehicles and kill the drivers were untrue.

Campbell also took exception to reports suggesting the RCMP failed to communicate or co-operate with other police forces when the killer was still at large.

"There is detailed information that refutes those claims," he said.  "I can confirm that the RCMP was in contact with other Nova Scotia police agencies several times throughout the incident and that information was communicated to all police agencies as it became known."

The RCMP has said it is contemplating a comprehensive internal review of the case.

Police are aware of where the illegal firearms came from, but Campbell did not release details.

A Mountie fatally shot the gunman at a gas station in Enfield, N.S., about 90 kilometres south of Portapique on the morning of April 19.

In addition to Stevenson, Wortman's victims included two nurses, two correctional officers, a family of three, a teacher and several of his neighbours in Portapique.

Campbell said even though the chief suspect in the case is dead, police would continue with their investigation as if they were pursuing a criminal case. Police have interviewed more than 600 witnesses in five provinces and the United States, he said.

Campbell was also asked about allegations made in 2013 by the gunman's Portapique neighbour Brenda Forbes, who told the Mounties about reports that Wortman had held down and beaten his common-law spouse behind one of the properties he owned.

The Mounties had said they were searching for records of that complaint. Campbell confirmed Thursday the RCMP had found two officers who had contact with Forbes in 2013, and they were reviewing their notes and files.

He did not provide further details, but made a point of noting that Forbes' account was secondhand.

The RCMP has faced intense criticism for failing to use a provincewide alert system to warn people that an active shooter was on the loose on April 19. Instead, the force issued a series of messages on Twitter.

The national Alert Ready system can be used to send alerts through television, radio and wireless devices, including cellphones.

Chief Supt. Chris Leather, the Nova Scotia RCMP's criminal operations officer, said the system had been used for the first time in the province only a few weeks earlier to provide information about the COVID-19 pandemic.

He said he was not aware that it has ever been used by police in Canada for an active shooter situation.

More importantly, he described the major problems that ensued when he ordered an alert on April 24 after police received word about shots being fired in a densely populated are of Halifax — a report that turned out to be false.

He said the province's 911 call centre was jammed with calls from people asking what they should do, where they should hide or if they should pick up their children.

"This had a negative impact on public safety," he said, adding that the RCMP is now working on a national Alert Ready policy.

The 90-minute news conference included other new information, including an admission that the Mounties thought at one point they had the gunman cornered at a residence in Glenholme, N.S., only to discover he had fled before police arrived.

"We actually missed the gunman by minutes," Campbell said, responding to a question about an internal email that suggested police were sure they were closing in on the suspect. "There were clear indications we had the gunman pinned down."

The senior Mounties made it clear they are still investigating whether anyone helped the killer or knew of his plans. They said they had contacted two of Wortman's relatives, both of whom have retired from the RCMP, and determined neither one had any role in the crimes.

This report by The Canadian Press was first published June 4, 2020.

The search continues and Ontario anticipates Stage 3; In The News for July 13
Jul 13, 2020 3:29 AM
Quebec police still looking for father, two days after missing girls found dead
Jul 13, 2020 3:13 AM
Ontario anticipates Stage 3 of its pandemic plan as concerns rise in Quebec
Jul 13, 2020 2:00 AM
Comments
We welcome your feedback and encourage you to share your thoughts. We ask that you be respectful of others and their points of view, refrain from personal attacks and stay on topic. To learn about our commenting policies and how we moderate, please read our Community Guidelines.