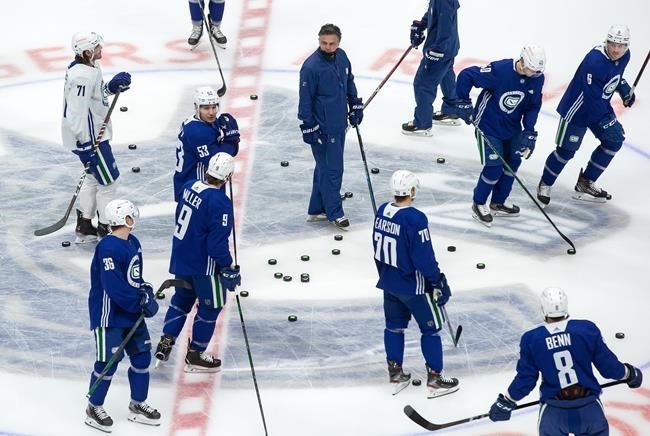 VANCOUVER — The Vancouver Canucks say 25 players and coaches have tested positive during a COVID-19 outbreak that involves a variant of the virus.

It is now the biggest reported outbreak in the NHL this season.

The team issued a statement Wednesday saying 21 players, including three from the taxi squad, and four members of the coaching staff have tested positive, and one other player is considered a close contact.

"This is a stark reminder of how quickly the virus can spread and its serious impact, even among healthy, young athletes," the statement said.

All players and staff are currently in quarantine, and 19 of the 22 players on Vancouver's active roster were listed on the NHL's COVID protocol list Wednesday.

The Canucks say the team has confirmed that a variant is involved in the outbreak, and full genome sequencing is being conducted by the B.C. Centre for Disease Control to determine which specific variant.

They say an ongoing investigation by Vancouver Coastal Health and contract tracing have found that the outbreak was sparked by a single unnamed individual picking up the infection in a "community setting, which has since been identified by public health as a public exposure location.

"Rapid spread of infection throughout the team indicates a link between contacts and the primary case," the statement said.

Asked whether the NHL is concerned that a player or staff member broke the league's protocol and sparked the outbreak, deputy commissioner Bill Daly declined to comment.

"We are aware of the facts and are comfortable that the situation was handled reasonably and responsibly," he said in an email.

"We’ve had clusters in many other work sites, even those work sites that have good COVID safety plans, there can be transmission of the virus between people," she said. "And this is exactly what’s happened with the Canucks.

"And I think it’s a reminder to young people across the province that you may not expect it, you may not know when it will happen. People may be in that asymptomatic period and infectious to others and the virus can be transmitted.”

Daly declined to say whether family members of players or staff had tested positive for COVID-19, but noted that the virus has been spreading premoninantly in household and social settings.

“In almost all of the clusters we see in workplace clusters, there may well be secondary contacts in households. And that’s because, of course, people are infectious before they even develop symptoms."

The Canucks said the health and safety of players, staff, families and the greater community "remains the utmost priority."

The Canucks' outbreak began on March 30 when forward Adam Gaudette was pulled off the ice midway through practice after his test result came back positive.

The NHL postponed Vancouver's game against the Calgary Flames the following evening when defenceman Travis Hamonic and a member of the coaching staff were added to the NHL's COVID protocol list. A total of six Canucks games have now been postponed.

Defenceman Nate Schmidt was added to the list on Wednesday.

A player on the COVID-19 protocol list has not necessarily tested positive. Players who are in self-isolation after travelling or who've been in close contact with someone who tested positive, for example, are also on the list.

The list does not include team staff or players not on the active roster, including those on the taxi squad.

The league's protocols require players and staff to be tested daily. Any time an individual's initial test comes back positive, the lab does a second test on the initial sample.

If the second test is negative, a second sample is collected. But if that sample returns a positive result, it's considered to be a "confirmed positive.''

The biggest previous COVID-19 outbreaks in the NHL were all in the U.S.

The Dallas Stars had their first four games postponed after 17 players tested positive, most of whom were asymptomatic.

— With files from Joshua Clipperton in Toronto

This report by The Canadian Press was first published April 7, 2021.