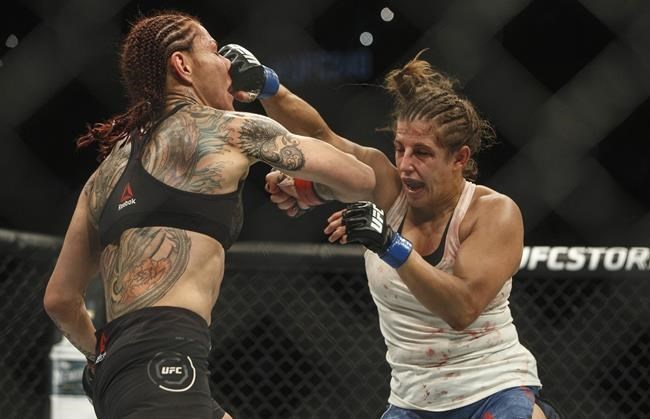 Spencer (8-1-0) is the first Canadian to challenge for a UFC title since former welterweight champion Georges St-Pierre, in his final outing, dethroned middleweight title-holder Michael Bisping in November 2017.

Nunes (19-4-0) also holds the bantamweight (135-pound) crown but is only putting her featherweight (145-pound) championship on the line on the pay-per-view card, which will take place without spectators at the UFC Apex — the MMA organization's in-house production facility.

The American-based Brazilian, who has won her last 10 fights, is one of only four UFC fighters to rule two weight classes at the same time (joining Daniel Cormier, Conor McGregor and Henry Cejudo).

Born in Montreal, Spencer moved to the U.S. with her family when she was four. While she maintains Canadian ties, she now calls Orlando home.

Oddsmakers favour Nunes at around plus-600 (as they did Cyborg against Spencer), meaning you have to bet $600 to make $100.

Despite those odds, UFC president Dana White said Nunes goes into the fight under weighty expectations.

"She's great but she is human," said White.

"And she's got two divisions, which is unbelievable," he added. "And literally everybody in those divisions are breaking down film on her and everybody's training on how to beat her. It's never harder than when you're on top."

Former bantamweight champion Cody (No Love) Garbrandt (11-3-0) faces Raphael Assuncao (27-7-0) in the co-main event. Assuncao is ranked fifth among 135-pound contenders while Garbrandt is No. 9.

This report by The Canadian Press was first published June 5, 2020.