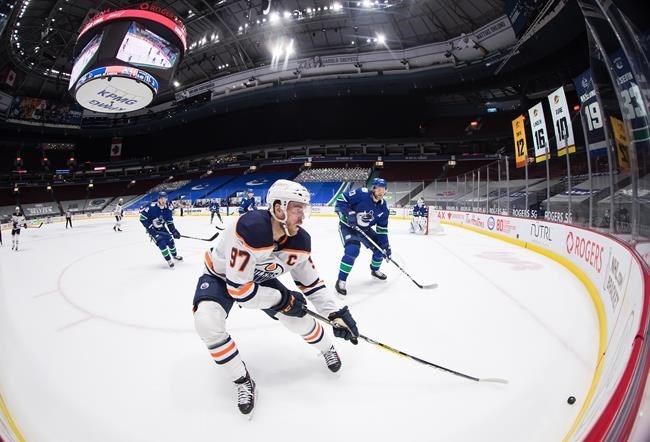 VANCOUVER — Connor McDavid and the Edmonton Oilers have accomplished their first goal of the season — making the playoffs.

A 5-3 win over the Vancouver Canucks on Monday cemented Edmonton's spot in the post-season but the Oilers captain said the hard work is far from over.

“Your first goal every season is to play in the playoffs. That’s step one and we’ve been able to do that," McDavid said. "Now we just need to continue working on our game and pay attention to details and get ready for the playoffs.”

Edmonton sits second in the North Division, eight points back of the Toronto Maple Leafs. Vancouver remains at the bottom of the all-Canadian group's standings with nine games to go.

Last year, the Chicago Blackhawks bounced the Oilers from the playoffs in a five-game play-in round series.

It's an experience that's motivated the squad this year, McDavid said.

“Everyone left the bubble in a bad mood. No one felt great about where we were at, how that series went," he said.

This season, everyone in the locker room has done a good job of buying in and believing, he added, and on the ice, they've found ways to keep pucks out of the net.

“And offensively, I’ve been pretty good," said McDavid, who leads the NHL in scoring with 91 points (31 goals, 60 assists).

"So I think that’s a recipe for a playoff team. And now it’s up to us to make sure we’re ready to go for Game One.”

Edmonton's star centre had two goals and two assists in Monday's victory, but said he isn't concerned about whether or not he'll hit the 100-point mark in the pandemic-condensed campaign.

“Obviously I’m trying to play the best that I can and make sure my game is where it needs to be heading into the playoffs," he said. "It’s a number. If I get there, great, if not, it’s not the end of the world either."

The rest of the Oilers locker room is going to do whatever they can to help McDavid, said defenceman Tyson Barrie.

"But he can get ‘er done on his own if he needs to," he said with a smile.

"He plays the right way every night and he hasn’t taken any nights off, which is pretty incredible. It’s been impressive to watch this year and fun to be a part of."

Jesse Puljujarvi had a goal and an assist on Monday, while Barrie and Dominik Kahun also scored for Edmonton (31-17-2), and Leon Draisaitl notched a pair of assists.

Nate Schmidt and J.T. Miller scored for the Canucks (19-24-3), who saw their losing skid stretch to five games.

Mikko Koskinen stopped 20-of-23 to collect his 12th win of the season. Canucks netminder Braden Holtby had 27 saves.

The Oilers held a 4-2 lead heading into the third Monday night and refused to relent. The Canucks had a single shot on goal through the first 15 minutes of the period.

Vancouver pulled Holtby with 3:29 left on the clock and the move immediately paid off with Boeser sent a bullet soaring past Koskinen off a face-off draw.

The right-winger leads the Canucks in scoring with 38 points (18 goals, 20 assists).

McDavid sealed the score at 5-3, burying an empty-net strike with 1:00 to go in the game.

Oilers coach Dave Tippett liked the way his group held on for the win.

"I thought we were pretty solid. We weren’t giving up a lot," he said. "We have to continue to improve in that area. It’s not just checking. It’s our play without the puck but also our play with the puck, the ability to make good plays, not turn the puck over at the wrong places on the ice and play in the offensive zone."

Kahun closed out the second period with a blast past Holtby, making it 4-2 for Edmonton with 44.1 seconds left on the clock.

Miller had briefly narrowed the Oilers lead to 3-2 with his 12th goal of the year.

Vancouver's second of the night came 17:16 into the second when Miller tucked a backhanded shot under Koskinen's outstretched glove from the top of the crease.

Just 41 seconds earlier, McDavid picked off a Canucks pass in the neutral zone, skated into Vancouver territory and blasted a shot at Holtby. The netminder initially seemed to make a glove save, but the puck trickled through and his attempt to dive backward and sweep it off the goal line was unsuccessful.

Holtby stopped a shot from Puljujarvi but couldn't corral the rebound. Barrie scooped up the puck at the top of the crease and quickly popped it in for his eighth goal of the season.

The Canucks tied the game at 1-1 before the end of the first, thanks to Schmidt's fifth goal of the season.

The defenceman took advantage of a net-front screen by rookie Nils Hoglander and rifled a shot from the top of the left face-off circle, beating Koskinen on his blocker side.

The Oilers got an early lead after McDavid sent a slick pass to Puljujarvi across the slot. The Finnish forward fired a one timer past Holtby from the right face-off circle to give Edmonton a 1-0 lead 3:45 into the game.

It was Puljujarvi's 13th goal of the year.

"Obviously their top line was a big factor in the game. We made a couple mistakes on a couple of their goals but you're gonna make mistakes and they made us pay," he said. "I thought we had one line that had a really strong game, a couple lines that worked extremely hard, and didn't get rewarded, and we tried to push at the end."

Monday's game kicked off four-straight matchups between the Oilers and Canucks. Round two will go in Vancouver on Tuesday.

The Oilers hold a 4-2 edge in the season series between the two sides with four games to go.

NOTES: Each side was 0 for 1 on the power play. … The Canucks recalled defenceman Jack Rathbone and centre Tyler Graovac from the taxi squad earlier on Monday, moves aimed at filling spots on a team that's been rocked by injuries. … Oilers defenceman Darnell Nurse played his 400th NHL game.

This report by The Canadian Press was first published May 3, 2021.