Stastny, Scheifele and Wheeler have three-point nights in 6-3 Jets win over Senators 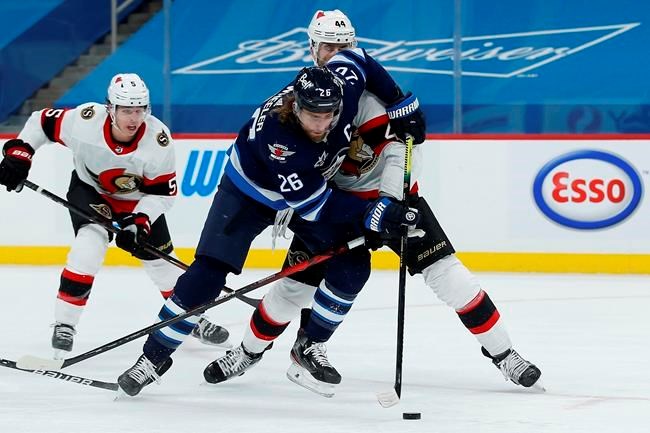 The Winnipeg Jets got the better of the Ottawa Senators for a third consecutive game, capping off an eventful day for the franchise.

Paul Stastny, Mark Scheifele and Blake Wheeler each had three-point nights in a 6-3 Winnipeg Jets win over the Ottawa Senators at Bell MTS Place in Winnipeg late Saturday night.

The victory came at the end of a long day for the Jets. Earlier in the day, the Jets traded winger Patrik Laine and centre Jack Roslovic for centre Pierre-Luc Dubois and a 2022 third-round draft pick.

"Clearly, we had an eventful morning here," Jets coach Paul Maurice said. "And then you've got a 9:00 (Central time) game that just starts a half an hour before my bedtime. I don't know how the players feel about that."

"We have a game to play," Wheeler said. "It's the most important thing. We're professionals. Unfortunately, it's part of this business. But at the end of the day, it's what we do for a living. This is bigger than anything else that happened today. I thought it was a good effort for our team and a big win."

Evgenii Dadonov, Brady Tkachuk and Nick Paul each scored a goal for Ottawa, but they ultimately couldn't keep up with the Jets once they scored three goals with less than five minutes to go in the game.

"They were coming out hard in the third period," Paul said. "I think we just got to keep making plays to break out and once we hit their blue line, get pucks deep."

Senators forward Derek Stepan hopes his teammates can learn from tonight's game, specifically that they can continue to press their opponent through a 60-minute effort and not just through two periods of play.

Senators goalie Marcus Hogberg made 32 saves in the loss, while Connor Hellebuyck made 18 saves for the Jets.

Ehlers opened the scoring with 5:57 left to play in the first period with a power play goal. Ehlers quickly fired a shot past Hogberg after receiving a pass from defenceman Neil Pionk. Adam Lowry also picked up an assist on the goal.

The Senators' offence woke up in the second period with three goals, beginning with Dadonov tying the game a little over four minutes in.

The forward drove to the net while trying to brush off a defenceman. While falling, Dadonov used his stick to push the puck through Connor Hellebuyck's pads. As the puck trickled into the net, Dadonov crashed into the boards. But, he soon raised himself up to celebrate with his teammates. It was the Russian's first as an Ottawa Senator.

Connor would later give the Jets the lead once more, scoring his fourth of the season to make it 2-1. Scheifele and Wheeler each picked up an assist on the goal.

Tkachuk then tied the game with 8:46 to go in the second. Tkachuk retrieved a backhand pass from Austin Watson with a Winnipeg Jet draped behind him. Tkachuk would then spin around and fire on net, beating Hellebuyck between his legs.

Paul gave the Ottawa Senators their first lead of the game with over five minutes to play. Paul fired a shot into the top-right corner of the night for his second goal of the season.

Copp then tied the game in the early stages of the third. Paul Stastny handled the puck in the offensive zone before passing the puck to Copp, who redirected the puck towards goal but hit the post. Copp would immediately bury the puck into the back of the net.

The Jets would take the lead on a power play goal from Stastny with 4:15 left to play. Prior to the goal, Senators forward Derek Stepan lifted the puck out of play and was later called for a delay of game penalty. Stastny would soon take advantage with his first goal of the season.

Copp added a fifth goal for the Jets seconds later as he whacked at the puck several times in front of Hogberg, eventually earning his second of the night.

Stepan fired a puck from distance to put his team within one, but the goal was reviewed and eventually waved off after a Senators player was offside.

The Jets would eventually put it out of reach thanks to an empty-net goal from Scheifele with 2:09 to play in the third.

Winnipeg will be back in action Sunday night against the Edmonton Oilers. Ottawa will play the Vancouver Canucks Monday night.

NOTES: Blake Wheeler's assist on Kyle Connor's second period goal was the 500th of his career.

This report by The Canadian Press was first published Jan. 23, 2021.