Thoroughbreds are finally off and running at Woodbine Racetrack in Toronto 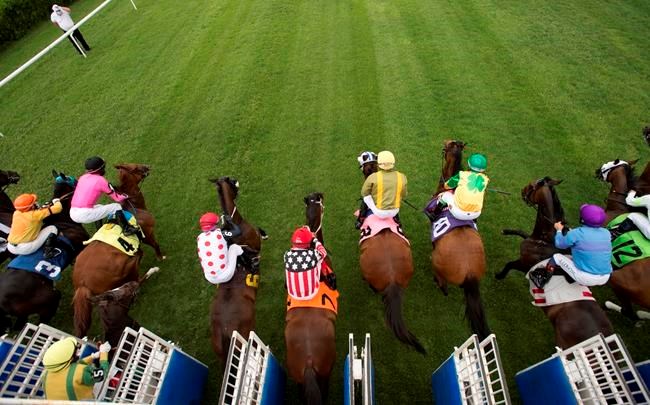 TORONTO — It certainly was worth the wait for Darryll P. Holland.

The British-born jockey earned his first career win at Woodbine Racetrack on Saturday as the 2020 thoroughbred campaign finally started minus spectators due to the COVID-19 pandemic.

"This means a lot to me because it's my first win in Canada," Holland said. "I've been galloping all week because I was in self-isolation for 14 days before that, so it’s not been easy.

"I've had to get fit very quickly and take off a bit of weight, but I'm sure there's better to come from me."

Fairywren, ridden by Luis Contreras, topped the 15-horse field in 1:08.22. It was one of three wins on the day for Contreras.

Prior to Saturday, Holland had made just three starts in graded stakes at Woodbine more than a decade ago. His previous best result was a fourth-place finish in the 2000 E.P. Taylor Stakes (Grade 1) aboard Irish-bred Alexis.

Holland has ridden in 20 countries over his career — including Canada — but will make Woodbine his home in 2020.

"It's not quite finished business but it's nice to ride a winner and get the monkey off my back so to speak and ride a winner for a good trainer (Vito Armata)," Holland said. "He had faith in putting me up even though he probably didn't know me."

It was an exciting start to racing at the Toronto oval after a lengthy seven-week delay. The thoroughbred season was scheduled to open April 18, but was postponed indefinitely due to the pandemic.

Harness racing resumed Friday night at Woodbine Mohawk Park following a 78-day hiatus. Horses ran there until March when action was suspended due to the novel coronavirus outbreak.

With the NHL, NBA, Major League Baseball and Major League Soccer all sidelined, horse racing again stole the spotlight with a sporting public that's had precious little to celebrate these past few months.

The resumption of horse racing this weekend marked the first pro sporting action in the Greater Toronto Area since March 10 when the Maple Leafs edged the Tampa Bay Lightning at Scotiabank Arena. A total of 11 races ran Saturday at Woodbine featuring 118 entries.

Prior to the first race, Woodbine's jockey colony all took a knee in support of anti-racism.

Racing at both venues was conducted minus spectators with essential personnel adhering to strict health-and-safety protocols. Jockeys and outriders both wore masks on the track although jockeys were able to remove the facial gear for actual races.

Holland rode Majestic Fever to victory in a $23,500 claiming event on Woodbine's tapeta track to kick off the season. Majestic Fever, a seven-year-old gelding, covered the five-furlong event in 59.34 seconds, finishing a length ahead of Gasconade, a 5/2 pick.

Majestic Fever ended a dismal 0-24 drought since his last win in October 2017. The victory was just Majestic Fever's third in 30 career starts.

Holland had Majestic Fever coming off the pace on the outside. Majestic Fever was able to successfully surpass the leaders for the long-awaited victory.

"Well he made hard work of it," said Holland. "I think he had 10 starts last year and never won so he doesn't know how to get his head in front, but I just kept at him.

"At the top of the stretch, he just hung far a little bit. He responded and I knew he still had a bit left in him, so I just saved that to pass the last horse and he just got there in the end. I'm very happy for all the connections."

Fort Erie Racetrack, just across the border from Buffalo, N.Y., opened its racing card Tuesday, generating $2.09 million in wagering. That's up 70 per cent over last year's opening day and was second only to the $2.18 million generated at the 2016 Prince of Wales Stakes, the second jewel of Canada's Triple Crown.

Racing also began Wednesday at Belmont Park in Elmont, N.Y. The New York Post's sports front Wednesday featured a horse-racing picture with the headline, "And they're off! Sports back in NYC as Belmont reopens today."

And on opening day as the horses took off, track announcer John Imbriale said, "We can finally say they are off and running at New York’s Belmont Park."

This report by The Canadian Press was first published June 6, 2020.