Toronto FC in need of a win, with defending champion Columbus SC up next 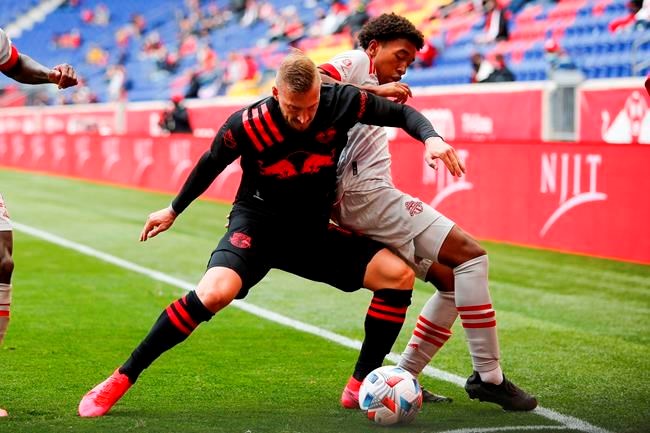 Being winless three games into the MLS season for the first time since 2012 is not sitting well with Toronto FC.

"We want to win. This is a room full of winners," coach Chris Armas said with passion Tuesday. "When you look around the room, this is what it is. And I'm with those guys.

Toronto (0-2-1) looks for its first victory Wednesday against defending champion Columbus SC (1-0-2) in a matchup between two clubs that have had to balance MLS and Scotiabank CONCACAF Champions League play while dealing with a lengthy injury list.

The good news is Toronto's training room is beginning to empty. But reigning league MVP Alejandro Pozuelo is still working his way back from a thigh injury suffered before an April 2 pre-season game against Columbus. The Spanish playmaker, adept at unlocking opposition defences and making his teammates better, has been sorely missed.

"It's a quad issue," Armas explained. "So it's some soft tissue, a tendon in his quad. It doesn't give him much pain but we know it's there."

While the injury is "relatively minor," it needs time to heal so: it doesn't become something bigger.

Pozuelo is currently training on his own.

"If you ask him, he's ready yesterday. He wants to be out there," said Armas.

Midfielder Jonathan Osorio (thigh), another important part of the TFC puzzle, is listed as questionable, with Armas suggesting he may need a little more time to recover.

Star striker Jozy Altidore is back in full training after having recovered from the bout of illness that has kept him out of the last two games. Altidore has 74 goals in all competitions for TFC, nine short of Sebastian Giovinco's club record.

Striker Gyasi Zardes (shoulder), who has seen just 33 minutes action in the last two games, is questionable with a shoulder injury but says he will play through the pain. Midfielder Pedro Santos (knee) and former TFC defender Josh Williams (shoulder), who both started last time out in a 3-1 win over D.C. United, are also listed as questionable.

"With the injuries we have we don't have a ton of options" said Columbus coach Caleb Porter. "So can we find a way to get a result in this game knowing that we're probably going to be in the next three days in a better position in terms of personnel decisions and selections and health."

Porter says given the current schedule crunch, rotating his roster is important. The Toronto match, at Orlando's Exploria Stadium, is Columbus's fourth in 12 days with a trip Sunday to New England to follow.

"This is one (game), for sure, that we have to be smart with because guys are starting to get cooked," said Porter. "And this is where you get injuries."

Toronto is playing its third game in nine days with a match at New York City FC to come Saturday. Armas's club is 1-4-2 in all competitions in 2021.

While Columbus has just one win and two ties in MLS play, it can point to being unbeaten in eight straight matches (6-0-2) counting last season's playoffs. The club has outscored the opposition 14-4 during that run with five clean sheets.

Both sides were involved in Scotiabank Champions League play and would have met in the final four had they survived Mexican opposition in the quarterfinals. But Columbus was beaten by Monterrey (5-2 on aggregate) and TFC lost to Cruz Azul (4-1).

While it is a small sample size, TFC's defence needs to tighten up. It is 26th in the league in goals conceded, averaging 2.67 a game. Goalkeeper Alex Bono has been in goal every minute so far and has not played poorly — but compare his 2.67 goals-against average to Columbus 'keeper Eloy Room's 0.33.

"I know we've been in every game," said Armas, who sees the bigger picture.

"The talk and the feeling was we have to make the work start adding up. To keep minimizing some of the mistakes and maintain our focus and concentration. And then just reward ourselves, with some of the good work being done.

"The effort is there … We're going to start making the work into points. It starts (Wednesday) night."

Columbus opened the season with scoreless draws against the Philadelphia Union and CF Montreal.

REBRANDING: Columbus's recent rebrand now has the team's name as simply Columbus SC, with the word "Crew' dropped. Somewhat confusingly, the club says the team can still be referred to as the Crew.

FORM: Toronto FC has lost just one of its last nine matches (5-1-3) against Columbus (including the 2017 playoffs). TFC has won its last two games against Columbus — the only time it has won three in a two against the Crew was in 2014-2015.

This report by The Canadian Press was first published May 11, 2021.