Check Out The Dark Side of Grill for The Lightest Delights

“A lot of my family has a farming heritage,” says Mel. We were raised on Alberta beef. BBQ came second nature and it was easier to cook on the BBQ than in the oven, even as a kid.”
Great West Media I Presented by RV City Apr 27, 2021 7:00 AM

Mel Chmilar Jr.’s major childhood memories revolve around camping. He was born and raised in Edmonton but as soon as spring hit, the family was off on their camping adventures. He carried this love of camping and the great outdoors into adulthood, and now, as soon as the grass starts to turn green and winter turns to spring, you’ll find him, his family, and the Big Green Egg® enjoying the beauty Alberta has to offer.

Mel explains, “The Big Green Egg is built for camping. It can cook anything be it baking, frying, grilling, or smoking. It’s not just a barbeque, lots of chefs use it even in restaurants. It’s small enough to be portable so you can take it anywhere. It has handles and can be set up on a picnic table.”

He’s a Big Green Egg ambassador not only because he believes so strongly in the brand, but because of his vast camp grilling experience.

“A lot of my family has a farming heritage,” says Mel. We were raised on Alberta beef. BBQ came second nature and it was easier to cook on the BBQ than in the oven, even as a kid.”

When it comes to cooking while camping, he shares his experienced advice. “My best tips for BBQ while camping is to choose the meat products in advance that are going to be natural meals you can easily pull off. A lot of times people bring stuff out of the freezer and that makes it more difficult to cook. Plan your meals ahead of time. I strongly suggest investing in a good cooler, one that will keep ice for more than couple days, and invest in good reusable ice packs. They now sell ice packs that are good for five days at freezer temperatures. You shouldn’t rely just on ice; especially for food safety, ice is not your friend. Packs are good without waterlogging your cooler. Save the ice for the drinks!”

With COVID limiting travel, now is the perfect time to rediscover our beautiful province while safely spending time outdoors.

“People, especially Albertans, take for granted the views and surroundings we have just a couple hours away,” says Mel. “I strongly suggest people get out there and get to know what is farther than your next town. Get out and explore Alberta. There are tons of tourist attractions like the Hoodoos. Park your RV there for a night and travel around a bit. Set up your grill and take it all in. You can go from the mountains to the badlands in a couple hours. In a week, just around Alberta you can hit every type of landscape you can think of. It’s amazing.”

When you set up that grill, be sure to try Mel’s own recipe for beer corn.

“First you start with some fresh corn on the cob. Peaches and cream or sweet corn work best. Do not peel the husk from the corn, leave it on there. Chop about an inch off the end of the corn so that the cob is exposed a bit. Twist and loosen the husk so that it separates from the skin just enough to allow the beer inside. After that, peel the loose husk pieces off – leave everything else.

“Place the corn in a large Ziploc bag and pour a bottle of beer into the bag (whichever beer you prefer). Let it soak for one to two hours. Be sure to seal it with no air in the bag. Work the beer around the bag to make sure it’s distributed evenly. Place it in the fridge and take it out in one hour to move the beer around some more.

“After marinating, heat your grill or Big Green Egg to 300/325 degrees. Place the corn on indirect heat. Check the corn in 30 minutes. You will want to see the husk separating a little bit from the corn and the kernels getting soft.

“Once they are ready to pull off of the grill, wrap them in tin foil and let them rest for five minutes. After resting, peel the husk away from the corn; you can keep the husk on as a handle. Eat and enjoy!” 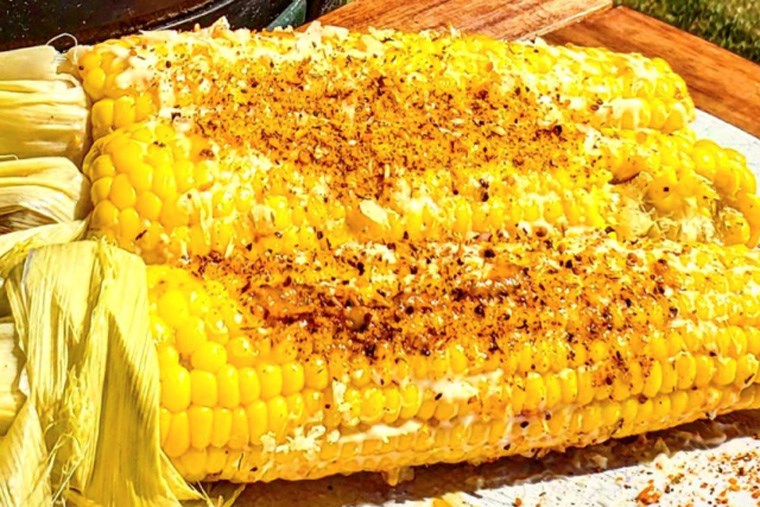 But that’s not all. Mel adds, “To kick that corn up a notch, try this Mexican street corn seasoning. Evenly distribute mayo all over the corn. I prefer Kewpie mayo for this. Add shaved parmesan or cojita cheese, Tanjin, or your favourite BBQ rub – as much as you would like. Add bacon bits, fresh chives, and your favourite hot sauce. This will be the best corn you will ever have… I hope!”

Mel has even more recipes on his bio page of the Big Green Egg website. Be sure to tag him using @darksideofthegrill and #melsbeercorn to show off your success!

This spring and summer be sure to check out Alberta’s beautiful campgrounds and treat yourself to delicious grilled meals along the way. Learn more about Mel on Instagram, and more about the Big Green Egg on their website.