The long road to recognition

When Karen Wintonyk sold the uniform of a local Second World War veteran five years ago at a garage sale, she did not know what she was giving up.

When Karen Wintonyk sold the uniform of a local Second World War veteran five years ago at a garage sale, she did not know what she was giving up.

The uniform belonged to Nick Evasiuk, who fought with the VIII Recce Squadron in the Netherlands during the Second World War before coming to live in Athabasca in 1946. The battle-worn garment ended up on eBay in March, before being sold to a collector in the Netherlands who lived where Evasiuk fought.

“I didn’t really know anything about the uniform. It was just a uniform. It was kind of there, so it really didn’t have any intrinsic value to me,” Wintonyk said in about why she originally sold the uniform in an interview. “It’s too bad we hadn’t known more about it.”

“He wanted to make sure that the stuff was taken care of,” Wintonyk said. “He just felt he was honouring his best friend by taking care of the stuff after he passed away.”

However, Wintonyk said her family decided not to keep all of the items. The rest of Evasiuk family did not want all of his old possessions and so they decided to sell off many of the items part of the estate, she said.

“You can’t keep it all. I think by purchasing it, he could go through stuff and just see where the things were that needed to go to the family,” Wintonyk said.

One of the items sold off was the uniform – which Wintonyk said went for about $20 or $25 dollars to an unknown buyer.

“When I think about it, kind of too bad we didn’t do a little more research and didn’t know more about it,” Wintonyk said.

Evasiuk was born and raised in Manitoba, working as a teacher in the 1930s before serving in the Second World War, according to his obituary published in the Athabasca Advocate May 20, 1997.

He moved to Athabasca in 1946 to join his father-in-law, Mike Demchuk, in running Mike’s store, which he did for 30 years.

“He was an extremely intelligent man. He was well read. Just very bright, exceptionally,” Athabasca local Maxine Winder, who knew Evasiuk, said in an interview. She added he was helpful, writing letters for her grandmother in Cyrillic language and sending them to Ukraine.

Evasiuk participated in many community activities, including the Royal Canadian Legion and school board membership, his obituary said.

He also self-published books of poetry, which tended to focus on the environment. One such book, Athabasca and The World, has a spot in the Athabasca Archives.

The poems discuss themes of environmentalism and makes apologies to environmentalist David Suzuki and George Ryga, another local writer who was most famous for his work on Indigenous experiences. 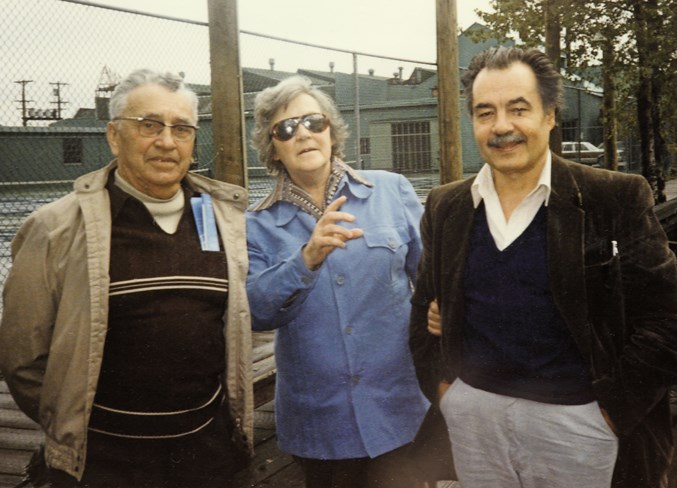 Nick Evasiuk (left) stands alongside Nettie Evasiuk and George Ryga (right). According to Gina Payzant, the couple was vacationing alongside George Ryga and his wife in British Columbia in 1986.

Athabasca archivist Gina Payzant said the archives do not have much material about Evasiuk or his military history. But she said his left-leaning viewpoints might have something to do with that.

“This is, or was, whatever you want to think, a really staunch, pretty right-wing community,” Payzant said in an interview, referring to Athabasca.  “A lot of the left-wing stuff that he believed in wasn’t readily accepted, and that I believe is why we don’t have a lot of stuff (on Evasiuk).”

Today, Evasiuk’s name lives on in an Athabasca University scholarship. The $500 Nick Evasiuk Scholarship in Sociology is awarded annually at the university to the individual student with the highest grade in the university’s Introduction to Sociology course.

The description for the award on the Athabasca University website said it was established to honour his contributions to the community of Athabasca.

“A longtime businessman and social democrat, he will be remembered as a very special person, a poet, advocate of peace and justice, and friend of the environment,” the description said.

The description said Evasiuk once described himself as “sort of a visionary, a person of hope … my hope springs from my faith in the ability (of humankind)… to come up with solutions to the problems which our generation has perpetrated.”

Local Joan Sherman is one of the sponsors for the award and said she knew Nick Evasiuk. Sherman described him as a socially progressive man.

“He was very concerned about fairness and getting a better deal for the underprivileged,” Sherman said in an interview, adding he was also “inquisitive, thoughtful and generous.”

She said she spoke to Evasiuk regularly at Mike’s Store, but did not recall him ever mentioning his experience in the military.

“I don’t recall him ever talking about being the military,” Sherman said. “It was news to me, and I can understand people who have gone through horrible situations don’t like to talk about it.”

Uniform goes up for auction

Five years later after Wintonyk sold the uniform, it attracted the attention of collectors when it emerged on eBay for auction, she said.

Chris LaBossiere of Edmonton was one of those collectors, as was his friend René Boers of the Netherlands.

LaBossiere connected with his friend's mother, Winder, and was interested in trying to find Evasiuk’s family so the uniform could be returned to them.

“In the end, he couldn’t find anyone that was family,” Winder said, noting that it stayed on eBay.

The uniform was ultimately purchased by a collector from Belgium, who Boers then later purchased the uniform from, he said. LaBossiere contacted Boers after the purchase, and put him in contact with Winder. 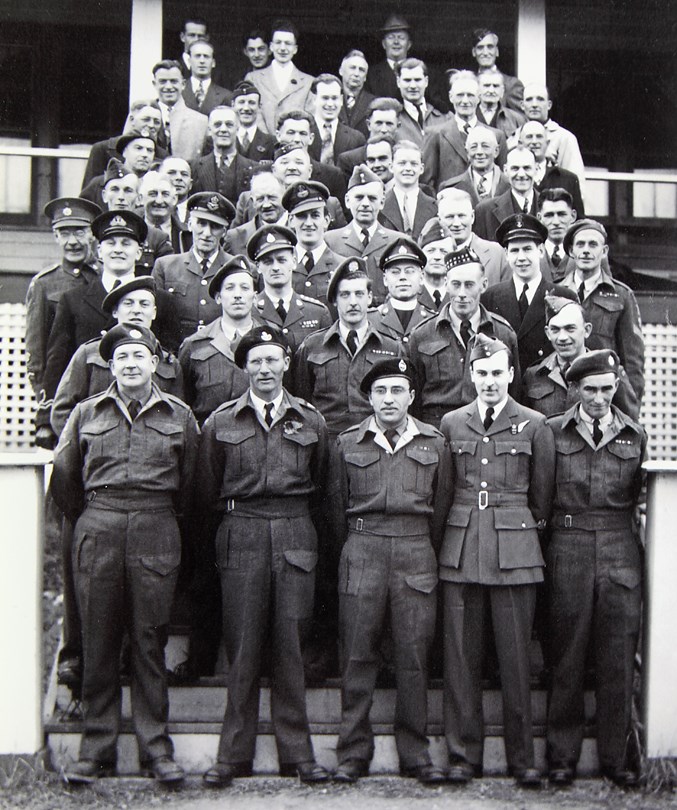 Nick Evasiuk (front row, centre) stands with a military unit. The photo was dated 1948, according to John Payzant, and is assumed to have been taken back in Canada after World War II. 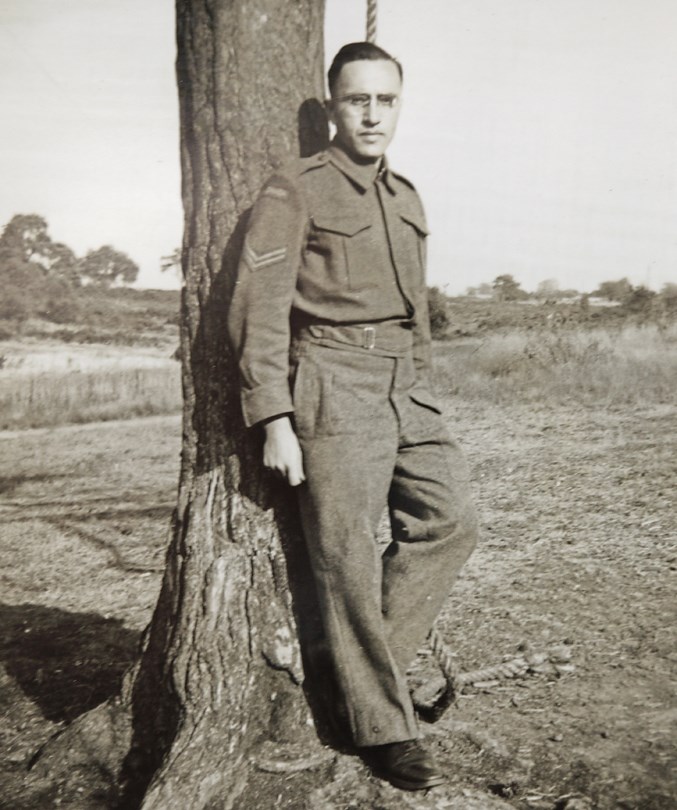 He recognized the uniform as belonging to the VIII Recce. He said his interest in the unit stems from their history liberating towns in the Netherlands from German occupation.

“I was born in a town called Westerbork and they liberated Westerbork, and also a Jew camp nearby,” Boers said in an interview, referring to the Westerbork camp, used as a transit camp for Jewish refugees during the Second World War, according to the American Holocaust Museum website. The site would be liberated by Canadian forces in 1945.

Boers said he would like to have the uniform displayed in the museum now situated at the former Westerbork camp.

“It belongs in a museum,” Boers said. “The museum can display it if they want, if they ask.”

The medals that were part of Evasiuk’s uniform were not originally sold, according to Wintonyk. But after the uniform was sold on eBay, Wintonyk said she went through her belongings and found those medals, later opting to send them to Boers free of charge.

“The medals belong with the uniform,” Wintonyk said.

Boers said he was honoured about the gesture.

“Normally, it’s gone,” Boers said about medals on uniforms. “It’s really, really, really nice of them. I have no words for that. That’s so cool.”

Payzant said the story of Nick Evasiuk and the journey his uniform has taken is “remarkable.”

“It’s a remarkable example of the human pageant. It’s remarkable that Nick Evasiuk participated in it (the Second World War) and had that experience to be an outstanding citizen of Athabasca in his time,” Payzant said.

Editor's note: An earlier version of the story stated that Chris LaBossiere was Maxine Winder's son. The Advocate apologizes for the error.

Get Ready for the Rotary Club of Athabasca’s Celebrity Dinner and Auction
Sep 14, 2022 8:00 AM

Hearing Assessments and Aids are Accessible and Affordable
Sep 12, 2022 8:00 AM