What makes for the ultimate road trip? Hitchhiking, truck stops, angry bears, prickly porcupines and a golfing goose with a duck caddy.
Oct 4, 2010 12:00 AM By: Westlock News Staff 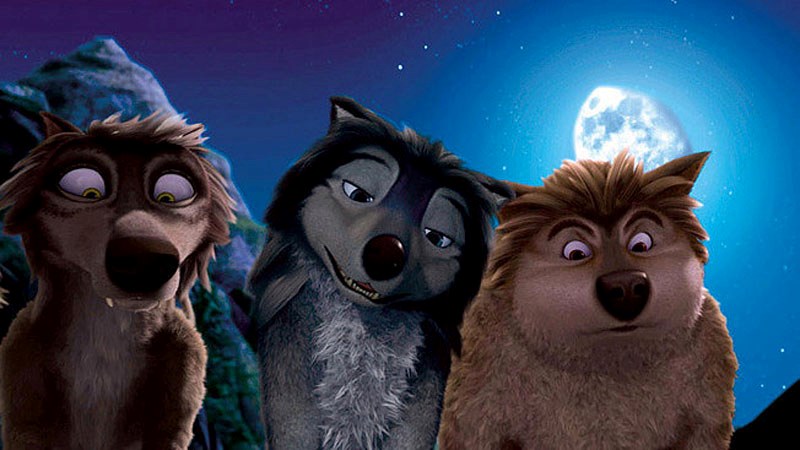 Kate and Humphrey are two wolves who are trying to get home after being taken by park rangers and shipped half way across the country.

What makes for the ultimate road trip? Hitchhiking, truck stops, angry bears, prickly porcupines and a golfing goose with a duck caddy. Just ask Kate and Humphrey, two wolves who are trying to get home after being taken by park rangers and shipped halfway across the country. Humphrey is an Omega wolf, whose days are about quick wit, snappy one-liners and hanging with his motley crew of fun-loving wolves and video-gaming squirrels. Kate is an Alpha: duty, discipline and sleek Lara Croft eye-popping moves fuel her fire. Humphrey's motto — make 'em laugh. Kate's motto — I'm the boss. And they have a thousand miles to go.

Social worker Emily Jenkins (Renée Zellweger) is assigned to investigate the family of 10-year-old Lilith Sullivan (Jodelle Ferland), as her grades have declined and an emotional rift with her parents has emerged. Emily suspects the parents have been abusing Lilith, and proposes to her department to take the child away from her parents' custody. Emily saves Lilith with the help of Det. Mike Barron (Ian McShane).

In a happy suburban neighbourhood surrounded by white picket fences and flowering rose bushes sits a black house with a dead lawn. Unbeknownst to the neighbours, hidden deep beneath this home is a vast secret hideout. Surrounded by an army of mischievous little minions, we discover Gru (Steve Carell) planning the biggest heist in the history of the world — stealing the moon. Armed with his arsenal of shrink rays, freeze rays and battle-ready vehicles for land and air, he vanquishes all who stand in his way. That is, until the day he encounters the immense will of three little orphaned girls who look at him and see something that no one else has ever seen: a potential Dad.

Devil is a supernatural thriller with M. Night Shyamalan's signature touch. Devil stars Chris Messina, Geoffrey Arend, Logan Marshall-Green, Bojana Navokovic and more. In the film, a group of people is trapped in an elevator, and one of them is the devil.

After a little white lie about losing her virginity gets out, a clean cut high school girl (Emma Stone) sees her life paralleling Hester Prynne's in The Scarlet Letter, which she is currently studying in school — until she decides to use the rumour mill to advance her social and financial standing

Just give'er, eh? In Calgary, Terry (David Lawrence) and Dean (Paul Spence) are tired of barely scraping by. Their old buddy and party leader, Troy (better known as Tron) (Andrew Sparacino) gets them jobs in Fort McMurray. Flush with money and confidence, Terry starts dating Trish (Terra Hazelton), a waitress at the local strip bar. Dean plays up the part of the cancer survivor, and decides to defraud Workers' Compensation. When Terry moves in with Trish, Dean does his best to save his friend from trading into a domestic lifestyle.

Dom Cobb (Leonardo DiCaprio) is a skilled thief, the best in the dangerous art of extraction: stealing valuable secrets from deep within the subconscious during the dream state when the mind is at its most vulnerable. Cobb's rare ability has made him a coveted player in this treacherous new world of corporate espionage, but it has also made him an international fugitive and cost him everything he has ever loved. Now Cobb is being offered a chance at redemption. One last job could give him his life back but only if he can accomplish the impossible — inception. Instead of the perfect heist, Cobb and his team of specialists have to pull off the reverse; their task is not to steal an idea but to plant one. If they succeed, it could be the perfect crime.

Based on the beloved books by Kathryn Lasky, the film follows Soren, a young owl enthralled by his father's epic stories of the Guardians of Ga'Hoole, a mythic band of winged warriors who had fought a great battle to save all of owlkind from the evil Pure Ones. While Soren dreams of someday joining his heroes, his older brother, Kludd, scoffs at the notion, and yearns to hunt, fly and steal his father's favour from his younger sibling. But Kludd's jealousy has terrible consequences — causing both owlets to fall from their treetop home and right into the talons of the Pure Ones.

Twelve-year-old Owen (Kodi Smit-McPhee) is viciously bullied by his classmates and neglected by his divorcing parents. Achingly lonely, Owen spends his days plotting revenge on his middle school tormentors and his evenings spying on the other inhabitants of his apartment complex. His only friend is his new neighbor Abby (Chloe Moretz), an eerily self-possessed young girl who lives next door with her silent father (Richard Jenkins). A frail, troubled child about Owen's age, Abby emerges from her heavily curtained apartment only at night and always barefoot, seemingly immune to the bitter winter elements. Recognizing a fellow outcast, Owen opens up to her and before long, the two have formed a unique bond.

Holly Berenson (Katherine Heigl) is an up-and-coming caterer and Eric Messer (Josh Duhamel) is a promising network sports director. After a disastrous first date, the only thing they have in common is their dislike for each other and their love for their goddaughter, Sophie. But when they suddenly become all Sophie has in the world, Holly and Eric are forced to put their differences aside. Juggling career ambitions and competing social calendars, they'll have to find some common ground while living under one roof.

In the latest installment, Nanny McPhee appears at the door of a harried young mother, Mrs. Isabel Green (Maggie Gyllenhaal), who is trying to run the family farm while her husband is away at war. But once she's arrived, Nanny McPhee discovers that Mrs. Green's children are fighting a war of their own against two spoiled city cousins who have just moved in and refuse to leave.

Resident Evil: Afterlife picks up where the third film ended. Alice has been roaming the world searching for any remaining survivors in a world dominated by zombies. She also comes face to face with her arch-nemesis, Albert Wesker, for the first time in the series. As she enters the ruined Los Angeles, she stumbles onto the zombie-infested base of Umbrella.

The film tells the story of the Penny Chenery and her National Museum of Racing and hall of fame racehorse, Secretariat who, in 1973, became the first horse in 25 five years to win the Triple Crown of Thoroughbred Racing. Penny Chenery took over the financially troubled Meadow Stable from her ailing father and guided the horse through his Triple Crown season. Other key characters are trainer Lucien Laurin and jockey Ron Turcotte.

Feeling anguish over being dumped by his girlfriend Erica, Harvard sophomore Mark Zuckerberg decides to create a university version of Hot or Not. Inspired by his technical knowhow, Harvard classmates, the Winklevoss twins, come to him for help in starting 'Harvard Connection,' an online community for Harvard students. Perfecting this idea, Zuckerberg takes their idea to create 'The Facebook,' immediately becoming a runaway campus success. Infuriated by Zuckerberg's betrayal, his classmates decide to bring him to federal court on charges of intellectual property theft. In his pursuit to create the most popular website on the internet, Zuckerberg burns multiple bridges to get his way.

In inner city London, a street dance crew is on the verge of breaking up after its leader, Jay, leaves the group unexpectedly. The group loses the use of their rehearsal space, forcing them to try and raise money or practice in other locations. Eventually they secure a space in a ballet school, on the condition that they include five ballet dancers in their routine. At first, they struggle to get along, but they all become friends in the end.

Kassie (Jennifer Aniston), a smart, fun-loving single woman who, despite her slightly neurotic best friend Wally's (Jason Bateman) objections, decides it's time to have a baby — even if it means doing it by herself … with a little help from a charming sperm donor (Patrick Wilson). But, unbeknownst to her, Kassie's plans go awry because of a last-minute switch that isn't discovered until seven years later when Wally finally gets acquainted with Kassie's precocious — though slightly neurotic — son.

Doug MacRay (Ben Affleck) is an unrepentant criminal, the de facto leader of a group of ruthless bank robbers who pride themselves in stealing what they want and getting out clean. With no real attachments, Doug never has to fear losing anyone close to him. But that all changed on the gang's latest job, when they briefly took a hostage, bank manager Claire Keesey (Rebecca Hall). Though they let her go unharmed, Claire is nervously aware that the robbers know her name and where she lives.

Set in New York City, the film takes place 23 years after the original, revolving around the 2008 financial crisis. The film's plot mainly centres around the reformed Gordon Gekko (Michael Douglas) acting as more of an antihero rather than a villain and follows his attempts to help Wall Street before its soon-to-be stock market crash as well as trying to repair his relationship with his daughter Winnie with the help of Jacob, Winnie's fiancé. In return, Gekko helps Jacob get revenge on the man he blames for his mentor's death.