Council passes municipality’s operating and capital budgets at its Dec. 9 meeting
0
Dec 18, 2019 8:34 AM By: George Blais 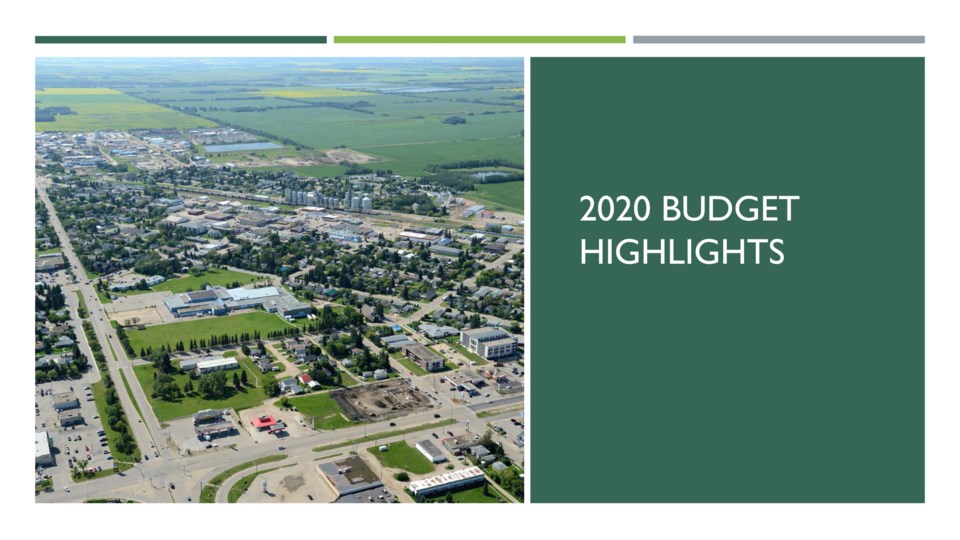 The Town of Westlock’s 2020 operational and capital budgets were unanimously passed by councillors at their Dec. 9 meeting. Ultimately, town ratepayers face a 1.95 tax increase in 2020, plus a $.06 water rate hike.

WESTLOCK - Residential and commercial Town of Westlock ratepayers face a 1.95 per cent tax increase in 2020, while water rates are set to jump $.06 per cubic metre April 1.

In addition, construction will start on the West Industrial Storm Pond in 2020, a $2.6 million project, while $1,168,390 remains earmarked for the replacement of the municipality’s ladder truck and close to $630,000 worth of work is planned for roads and sidewalks in the East Business Park.

Although mayor Ralph Leriger, and council as whole, know a tax increase is never popular, they stand behind the budgets. In the face of declining provincial grants — they’re down $50,000 with the elimination of STEP grant, lowering of the grant in lieu of taxes and a decline in fine revenue sharing  — they’ve trimmed and saved where they can without cutting services, except for the elimination of $21,000 in funding for the Visitor Information Centre at the Pioneer Museum.

Museum officials and the town will be meeting in the new year to discuss the cut and work on a solution.

Also, come June 1, 2020, the town is working on re-institution of a charge for residents who exceed 500 kilograms of waste taken to the landfill yearly — again, more details will be rolled out in the new year.

“Nobody likes to see a tax increase, but honestly I think this was the best we could do given the circumstances. Anybody who wants to talk about it, my door is always open,” said Leriger following the meeting. “We’re going to face some challenging years to come and we’re going to have to have some real honest-John discussions about service levels and expectations.”

“Kudos to administration, we know we have some things out of our control no matter what we do operationally. We realistically have to find operational efficiencies every year and that really has been the reality for not just this budget, but the last few budgets for sure,” added Coun. Murtaza Jamaly. “I applaud administration in finding ways to make these budgets work without massive tax increases. I say to residents on a regular basis that if all things remain status quo, the cost of providing services will go up whether we like it or not … that’s the reality. We have two options: raise taxes, or find operation efficiencies and we find a blend of both to make it sustainable.”

Combined they add up to residents paying, on average, an additional $5.17 per month.

“Our citizens will always be concerned about (a tax increase), but we did our best to keep it as low as possible. We realize it’s tough out there,” said Coun. John Shoemaker. “This is the seventh year (on council) for most of us and over those years we’ve raised the mill rate 20.58 per cent, but of that 5.5 was for policing and one per cent was for the carbon tax. So we’ve really increased it 14 per cent for general spending, which equates to about two per cent a year, on average. Now, two per cent for me isn’t that bad, but it’s easy for me to say. For a lot of people two per cent is a lot and I feel for them.”

What residents actually end up paying on their 2020 tax bills won’t be known until property assessments are done in the spring, and Homeland Housing and the province submit their requisitions for senior housing and education. For 2021 and 2022, the budget proposes tax increase of 2.4 per cent.

“The bottom line is that amortization is a number you really don’t budget for. It’s a number in our expenses, but we don’t need any tax dollars to pay for it. It’s a bookkeeping entry. But we do have to include it as part of our budget,” Shoemaker explained.

“Operationally it’s been a pretty status-quo budget as we expected in this economic time. I applaud administration for maintaining the service level and in some cases even increasing service levels,” said Jamaly.

Union and non-unionized employees will receive a 1.25 per cent wage increase in 2020, while the mayor and council will not get a salary increase in 2020, noted Coun. Randy Wold, and an additional $54,000 has been allocated for storm sewer maintenance.

The town is also wrestling with a budgeted 10 per cent increase to its facility insurance rates, plus a seven per cent average to its electricity bill.

“Our operating budget is pretty much status quo — it doesn’t change much from year to year. We task our administration with presenting a budget that meets the goals and objectives of our strategic plan which we’ve held true to since we did it. At the same time we try and meet the service level expectations of our residents and improve our financial position over time,” said Leriger.

Dollar-wise the Westlock Industrial Storm Water Infrastructure Project at $2.6M and the ladder truck replacement, pegged at $1,168,390, top the 2020 $7,230,398 capital budget — both are ongoing/carry-forward projects.

“Since 2016 flooding and drainage have been a massive concern for the general public and this stormwater pond is going to be a big deal. It’s a unique project for the community and will hopefully solve a lot of our drainage problems and it’s also going to solve issues in the industrial park in terms of roads and infrastructure there,” said Jamaly.

“It’s a really forward-thinking project that gets us to a place where we can have a good foundation in place for drainage infrastructure down the road.”

“We want to take the public stance as a community and a region that agriculture is a significant resource in this province and certainly one that’s important to this town and this region,” added Leriger.

As well there’s more than $600,000 worth of work planned for the east side of town — $316,500 is allocated for 113th Avenue south servicing extension and $315,000 is pegged for 100th Street (Highway 18) service road improvements. Some of the work scheduled includes a service road pull out in front Tim Horton’s and a sidewalk running from the 108 Street lights along the service road to 113 Ave and south to the Alberta Works building.

“I just want to note the work in the East Business Park with improvements to protect what’s already there and the other part of the accessibility is important. This will hopefully make things easier for people,” said Coun. Curtis Snell.

Added Leriger: “These are in direct response to feedback from the community trying to get up to Service Alberta and Timmy’s and locations down there, besides the fact that if we don’t do something to protect that road we’re going to lose it.”

A power rake and tractor, with a combined cost of $66,500, is also set to be purchased as part of a new lane/back alley program.

“I think the laneway program is something we’ve had trouble with for a long, long time and one of our biggest complaints. But we have a new operations director who’s looked at it and come up with a reasonable plan to fix the back alleys and keep people happy,” said Coun. Clem Fagnan.

“We’ve talked about some of the major concerns operationally that residents have had … we’re putting more money into lane programs to deal with back alleys that just aren’t cutting it. We’re putting money into storm water programs, back-flow prevention and ensuring basements aren’t flooding — we’ve heard that loud and clear,” added Jamaly. “As much as it’s a status-quo budget we’re really trying to allocate as many resources to the places that are concerns to residents with the limited dollars we have.”

Leriger says the figures, and the projects highlighted in the later years, will likely change as the town is currently working on a transportation master plan and asset management plan.

“We’re required by the province to give a five-year capital plan, but council only sits and looks at the next upcoming year in great deal. We have an outlying idea of what’s coming up, but they’re subject to change based on government funding cutbacks, if some of our roads fall part … there’s so many things that can go sideways on us,” added Shoemaker. “And I stress that some of the numbers on those sheets may or may not get approved. But that’ll be up to the council of that time five years down the road.”

Council and administration met in early September to discuss the overall direction and operating service levels. From there the CAO and admin staff reviewed a first draft of the budget Oct. 2, then crafted a second draft by mid-month.

Following, council and admin held a two-day planning session to ensure the priorities, service levels and organizational structure supported the goals and objectives of the town strategic plan.

“I think administration and all the department heads should be complimented on all their hard work —(finance director) Julia (Seppola) in particular. I thought it was a great job,” said Shoemaker. “It’s so much different for our first budget. There was a whole bunch of pie-in-the-sky items and we’d say, ‘You want what?’ We’ve come a long ways building rapport with administration  and our staff and they come back with reasonable requests.”

Added Leriger: “That’s an important point, because there’s mutual respect. But I think it stems from a good strategic plan and sticking to it. I fail to see the exercise of putting forth a budget with a large tax increase and a bunch of nice things that nobody, council or administration, has any intention of going forward with. And then you beat your chest and beat it down to a reasonable level and say, ‘Hey look what we did!’ To me this is a far more respectful way for the process to occur.”

Council and administration point to the municipality’s strategic plan for providing clarity and direction during the budget process.

“I think the strategic plan helps administration and guides us to what council’s priorities are and then the communication we have with council allows us to not have to go through the exercise of us bringing you something big and you say ‘No, that’s not what we wanted,’” said Wiley. “We skip all of that because we communicate regularly. We all know what the priorities are and what you’re looking for.”

“When you get both sides working together, it’s a lot easier,” added Fagnan.

Westlock County considers options for Pembina River flood hazard map
Feb 20, 2020 12:34 PM
Comments
We welcome your feedback and encourage you to share your thoughts on this story. We ask that you be respectful of others and their points of view, refrain from personal attacks and stay on topic. To learn about our commenting policies and how we moderate, please read our Community Guidelines.