That snowstorm that Environment Canada said dropped over 12 centimetres of snow on the Westlock area last Tuesday and Wednesday, paralyzing the streets and frustrating residents, also did a number on the Town of Westlock’s snow removal program.
Dec 20, 2010 12:00 AM By: Town And Country Today Staff 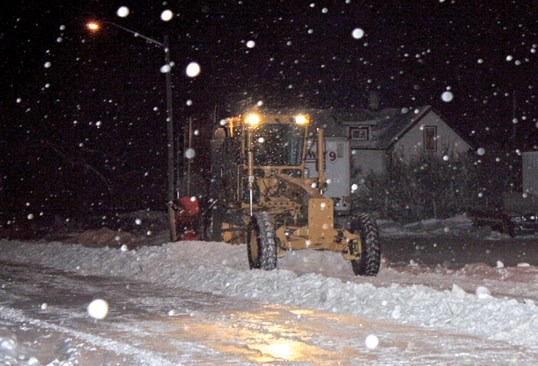 Town crews have been busy this past week, clearing snow from residential and main streets.

That snowstorm that Environment Canada said dropped over 12 centimetres of snow on the Westlock area last Tuesday and Wednesday, paralyzing the streets and frustrating residents, also did a number on the Town of Westlock’s snow removal program.

“This is the biggest dump of snow we’ve had, I think according to some records, since 1966,” said mayor Bruce Lennon. “It’s pretty extreme.”

Lennon said the biggest problem with clearing the roads through town is that the snow didn’t come in one shot, but rather in two. Thus, the town was in the middle of cleaning up from the first snowfall when the second hit, essentially undoing all the town’s work to that point.

In short, the municipality has been scrambling to catch up with its cleaning, which has left the downtown under snow for longer than it normally would have been.

However, that hasn’t stopped some business owners from taking matters into their own hands and hiring snow removal services to clean out in front of their businesses.

Todd Arth is one of those proprietors in the downtown. He hired someone to clear the snow out from in front of Arth’s Fashion Centre because he was tired of waiting for the town.

“I did it because the town won’t do it until they get around to doing it,” he said Friday afternoon. “We were told they weren’t going to clean the streets up until Saturday night. There’s a lot of upset business owners in downtown Westlock today.”

He added he needed the area clean, as did other businesses, because this past weekend was the biggest retail weekend before Christmas, and people need to be able to go out without the risk of getting stuck on the road.

Lennon said he is sympathetic to the concerns of not only the local businesses, but also all residents who have been affected by the slower response to clearing the snow.

“I know people are frustrated,” he said. “But you can only do so much. People have to remember, this is the extreme amount of snow for our area in a number of years.”

The town’s plan for clearing the streets in a systematic way has been in place for many years, Lennon said, but it is always being tweaked as circumstances change.

“There’s a format that they use. They have to do bus routes, for ambulance and for fire. That’s a priority, obviously,” he said. “Then they try to get the downtown completely done and then they work on the main arteries in the residential area. Then after they’ve done that they can start working on the minor streets, the less-used streets.”

The snow-clearing process is also determined by the limits on machinery and available staff, Lennon said. There are only so many pieces of equipment to clear the streets, and more importantly there are limits on how many hours the workers who operate the machinery are legally allowed to work.

It’s important to realize the town is doing the best it can, he said.

Whereas the pulse of the town has been hindered by the big snowfall, Westlock County has experienced a different adventure with its snow-clearing efforts.

“To date, all the roads are open as of this morning and now we’re doing cleanup and we should have that done by Sunday or Monday,” he said, adding the streets and alleys in the hamlets should also be cleared by Sunday.

He said county workers do one or two passes on a road to open it, clearing it enough to allow traffic to use it. On the other hand, a cleanup is more precise; it involves clearing the snow away from the road into the ditches, as well as doing the driveways of those people with the appropriate flags.

The reason the county roads were more traversable than their town counterparts is attributed to how soon after the storm hit that crews were out working.

“When the storm was going on, our fellows worked all through the night basically, helping so that people could get through the next day,” said Mueller.

The general plan the county uses to ensure its roads are cleared in an effective manner is to clear the main arteries first, followed by the feeder routes.

Each of the county’s 11 graders has a specific district it covers, he said, and it will start at one end of its district and work its way to the other, clearing the road as it goes.

On the whole, Mueller said it takes the county roughly five days to dig out from a major snowfall like last week’s and “get everything back to where it was before.”

The only message he has for residents is to be patient and the county will get to everyone.