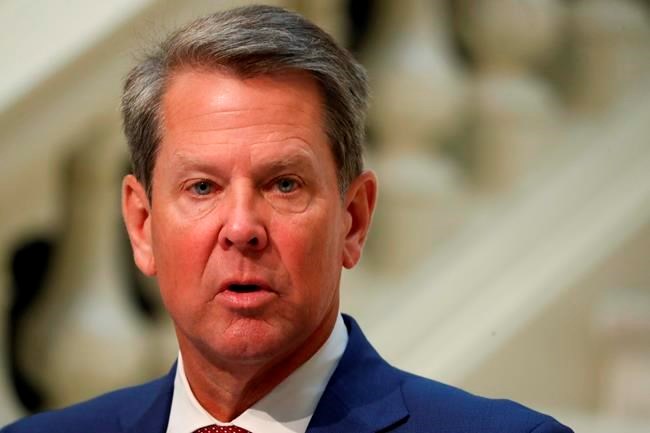 ATLANTA — Republican Georgia Gov. Brian Kemp tested negative for COVID-19 after having had “direct exposure” to someone who tested positive, but he is quarantining as a precaution, according to a statement posted to his official Twitter account Friday.

The statement said first lady Marty Kemp also tested negative and is “not known to have been exposed to a confirmed case.” It was unclear whether she was quarantining with her husband. An earlier statement from the governor's spokesman Cody Hall said she was.

In a separate announcement Friday, U.S. Rep. Drew Ferguson of West Point, Georgia, said he had tested positive for the virus.

Both Kemp and Ferguson attended a Thursday night campaign event inside a barbecue restaurant in Hogansville, Georgia, with between 100-150 people in attendance, according to the LaGrange Daily News.

Hogansville Mayor Bill Stankiewicz, who attended the event, said, “It was close quarters and Drew (Ferguson) did not have a mask on ... for much of the evening,” the newspaper reported.

CDC guidelines state that anyone “who has had close contact with someone with COVID-19 should stay home for 14 days after their last exposure to that person.” People can test positive several days after exposure even if initial tests come back negative.

It was not clear if Ferguson is the person Kemp’s statement was referring to. Hall did not respond to a phone call and text from The Associated Press seeking clarity.

Ferguson said he would self-quarantine and work from home.

Georgia has had nearly 360,000 confirmed cases of the virus. More than 7,950 people in the state have died after contracting the virus, according to data from the state Department of Public Health.

Kemp has shied away from mandating restrictions to control the virus. He was among the earliest to allow businesses to reopen and has eschewed a statewide mask mandate, including during the summer, when Georgia recorded the highest per-capita number of new infections nationwide.

Kemp did ban gatherings of more than 50 people when they can’t stay more than 6 feet (1.83 ) apart, but the governor has repeatedly violated that order in recent weeks at political rallies, including the one with Ferguson.

News of Kemp’s potential exposure comes three weeks into a new round of rising virus cases in Georgia. The daily average of newly reported COVID-19 infections was up 40% through Thursday from the most recent low on Oct. 8, according to figures kept by The Associated Press. Hospitalizations, which usually trail new infections, have been rising since Oct 12.

Neither new daily reported infections nor the number of people hospitalized with COVID-19 is yet approaching the peaks of late July. But state public health officials agree the trend is real and worrying. Kemp has spoken little about the respiratory illness since he held a news conference on Oct. 7 touting “great progress” as cases were reaching a low point.

Kemp on Friday signed a 15-day extension of the social distancing order and other rules regarding the operations of businesses and groups. Those who live in nursing homes and assisted living facilities, as well as people deemed medically fragile, must continue to shelter in place. Kemp also extended a state of emergency through Dec. 9, which gives him the power to decide what restrictions will be put in place across the state.

The governors of Oklahoma, Virginia and Missouri have previously tested positive for the virus.

Europe's Christmas dilemma: risk empty chairs next year?
Nov 28, 2020 3:17 AM
India farmers press on with protest despite offer to talk
Nov 28, 2020 3:16 AM
Comments
We welcome your feedback and encourage you to share your thoughts. We ask that you be respectful of others and their points of view, refrain from personal attacks and stay on topic. To learn about our commenting policies and how we moderate, please read our Community Guidelines.