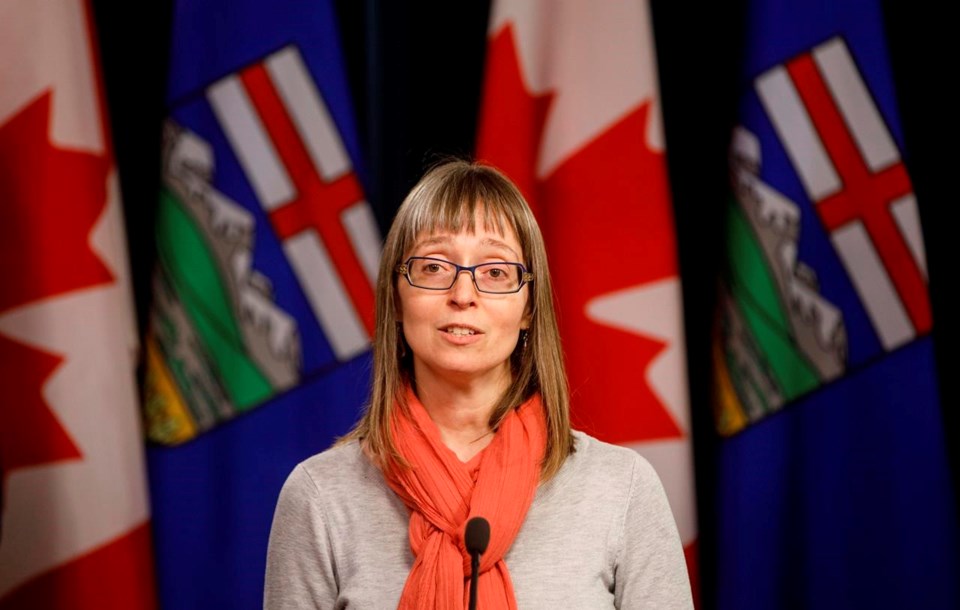 EDMONTON — Alberta announced a senior living in a Calgary long-term care centre has died from COVID-19, and others in the facility have tested positive or are showing symptoms of the virus.

"This news is extremely sad for all of us. But we are doing everything we can to limit cases of critical illness and death from this serious virus."

It's the second novel coronavirus death in Alberta, which now has 358 cases.

The woman, in her 80s, was a resident of McKenzie Towne Continuing Care Centre.

Hinshaw said one staff member and two other residents of the facility have tested positive for COVID-19, with 11 more residents showing symptoms.

The two diagnosed residents are in stable condition, while the staffer had not recently travelled abroad and did not work while symptomatic.

Hinshaw said staff in contact with the residents who tested positive will be isolated.

The facility has 150 residents on its continuing care side. The adjacent McKenzie Towne Retirement Residence is not affected.

Hinshaw said that along with the isolation procedures, the centre is expected to take additional steps: enhanced cleaning; cancellation of group activities; and regularly cleaning of common-touch objects, such as salt shakers, or replacing them with items like single-use packets.

"The measures essentially try to limit the possibility that there is any contaminated surfaces that people could touch," Hinshaw said.

Seniors and those with underlying medical conditions are considered at greater risk of succumbing to COVID-19. Hinshaw said that concern is compounded in long-term care centres because they tend to be populated by seniors who have conditions requiring extra care while living in close quarters.

"Long-term care centres are one of our most vulnerable groups," she said.

A letter to residents from Revera, the operator of the McKenzie facility, said the woman who died developed symptoms on Sunday and was confirmed with COVID-19 on Monday.

"The employees of McKenzie Towne, and the entire Revera family, are devastated by this tragic news," Dr. Rhonda Collins, the chief medical officer for Revera, said in the letter.

Collins said the employee who tested positive hasn't worked at the centre since March 9 and remains at home in self-isolation.

"Residents in the affected areas of the home are isolated in their rooms. Staff are wearing full personal protective equipment to serve those areas," wrote Collins.

Hinshaw reported 57 new cases of coronavirus across Alberta on Tuesday, the highest single-day report in the province since its first case was announced March 5.

Most cases have been linked to people returning from travel abroad, although 28 cases are from community transmission.

Hinshaw said 19 people are in hospital, with seven of those in intensive care. Three people have recovered.

This report by The Canadian Press was first published March 24, 2020.

Alberta Medical Association calls health-care changes irresponsible during pandemic
Mar 31, 2020 4:32 PM
Comments
We welcome your feedback and encourage you to share your thoughts on this story. We ask that you be respectful of others and their points of view, refrain from personal attacks and stay on topic. To learn about our commenting policies and how we moderate, please read our Community Guidelines.