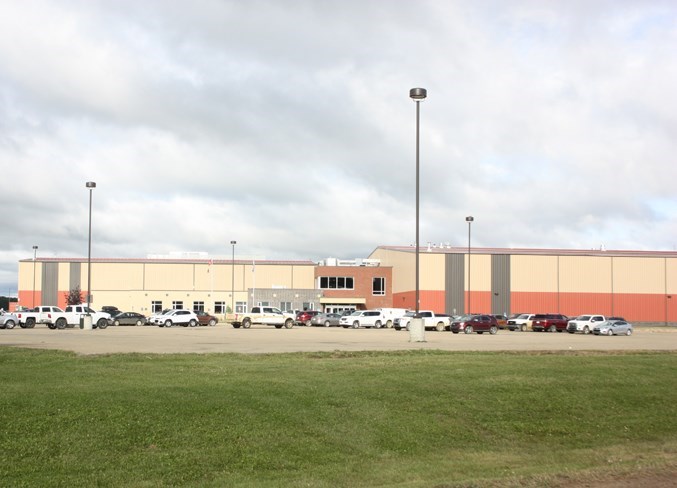 The Athabasca Regional Multiplex Society is still awaiting word is they've received a grant to install solar panels at the Multiplex facility.

ATHABASCA - The Athabasca Regional Multiplex Society is still waiting for word on whether they have secured a grant from the Investing in Canada Infrastructure Program.

The society first applied for the grant in July in order to help to secure funds to install solar panels on the roof of the Athabasca Regional Multiplex building itself.

ARMS chairperson Rob Balay said assuming they get the grant, they will likely move ahead with this project this summer.

“We were supposed to know by the end of the year, but obviously they are a little behind schedule,” Balay said. “We also applied for the Alberta Municipal Solar Program grant in September, which we were approved for. Now we are just waiting on the ICIP grant.”

He added they are not allowed to start the project until they hear about whether they are approved.

“We get disqualified from receiving the grant if we get started on the project before its approval,” Balay explained. “We also cannot access the funding from the AMSP grant until we find out if we were successful with the ICIP grant.”

He said the combined totals of the two grants put together come to about $351,000.

“A pair of motions were also passed by the town and county councils to commit $26,750 each to the project, which will take care of the entire cost of the installation of the solar panels,” Balay continued.

A motion made by Coun. Travais Johnson was passed at the Athabasca County council meeting Oct. 31 to commit the $26,750 from the 2020 budget for the solar installation provided all the grants were approved. A similar motion made by Balay at the Town of Athabasca regular council meeting Nov. 5 to approve the funding and to direct administration to enter into an agreement with Skyfire Energy for the design and installation of the solar photovoltaic array and system project.

Multiplex general manager Kelsea Brown said once the solar panels are installed, it would help to reduce the cost of power to run the building.

“That includes the pool attached to the Multiplex as well,” Brown said. “Power costs fluctuate every year so I wouldn’t be able to give an exact figure, but we will get a sizeable chunk of change that would go back into the building once we get the panels installed.”

She also added that it would be business as usual with no shutdowns when the solar panels are installed.

“It’s a great project and I hope we will be able to move forward with it,” Brown said.

Balay said assuming the project gets approved, it will likely take about six weeks to get the job done.

Collision claims Plamondon man
Aug 5, 2020 10:44 AM
Comments
We welcome your feedback and encourage you to share your thoughts. We ask that you be respectful of others and their points of view, refrain from personal attacks and stay on topic. To learn about our commenting policies and how we moderate, please read our Community Guidelines.