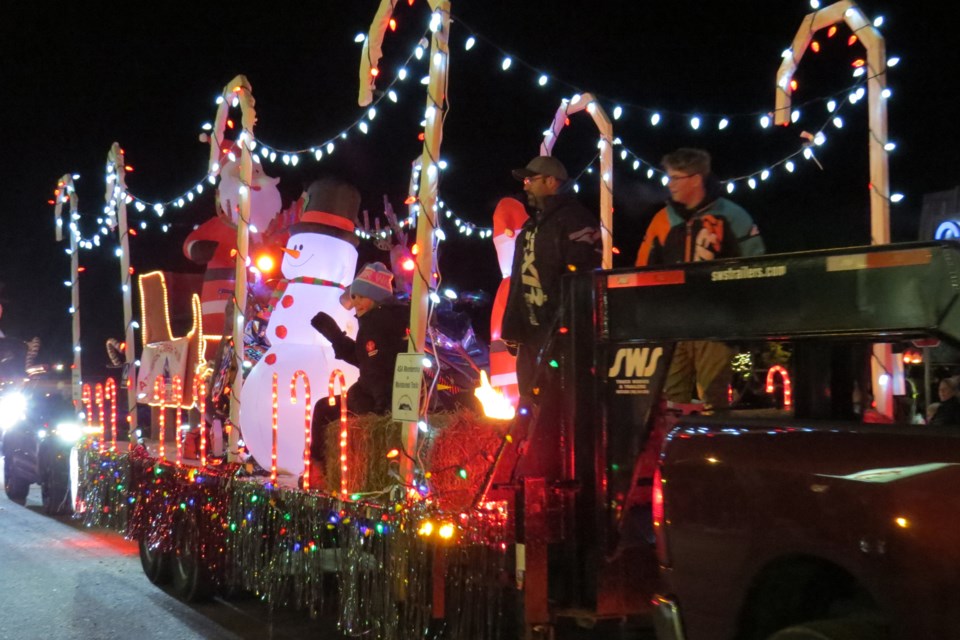 The annual event gives Athabascans a chance to watch the parade, save money, support local businesses and witness fireworks.

Chamber president Todd Dutchak said lots of walkers turned out for this year’s parade along with 34 floats.

“The parade itself becan at 6:30 p.m., and this was followed by the lighting of two trees at Riverfront Park,” Dutchak explained. “At 8:30 p.m., the evening ended with the fireworks lighting up the nighttime sky.”

Eleven-year-old Madison Strong was one of the people aboard the Athabasca Skating Club float during the parade.

“I loved to be a part of it,” Strong said. “There was so much I loved about it, it’s hard to say what my favorite part was. I would definitely take part in another parade in the future.”

Dutchak added that the Moonlight Madness sales were going really hard throughout the local business community.

“It gives people a chance to shop local, and it’s always about getting the people in the town to come out and support their merchants,” he said. “It’s always a pleasure for the chamber to organize the events of the Moonlight Madness.”

Children also got to have their pictures taken with Jolly Old St. Nick himself at the Athabasca Home Hardware.

“It was a fun night to be had by all,” Dutchak said.

“We also served free hot chocolate and fried bannock made by Noelle Callihoo and Evelyn Charlton,” executive director Laureen Houle said. “We had lots of beautifully crafted items from our vendors, and lots of foot traffic came in and out throughout the evening.”

As well, the Moonlight Madness Market was also set up in the basement at the Royal Canadian Legion.

Organizer Jenn Oba said foot traffic among it’s vendors was steady throughout the day from 11 a.m. to 9 p.m.

“It’s hit or miss as to how each of our vendors do, but overall the event goes really well,” Oba continued. “We’ve held this event for more than eight years now, and every year it’s different. While we do have a core group of vendors, we also see some new faces every year, an it gives members of the community to shop local and to socialize with each other in the process.”

Dutchak added that there was great participation among everyone involved with the annual Moonlight Madness.

“Both sides of the streets were packed with people watching throughout the parade route,” he said. “We could not have asked for a better evening.”