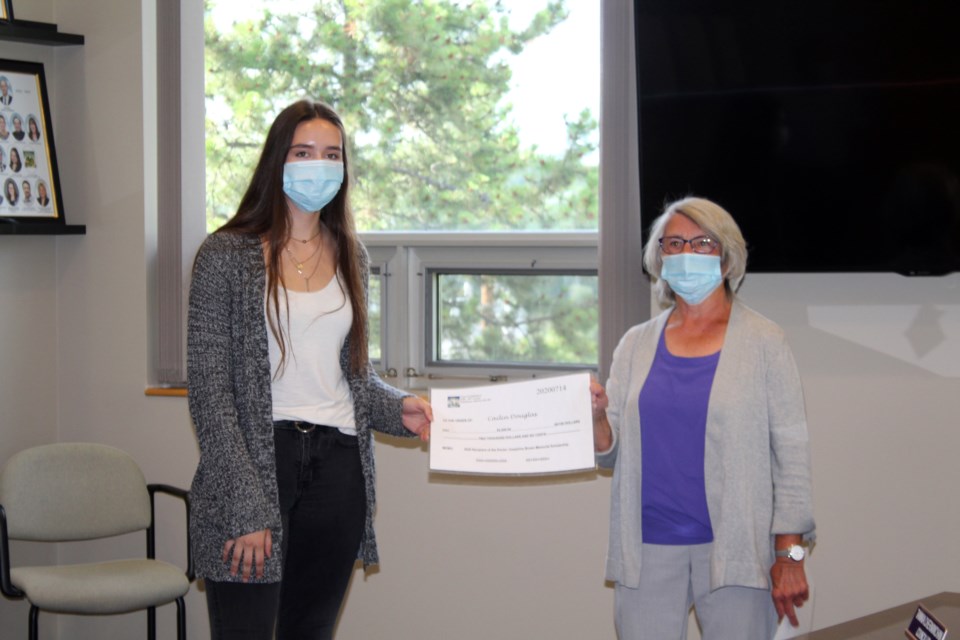 Cailin Douglas, 17, was chosen as the recipient of the Dr. Josephine Brown Memorial Scholarship. Douglas was presented with a cheque for $2,000 by Coun. Tannia Cherniwchan at the July 14 council meeting. Heather Stocking/T&C

ATHABASCA – Cailin Douglas knows she is standing on the shoulders of Dr. Josephine Brown when she was awarded a scholarship in memory of the long time Athabasca resident, physician and town councillor.

At the July 14 town council meeting Coun. Tannia Cherniwchan presented Douglas, 17, with a cheque for $2,000 which is awarded to a student who shows academic excellence and personal achievement in memory of Brown.

Brown graduated medical school at the University of Alberta in 1947 and moved to Athabasca that same year where she practiced medicine for 40 years. And in that time, she left her mark on the community.

In a history write-up posted on the Town of Athabasca webpage it speaks of Brown setting up her first office in the bar at the Grand Union Hotel, serving on the library board until 1993 and helping found the archives, the pottery club, and that she was instrumental in building the Alice B. Donahue Library and the community centre.

During Brown’s 23 years as a councillor she spent part of that time serving with former mayor Lionel Cherniwchan, who admired the popular doctor for her passion for the community.

Brown passed away in 2010 and in her will she bequeathed $300,000 with the interest to go to the library for 20 years. Once that time is up the remainder is earmarked for a new library, archives or museum or to renovate or expand the existing library, Lionel explained.

“She never married, she basically stayed true to herself and devoted her life to her patients and this community. She was a character,” Lionel said.

Douglas said she was inspired by both her grandmother and Brown's legacy and will be studying neuroscience at the University of Lethbridge in honour of them.

“For the fall, I'll be going down to the University of Lethbridge and doing a neuroscience program and I plan to do Alzheimer's research throughout the four years. That kind of falls in line with my grandma,” Douglas said.

“Although I never met Dr. Brown, her legacy is one I greatly admire and hope to someday achieve one similar to hers. I want to thank Dr. Brown and my grandma, because without either of them I wouldn’t be here today.”

County rejects another land use amendment
Aug 5, 2020 6:30 AM
Comments
We welcome your feedback and encourage you to share your thoughts. We ask that you be respectful of others and their points of view, refrain from personal attacks and stay on topic. To learn about our commenting policies and how we moderate, please read our Community Guidelines.