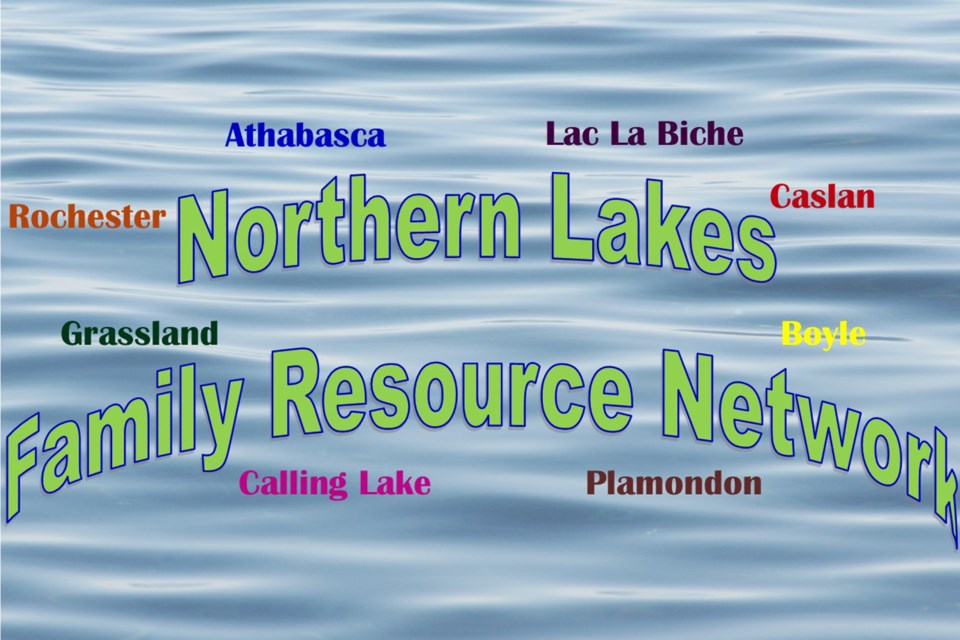 Athabasca County FCSS have been chosen at HUB for services including the family wellness program and Indigenous parenting. The spokes now create the Northern Lakes Family Resource Centre, which uses this graphic on their Facebook page. File
ATHABASCA – Athabasca County Family and Community Support Services (FCSS) has announced its inclusion as a HUB in the new Provincial Family Resource Network model the UCP government announced last year.

Barrhead and Westlock received their notifications and contracts several weeks ago, but Athabasca had to wait patiently while the COVID-19 pandemic slowed some things down with the provincial government.

“One of the delays has been, and I think this is kind of COVID-related, is that the launch was supposed to come out at the end of March; services were supposed to be available April 1. But with everything that was going on, Children's Services was a little delayed with some of the agreements, and then we’re not allowed to speak publicly until those announcements are made,” explained Debbie Wood, the manager of FCSS in Athabasca.

“We actually didn't sign our agreements right until the end of March. So, it was in effect April 1 but then we had to wait for the government news release and we were still waiting for some direction on the branding and what we need to use for advertising which is still in the works. That's why we haven't come out with anything formal yet.”

The new funding model also means a bit of a branding change. The resource network which is run by FCSS as the HUB has five spokes which make up the network and that network is called the Northern Lakes Family Resource Network. NLFRN covers programs in Athabasca, Lac La Biche, Boyle, Rochester, Calling Lake, Grassland, Plamondon, Caslan and surrounding areas.

“When the government had announced that they were going to this model, they had suggested how they would like the regions, or which communities they would like to see linked, then people put in their expressions of interest on what services they'd like to do where (and) what role they'd like to be,” Wood said. "Then when the decision was made it all kind of shifted a bit.”

“There were some changes,” Wood said. “I think the biggest impact has been everybody was used to Parent Link centers and now that no longer exists."

So, while the Athabasca Parent Link is now called the Athabasca Family Resource Centre, staffing hasn’t changed so people will still recognize the staff and in fact the new model created one more position, Wood said.

“Nadine (Wiselka-Tomuschat)'s position changed because we used to have that early childhood development program that worked with Parent Link,” Wood explained. “So that ended with the other contracts; Nadine's now moved into the HUB position. So, we lost one and gained it in another area and then with our diversion program, we had one added because we will now be serving Lac La Biche.”

Other services for FCSS are continuing like the senior's advocate and family school liaison workers, Wood noted. She added that having Lac La Biche as a spoke has expanded their area, but a silver lining to the pandemic is that it has made the staff get better at communication between providers.

“I think probably part of the benefit of what's happened to us right now working remotely is that we're getting better at being able to link electronically,” said Wood. “So even right now, there's services being done by Lac La Biche FCSS that are being advertised through us as well so people can join in by Zoom. I think we need to look going forward as to how we make sure we're meeting those gaps in the communities and being able to access all of those services.”

Wiselka-Tomuschat, the new HUB coordinator, added that through the pandemic, programming has been and will continue to take place.

"One other thing that we do have going on that's very casual is Coffee and Connection and the Family Center’s doing that by Zoom every day,” Wiselka-Tomuschat said. “That's something for parents if they just want to talk to another adult human being they can call in and that's from 9-10 a.m. every morning and 1-2 p.m. every afternoon.”

Wiselka-Tomuschat said parents need to message the FCSS site to get a link sent in an email and then they can tune in whenever it works for them. There's also an evening one Wednesdays at 8:30 p.m. she noted, if that works better when the kids are in bed.

Wiselka-Tomuschat's new role as the HUB coordinator will be to take the initial call from someone looking for services then link them to the resource, or spoke, that meets their needs.

“It is always both our role for FCSS and the HUB to be helping people access services,” Wood added. “So, if anybody has any questions, if we're not the place we will direct them to the right place.”

You can find out more information about which programs are running and when on the Athabasca Family Centre and Northern Lakes Family Resource Centre Facebook pages.