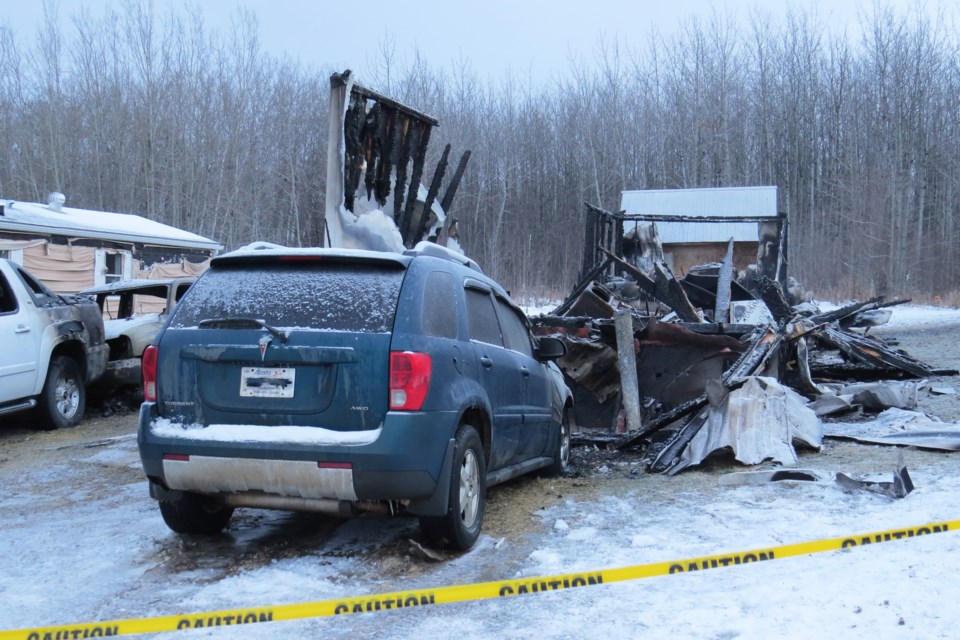 A police investigation continues following an early-morning fire Dec. 18 at a mobile home at the Aspen Grove Trailer Park in the Village of Boyle. A body found at the scene has since been taken to the Office of the Chief Medical Examiner for an autopsy. Bryan Taylor/AA
BOYLE - After human remains were found at the scene of a Wednesday-morning trailer fire in Boyle, local RCMP and the Major Crimes Unit continue to investigate.

Emergency services were called to the Aspen Grove Trailer Park Dec. 18 at 5:40 a.m., where a trailer was engulfed in flames. Fire crews from Boyle, Athabasca and Colinton responded to the scene, stated Athabasca County Regional Fire Services regional chief Steve Hamilton in a release.

A Dec. 20 RCMP press release states that the body found at the scene has since been transferred to the Office of the Chief Medical Examiner.

“We will have more information once an autopsy has been concluded,” said RCMP Media Relations Cpl. Laurel Scott

The mobile home and a truck parked at the property were destroyed in the blaze, while a Chevrolet Avalanche and a Pontiac Torrent parked at the home were damaged.

As of Dec. 20, Boyle RCMP continue to have the scene sealed from the public.

About the Author: Bryan Taylor

Bryan Taylor is a reporter with the Athabasca Advocate, joining the paper in April 2018. He covers Athabasca and Boyle municipal politics, as well as other news, community events and sports in and around the region.
Read more