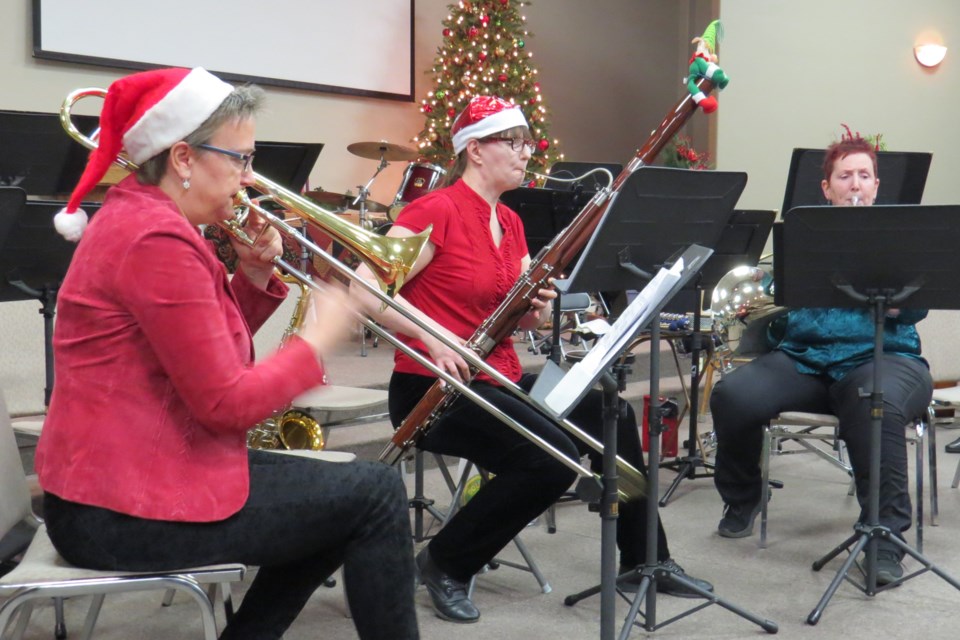 ATHABASCA - The seats were almost packed as the Athabasca Community Band put together a Merry Little Christmas Concert Dec. 9 at the Athabasca Missionary Church located on the town’s east hill.

ACB conductor Graeme Peppink said it was a long-time coming for the community.

“Reg and I had been talking about having both bands do something together as it has been such a long time since the band put something on as a concert,” Peppink said. “When some of the students performed last year, things have just ballooned this year with EPC’s three music classes. It just made sense to have something like this.”

He said in order to maximize the audience, you have to ensure it’s not just the community band that is playing.

“The high school students have families, and they came to watch the show in droves,” he continued. “The bands performed a variety of tunes, including Christmas tunes like the Hawaiian Mele Kalikimaka or the Australian Six White Boomers.”

Amanda Oldale plays the bassoon in the ACB.

“I’ve been in the band since it first began more than 10 years ago,” Oldale explained. “I’m currently the only bassoon player in all of Athabasca, and one of the very few in northern Alberta. My daughter even wore her bassoon roadie vest. She said she does everything anyway, so she might as well have the vest.”

Oldale also plays as part of a trio within the band, and has arranged songs like Six White Boomers and Leonard Cohen’s Hallelujah.

“It can take up to a month to put together, and they get tweaked as we play the songs while on stage,” she added. “It was great to see so many people at our concert. It’s great to see such a big audience at this event.”

Johnathan Giroux plays the tenor saxophone as part of the EPC band.

“It’s fun to be part of a band. It’s the first time I’ve been part of a live performance, and I really enjoyed it,” the Grade 10 student said. “I will very likely continue to take band in school next year as well.”

“I really enjoy music, and it’s a really big part of my life in three different ways,” she said. “What I mean is that besides playing the clarinet, I also sing and play piano as well. I hope to continue to play as part of a band during post-secondary, and I plan to join a choir too.”

Miller said she’s really proud of how the children performed.

“They did an awesome job on stage,” she said. “It was really nice of the community band to invite us to perform with them, and it gives the kids a chance to experience what it is like to perform in front of a crowd.”

Audience member Marilyn Kariel said watching the kids perform brought back memories of how she performed in a band back when she was in high school.

“I played the clarinet,” Kariel said. “It gave me a chance to show my fellow students that I was talented at something, and I really enjoyed seeing the present group perform. I will definitely be back to watch them again next year.”

Peppink said it was great to reintroduce the EPC band to the community after so many years.

“Let’s hope it continues to get bigger next year,” he said. “Who knows, we may even be back at the Nancy Appleby Theatre. But for this year, it’s by far the largest audience we have had during my several years with this band.”

Boyle bear bamboozles block
Oct 21, 2020 4:00 PM
Comments
We welcome your feedback and encourage you to share your thoughts. We ask that you be respectful of others and their points of view, refrain from personal attacks and stay on topic. To learn about our commenting policies and how we moderate, please read our Community Guidelines.