Annual recognition for missing and murdered Indigenous women welcomed speakers from around the country
Oct 14, 2020 4:17 PM By: Heather Stocking 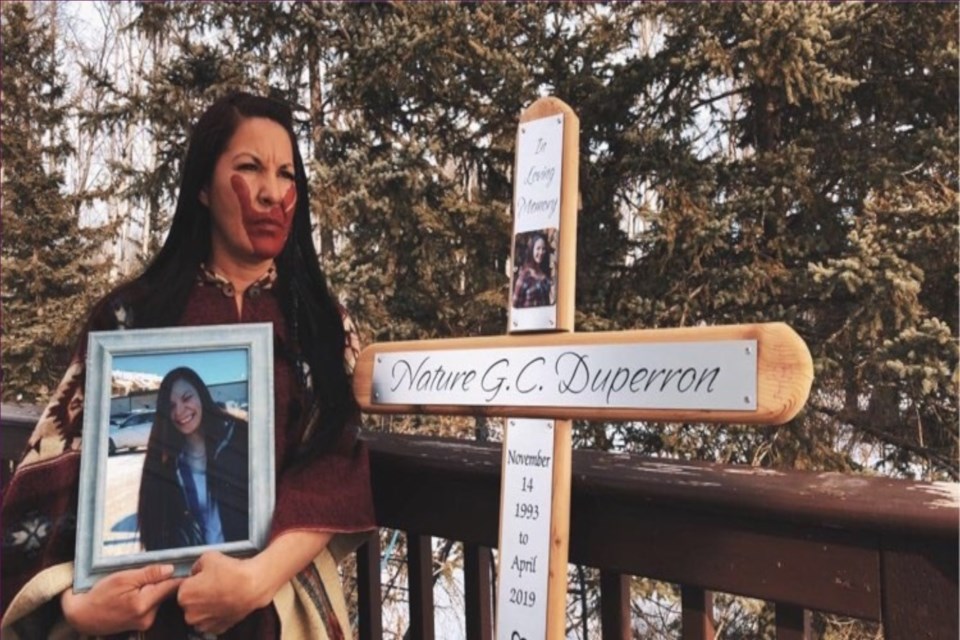 Cheryl Uchytil-Duperron told the story of her daughter Nature as part of a four-day MMIWG2S event organized by the Awo Taan Healing Lodge in Calgary that was streamed online. Submitted

ATHABASCA — Every year missing and murdered indigenous woman, girls, and two-spirit (MMIWG2S) are remembered Oct. 4 in the ongoing struggle to work toward solving the myriad of cases that haunt families across the country.

With few Sisters in Spirit walks taking place due to the pandemic this year, the Awo Taan Healing Lodge in Calgary reached out to find women to speak of the impact of losing loved ones in a four-day event that was streamed online and included the mother of Nature Duperron, Cheryl Uchytil-Duperron.

“My friend from Grande Prairie had posted on her Facebook and (Nicole Eshkakogan) was basically looking for grandmothers that are raising their grandchildren due to the missing and murdered,” Uchytil-Duperron said in an interview last week.

Eshkakogan is Anishnabek/Blackfoot and as part of her studies at the University of Alberta, she is authoring a book about the impacts on families who must raise the children of MMIWG2S, and it interested Uchytil-Duperron because she feels there is not enough awareness about those who are left behind.

“There’s not enough help available to help grandmothers that are raising their grandchildren from the ones that are murdered,” she said. “And my daughter is only one of them.”

When Nature was murdered in 2019, she left behind three children; the two oldest, 7 and 8, are with Nature’s grandmother, their great-grandmother, and the youngest, 4, is with Uchytil-Duperron.

Some of the content was pre-recorded so Uchytil-Duperron composed the music and sent it with photos in early September that were made into a three-minute video shown during her appearance on the live event.

“It was really interesting because I got to play the music. So, I did the music myself and then I sent it to (Awo Taan). Then I sent the pictures that I wanted to display. So, the picture of the dresses hanging in the tree was taken in Hinton,” she said.

Hinton is significant because that is where her daughter was eventually found and the small red dress in the photo was Nature’s, but Uchytil-Duperron chose to focus on her daughter's life and less on her death.

“I wanted a good memory of her; I had a lot of good (ones) with her,” she said. “And I wanted them to understand how important she was to me and I wanted something that her little kids could treasure.”

And even though three people have been arrested and charged with kidnapping, robbery and first-degree murder, the trial will not take place until at least March 2022 and Uchytil-Duperron still does not know why they chose to murder Nature.

“I don't really have all the answers as to what has happened with my daughter because they have no trial days or preliminary yet.”

She may never get answers, but for now she is opening up about her daughter’s death, both giving and finding comfort in talking to others going through the same thing she is.

“I do appreciate that time where I do get to reflect and think about her and talk about her because I find that it's quite healing because I've shut down for quite a while. It just shut me down in so many different ways,” she said. “But it was so nice to be in the presence of other women that have gone through this … and so, it was so nice to be able to be with other ladies that have gone through this already and they're so encouraging. I really love that.”

Toboggan run proposed for Athabasca
Oct 27, 2020 1:10 PM
Comments
We welcome your feedback and encourage you to share your thoughts. We ask that you be respectful of others and their points of view, refrain from personal attacks and stay on topic. To learn about our commenting policies and how we moderate, please read our Community Guidelines.