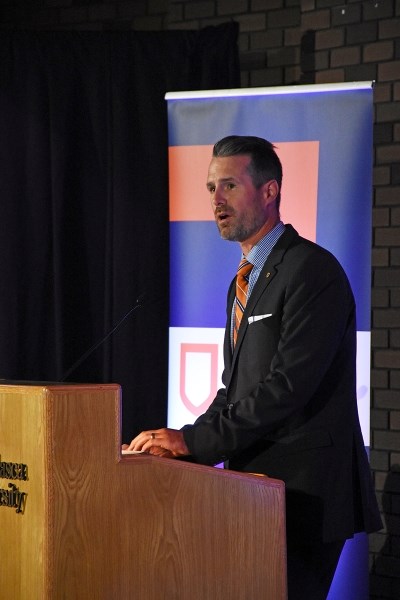 Fassina has a background in human resources and organizational psychology, as well as business experience at several post-secondary institutions.

A crowd of 100 people packed the governing council chambers in Athabasca for the announcement. He will be the eighth president of the institution.

“Regardless of what question, what challenge or what decision we undertake to strengthen our academic mission, I am reliably committed to connect back to the values of honesty and integrity, to embracing pluralism with mutual respect and mutual accountability, to finding innovative ways to create openness, transparency, and a culture of communication in indentifying ways to create connection and a sense of community throughout our geographically diverse university and all of its stakeholders,” Fassina said on Aug. 17.

Marg Mrazek, board of governors interim chair, said Fassina’s application was one of 43 submitted to the presidential search committee, launched earlier this year under the eye of Vancouver-based headhunter, The Geldart Group. The committee received 20 Canadian and 23 international applications.

Before his new appointment, Fassina has acted as provost and vice-president academic at the Northern Alberta Institute of Technology (NAIT) since 2013, which followed his time as NAIT’s dean of the J.R. Shaw School of Business and School of Hospitality and Culinary Arts.

“There are characteristics of what Athabasca University is facing that I have dealt with before,” he said. “Whether it be around transformational change – and I do have some experience having gone through that – but being able to pull multiple levers in order to create that sustainability and knowing that some decisions are not always easy. We will make those decision collectively and look to create those changes that we can all embrace together.”

“Arguably, when I started this process, I knew very much what the entire public knew and what was out there,” he continued. “I’ve mentioned it to some other individuals that there’s nothing insurmountable. There’s challenges, yes. We know that the opportunities before us far outweigh the challenges. We know the strengths of this university far outweigh its faults.”

The university has struggled financially over the last several years and is expected to reach insolvency by October 2017 if it continues to rack up a deficit over the next three years. At the same time, university morale has suffered with layoffs and hiring freezes, and the perception that the interim president was not part of the Athabasca community.

Fassina said that he looked forward to joining the community, although he would be commuting to town from his home in Sturgeon County.

“Like many Albertans, I will end up making the commute to Athabasca, along with the Edmonton and Calgary campuses as well. But again, knowing that joining the Athabasca family, I’m hoping that my family is welcome there as well and we look forward to becoming part of the community, regardless of where we live.”

Advanced Education Minister Marlin Schmidt said the appointment of Fassina will bring certainty to Athabasca University’s situation, at least in the meantime.

A third party review will be assessing the university, although Schmidt said he has not firmed up a timeline, nor confirmed if it will be carried out by an individual or committee.

“It’s been a long time that we’ve had an interim president in place,” he noted. “That uncertainty wasn’t something that anybody appreciated. Having Dr. Fassina in place in a permanent position definitely gives us a starting point to establish a new relationship with Athabasca.

“It’s no secret that there’s a lack of trust and perhaps unwillingness for parties to work together, so it’s my hope that the third party will be seen as a neutral facilitator of the process, somebody who doesn’t have a stake in what’s going on at Athabasca University, a trusted mediator I guess,” Schmidt said.

He added that while the provincial government has been more directive in the past than it has been with other universities, he appreciated the institution’s willingness to work together.

Bringing businesses together to survive the global economy
Mar 31, 2020 10:45 AM