Roles, titles and supports were streamlined by student services in a recent overhaul
0
Mar 11, 2020 3:11 PM By: Heather Stocking 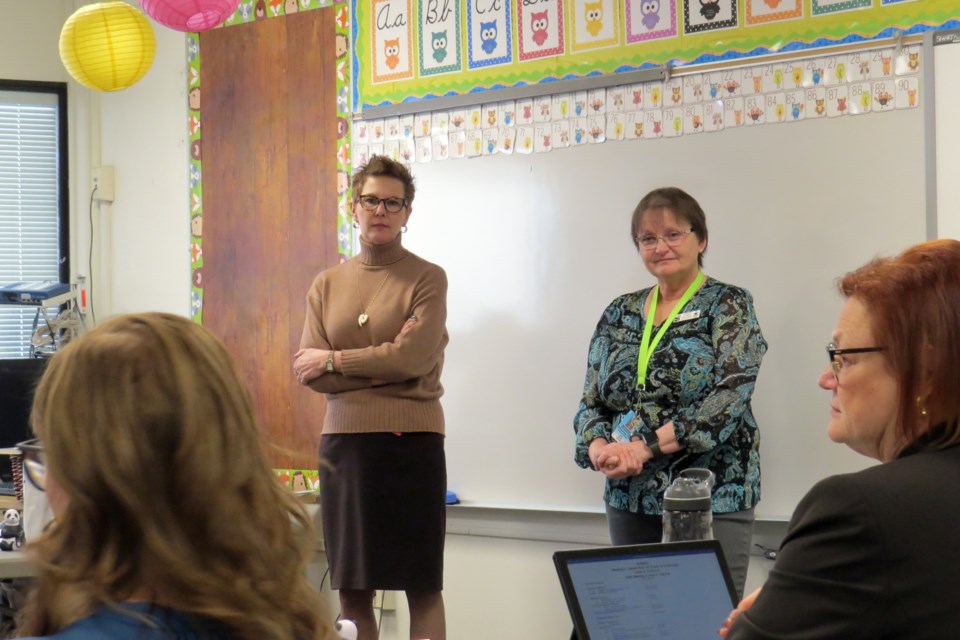 Smith spoke to the trustees about the broader changes to student services including consistent terminology for roles, defining which stakeholder provides services and using technology to fill in some gaps when distance can disrupt things like speech pathology services.

The pyramid of interventions is based on the idea that the broadest part of the service pyramid is the universal supports. These are the supports that the frontline staff in the schools — teachers, educational assistants and leadership teams — use to build a culture in the school that builds resiliency in children.

“When we talk about targeted groups you're talking about where we have working groups like GLOW Girls or boys' groups or groups for grief or groups for trauma, or we may have groups of kiddos that are faith based, like over at EPC at the Soul Food Cafe, things like that,” explained Smith.

Using the pyramid of intervention, supports are divided into three categories: universal, targeted and specialized. One way to support students is to have a strong relationship with families; this is a universal support. A specialized support would be a program like speech pathology.

“It’s important to us to make and maintain contact with those families so we know what we can do with their children,” Saunders said. “That’s so we know we can understand the needs their children have just in case we haven’t picked up on that.”

The service providers of the supports are Aspen View, FCSS and Alberta Health Services who work closely together, but there was some overlap of services prompting the student services department to identify and streamline services.

“Therapy, which should be the purview of Alberta Health and the medical profession, was kind of creeping into the expectations of what was going on in schools,” Smith said. “We've changed the language now to school counselors and student service consultants because we want to make it really clear that our role in education is not to provide therapy.”

Kravontka and Saunders presented the trustees with a report on the practical side of how they are addressing the complexity of classrooms by using the pyramid of intervention offering supports to students who need assistance.

Kravontka remarked that WHPS is on the front lines and have already witnessed a change in students' ability to remain regulated while learning using the zones of regulation.

“If students are ready to learn they are in the green zone. If they are sad, or feeling alone, they may be in the blue zone. When someone is angry or upset, he or she may be in the yellow or red zone,” she explained. “If a student is in these zones, he or she cannot learn so our job is to find out what strategy will help them to get back into the green to learn.”

She added that each classroom has items such as sound reducing headphones and breathing balls.

“We also have wiggle chairs in some of our classrooms, including in the Grade 3 class that I teach,” Saunders said. “All this is to give the kids the support that they need throughout the day.”

“At the very top is supposed to be that five per cent of intervention; those kids that have the most complex needs that need the most time and attention. But I would say to you as somebody who's done this for 35 years now, it is like a mountain range, and that any child can be in that five per cent,” she explained. “We're all just one crisis away from needing that intervention.”

Although every crisis comes to school, Aspen View is focusing on the educational needs of the children, and the things that are contributing to the success or lack of success in the school.

“We cannot own the entire environment and we cannot own family circumstances; we can try and provide support for that child as much support as possible,” Smith stated. “And it's our responsibility to make the referrals to the people in the community who do have the resources and the responsibility of taking care of that.”

By the time a teacher reports to a school counselor that they're concerned about a student, they usually have already had a conversation with the Inclusivity Lead and probably one or two of the administrators Smith told the trustees. The school counselor can then they decide where in the pyramid of intervention the child should fall.

Smith explained Aspen View can meet more needs by putting some boundaries around how many visits a child can have before their needs are reevaluated so they can be moved up or down in the pyramid as their requirements change.

“If a councillor is reviewing a student and they reach that six to eight visits and they go, ‘Know what, this kiddo is doing okay, they can go back down to see the (Family Support Liaison) for a few sessions,’” Smith said.

Included in establishing distinct roles between the service providers and setting reevaluation guidelines, Aspen View has also defined the roles of the staff. For example, if a councillor from EPC has to travel to the Boyle school to offer support they become a student services consultant. It is a subtlety of language to ensure every role is clearly defined.

“Every one of our 10 schools have a counselor assigned to them but if they need to call in somebody else's counselor because of a crisis, when that councillor comes in they come in as a student services consultant,” Smith explained.

She also informed the trustees about a service called TinyEye, an online speech and occupational therapy tool designed for schools. As part of the specialized supports in the pyramid it can be challenging for rural schools to access a speech and language pathologist (SLP).

Both due to fewer pathologists entering the workforce and distance as they work out of urban areas, TinyEye is a cost-effective way to ensure students don’t lost a day of SLP service.

“The beauty of it for areas like Smith are that we don't lose a day of SLP service because of highways not being passable and people from the city not being able to make the trip, which I can understand. But it means that we lose service time with our kids,” Smith said. “The other part of that we don't pay is mileage.”

Northern Lights Library System forced into financial crunch due to Library Act
May 30, 2020 6:30 AM
Comments
We welcome your feedback and encourage you to share your thoughts. We ask that you be respectful of others and their points of view, refrain from personal attacks and stay on topic. To learn about our commenting policies and how we moderate, please read our Community Guidelines.