Family gathered to place memorial near site of accident on his 18th birthday
Sep 18, 2020 1:12 PM By: Heather Stocking 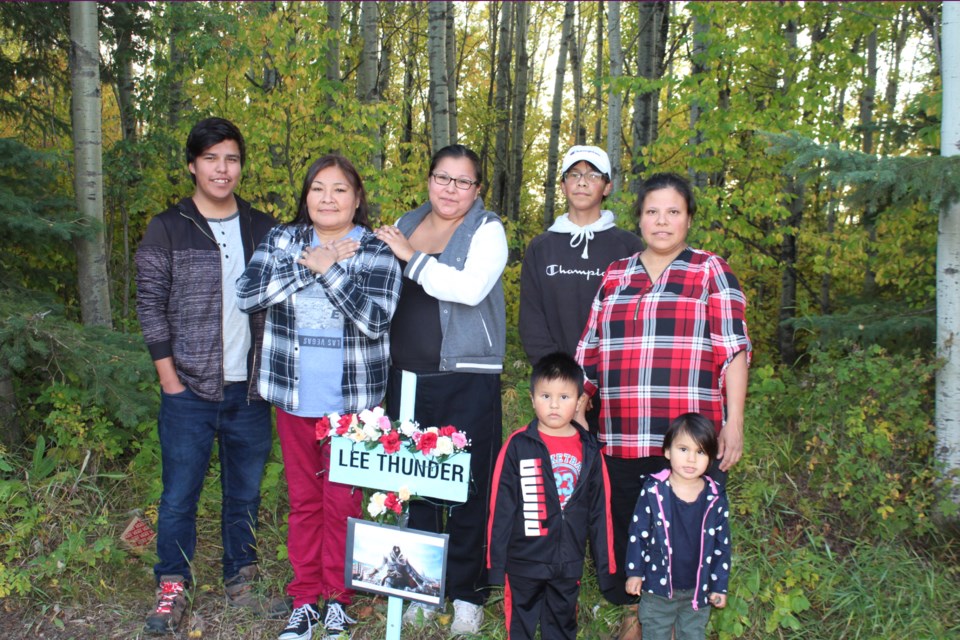 On what would have been his 18th birthday family gathered to place a small cross along the walking trail on the East Hill to remember the young man who was struck and killed in a hit and run accident in March 2015. Back: (L-R): Dallas Thunder (cousin), Shirley Thunder (mother), Emmy Thunder (sister), Malachi Noskiye (cousin), Wendy Thunder (aunt) Front: (L-R): Chance Thunder (cousin), Georgia Thunder (cousin) Heather Stocking/AA

ATHABASCA — It has been over five years since 12-year-old Lee Thunder was struck and killed in a March 2015 hit-and-run accident while walking up Athabasca's east hill on Highway 55, and for family the pain will never go away.

They gathered on what would have been his 18th birthday, Sept. 17, near the site of the accident, on the Rotary Trail, to remember him and to place a small cross made by family friend Hillary Patterson that was adorned with flowers, lights and a picture from his favourite video game, Assassin’s Creed.

“I drive by there minimum two times a day, and I'd like to see something in memory because I always remember him and I don't want him to be forgotten by others,” Patterson said.

Thunder was walking on the side of the highway with his older cousin that night at about 8 p.m., when he was struck, but the driver continued on, turning herself in three hours later. Thunder died in hospital a short time later.

In court, the 36-year-old said she thought she had hit a deer and continued up the hill, only to later hear about the death of the boy, and turned herself in to police. She pleaded guilty to dangerous driving causing death and failing to remain at the scene of an accident and was fined $2,300 and her licence was suspended for 60 days.

Patterson said she is also trying to figure out how to get a headstone for Thunder’s grave as the family has not been able to place one.

For Thunder's mother, Shirley, it has been a hard five years since the death of her youngest child, and staying in Athabasca turned out to be too much of a heartache for her.

“We moved away a while ago,” she said. “Too many memories; it was too hard to be here.”