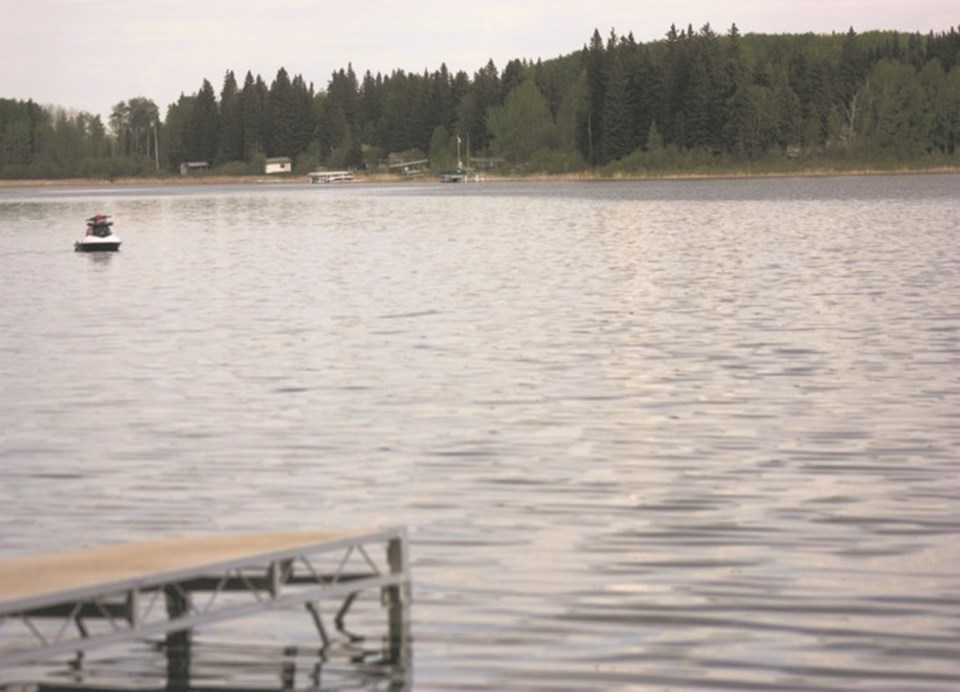 The Skeleton Lake Stewardship Association has started the public consultation phase of their application to move water out of the Krazy Creek basin into the Skeleton Lake basin to help reverse two decades of low water levels that are affecting the health of the lake. AA File

BOYLE - The Skeleton Lake Stewardship Association has advanced in its application to move water from the Krazy Creek basin into the Skeleton Lake basin by entering the public consultation phase of the process.

The peak water level in Skeleton Lake came in 1997 and has been declining ever since, causing water quality and fishing concerns which prompted the request to the provincial government, says SLSA president Brian Curial.

“We have to do First Nations consultation (and) the government gave us a list of landowners that Krazy Creek goes through; we have to go and talk to each of those as well (but) 30 or so we’ve (already) spoken to,” Curial said. “We’ve got information on our website and we try and communicate through Facebook and through e-mail.”

A July 27 storm did help with water levels, but not enough to open the narrows or the west areas for fisheries to be able to start again. The water is too low on the west end of the lake to support weeds that minnows need to hide in.

“That was like a one in 100-year storm and the lake went up for the first time in a long time by 13 inches and then, as what happens most falls, it’s now declined a bit more; we’ve lost three or four of those inches,” Curial stated.

“We’d like to see the narrows opened up again and the fisheries where the spawning is to be at the west end of the lake underwater again so the fish can spawn there and then we’re back to where we want to be.”

Skeleton Lake can now be considered two lakes, with a north basin and a south basin. The area in between has dried up leaving the north end unable to get enough oxygen, something Curial said he heard anecdotally of happening in the 1930s.

“The south basin (of Skeleton Lake is) much larger and gets wave action and the wave actions causes oxygen,” Curial explained. “The north basin doesn’t get oxygenated because it’s surrounded by hills and it’s very small surface area.”

Skeleton Lake has a 4:1 watershed meaning there is four times as much land as water which means less runoff sediment and a cleaner lake, but less water to keep it at the level it needs to remain sustainable.

Curial adds it is not very common in Alberta to do a basin transfer, but it has been approved before for the Village of Boyle and is usually done for municipalities; Calgary has also done inter-basin transfers to keep up with water demand.

“Boyle had a license to take water out of Skeleton Lake for many years and so we’re saying it’ll be around the same volume of water as what Boyle used to take,” Curial said. “That’s part of our justification, that Boyle in the Athabasca region was taking water from Skeleton Lake and the basin.”

SLSA is also disputing that Skeleton Lake and Krazy Creek are in different basins; using Light Detection and Ranging (LIDAR) the Association has been able to get a clear picture of what is hidden under the tree canopy and underbrush.

“We had our experts fly the area in a helicopter and get LIDAR … and determine where the earth is. They’ve determined that the watershed boundary is much closer to Krazy Creek; it actually touches Krazy Creek in several places.”

Even with LIDAR evidence the provincial government will not recognize the data and refuses to move the watershed boundary forcing the association to continue with the inter-basin transfer process.

“What we’re asking for as an inter-basin transfer is a very small amount of water, a very minor incursion into the other river basin,” Curial explained. “We’re looking to take the overflow from Krazy Creek, and we think it’ll be about 1.5 per cent of the water that flows through Krazy Creek.”

SLSA has commissioned dozens of studies over the past 15 years and that has turned into the 80-page application, which includes the statement that there will be no negative impacts downstream in the Athabasca River basin.

“There’s lots of checks and balances in the whole process to make sure there is no negative impact,” Curial said. “That was part of the analysis that our biologists had to do when they determine there is nothing in Krazy Creek that isn’t already in this area and it makes sense because the water has been overflowing the banks of Krazy Creek for as long as the creek has been there and has flowed to Skeleton Lake.”

The application is being reviewed by Alberta Environment and Parks and if their biologists have any questions, they can make SLSA do more research.

“We anticipate there will be some of that back and forth and hopefully, we’ve got an answer from the department by spring,” Curial commented. “Then it’s presented to the government for approval.”

Curial added if anyone has concerns or questions the group is happy to be reached by e-mail at info@skeletonlakeab.com.

Large wakes on shallow lakes
May 31, 2020 11:12 AM
Comments
We welcome your feedback and encourage you to share your thoughts. We ask that you be respectful of others and their points of view, refrain from personal attacks and stay on topic. To learn about our commenting policies and how we moderate, please read our Community Guidelines.