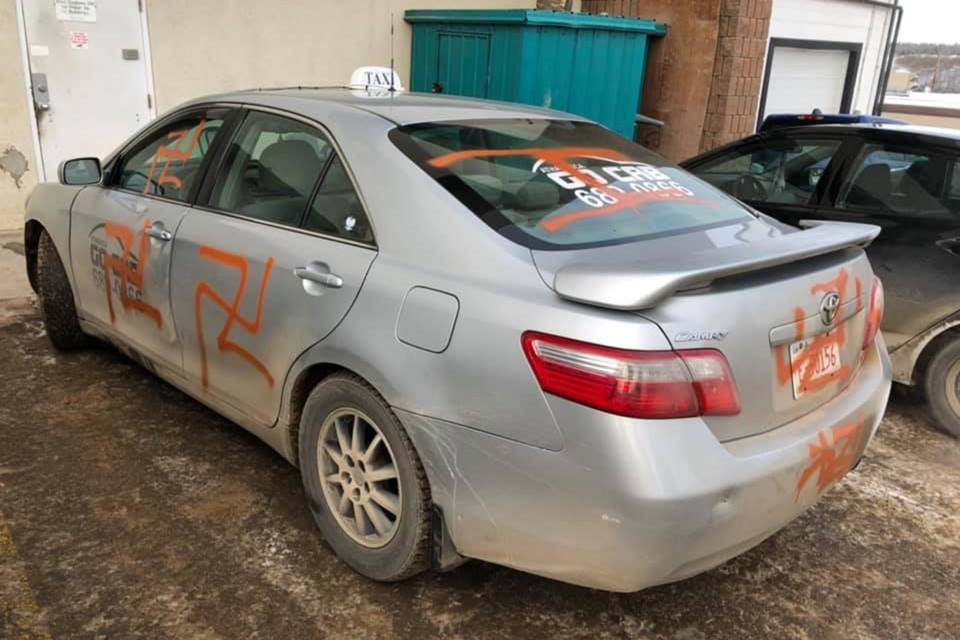 Athabasca Go Cab was targeted by vandals overnight Jan. 7 as swastikas were painted on the company's cab. Company owner Ryan Hamzeh is offering a reward for any information to help solve the case. Photo courtesy Ryan Hamzeh

ATHABASCA - The owner of Athabasca Go Cab is offering a reward to help catch the person responsible for spray painting swastikas on his cab.

“It's really sad as this is the wrong image to be shown of this town,” said Athabasca Go Cab owner Ryan Hamzeh following the Jan. 7 incident. “This town is so beautiful and the people are so great.”

Hamzeh said this is not the first time his cab has been targeted by vandals, but despite the incidents he and his family have nothing but love for the community.

“A while ago somebody loosened the lug nuts all around the cab, and it was a good thing I was driving because I was able to notice it when I parked the car. But this incident is more personal and specific," he said.

“(But) One individual act does not describe the community."

“It was a deplorable act and does not represent the vast majority of Athabascans,” she said.

Hamzeh has filed a report with the Athabasca RCMP who have started an investigation.

“We do not have any suspects as of yet,” Athabasca RCMP Cpl. Dale Bereza said. “Our investigation is very preliminary as of right now, but we are going to see if we can get some video, or anything like that which may be in the area.

“Whether it be spray paint, or whatever the case may be, to put that type of stuff on there is never a good thing."

For his part, Hamzeh said they want to continue to provide the same good service for the community that they have since 2015. He did not characterize this latest incident as a hate crime.

“I have no idea as to the point of the vandalism. Is it a message, was it some kids who did this, was it somebody with a personal grudge? There are so many ideas that come to mind,” he said.

Collision claims Plamondon man
Aug 5, 2020 10:44 AM
Comments
We welcome your feedback and encourage you to share your thoughts. We ask that you be respectful of others and their points of view, refrain from personal attacks and stay on topic. To learn about our commenting policies and how we moderate, please read our Community Guidelines.