The art of putting water to fire 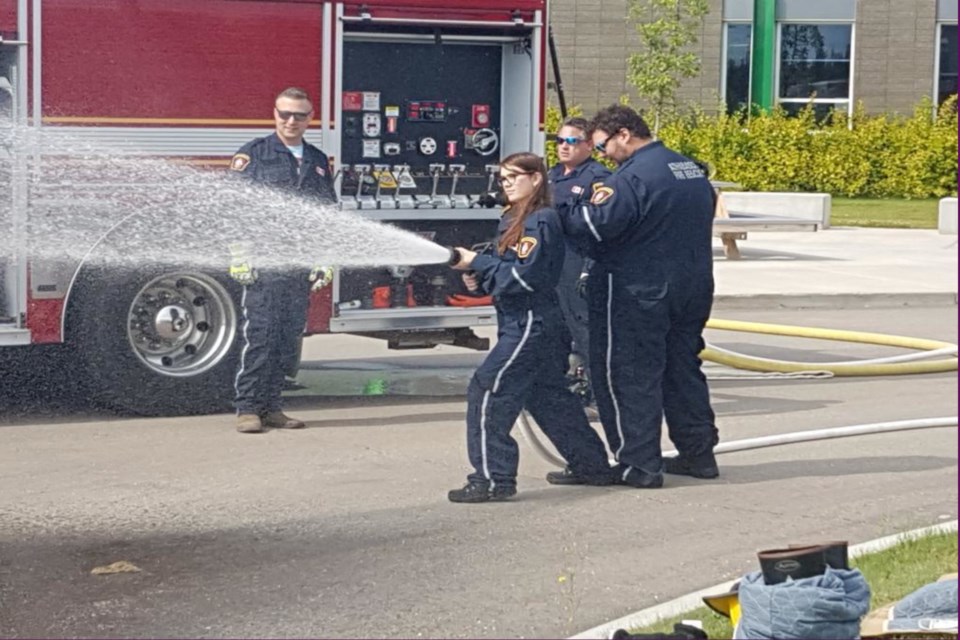 Town of Athabasca junior firefighter Malena Martel, 17, gets some training on the water hose. Once she turns 18 she will be able to attend calls. (L-R): Jason Sturrock, Malena Martel, John Martel and Kyle McDonald. Supplied

ATHABASCA – When Malena Martel was five years old, she was watching a children’s show called ‘Fireman Sam’ at her grandmother's house and decided right then and there that she wanted to be a firefighter.

There's a good chance the Grade 12 student would have chosen the same path anyway because her father John has also been a volunteer firefighter with the Town of Athabasca Fire Department for the last six years, arriving with an abundance of experience after working with Imperial Oil and Syncrude's firefighting crews.

“I think he's pretty bad-ass, honestly; I'm pretty proud of my dad. It's really neat seeing him on the end of the hose — it's like, that's my dad,” Martel said.

Like Martel, a lot of new firefighters can often pinpoint the moment in their past when they realized fighting fires was something they were prepared to do to help their neighbours and fellow residents of the community. It takes a lot of dedication and sacrifice to get trained to the point where one can enter a burning building.

Because she is only 17, she is currently unable to attend actual calls, but has been able to take part in all the training, so she will be prepared when she does get her first call. For the past 18 months, Martel has worked as a custodian at the fire hall and signed on as a junior firefighter in January. Once she turns 18, in just under a year, she can become a full-fledged firefighter alongside her father, as long as she keeps up her training.

“I've been able to go to vehicle extrication courses, live fire training, all those other courses (and) we meet up every single Tuesday and train,” she said. “I like the fact that all of us can get together as a group and learn together. Not everyone has the guts to be a firefighter (they want) someone else to do it, obviously, but it makes you feel good about yourself that you can do something for someone in need.”

It's that willingness to help, both their fellow firefighters and the people in their communities, that draws many new recruits to the ranks, and fire chiefs are happy to have them, as maintaining recruitment numbers can be a challenge.

At the Boyle Fire Department, which is partnered with Athabasca County Emergency Services, 16-year-old Andrew Doman has already been a junior firefighter for two years.

"I just wanted to volunteer and help out the community, and it looks good on a college application too," he said, noting he would like to get into nursing or teaching as a future career, but firefighting is now something he can always fall back on as well.

"I love helping the community and it's just like a big family here ... I didn't have any experience, you train as you go along and everybody is awesome here."

That mentorship of new recruits is an integral part of any department's success, says Athabasca County regional fire chief Sheldon Schoepp, who oversees the county's seven departments as well as the two partnerships that have been formed with the Athabasca and Boyle fire departments. The opportunity to observe how experienced firefighters approach the job and how they put the tactics they've learned over the years into action can be invaluable for recruits from Day 1.

"We start with the basic, basic training — PPE — you've got to know your PPE (personal protective equipment). You've got to know your pants, your jacket, your balaclavas and what is most important to have on, in the correct way. It's all about safety, that's No.1 and then we build on top of that," said Schoepp. "Most of the recruits are not going to be going inside a burning house right away, you just won't be. You have to get familiar with your SCBA, your equipment and even to how to pull a line off the truck to flow water ... It's basic, basic training — PPE, SCBA (self-contained breathing apparatus), and drill, drill, drill that into their muscle memory."

Dustin Yurdiga has only been with the Grassland Fire Department for a month — he's a fresh recruit, but he's certainly not green. He's a little older and came to the department with some experience, having already trained as a paramedic. He also worked as a correctional officer at the Edmonton Remand Centre and was a part of that facility's firefighting crew and responded to a few emergency scenarios while he was there.

Yurdiga grew up in the area, and recently returned to lay down some permanent roots. As a paramedic, volunteering as a firefighter seemed like a good fit.

"We decided to stick it out here and set down some roots. I noticed that Grassland had their recruiting set up, and I know a lot of medical people who are volunteers, so I thought I would reach out and try to join the department," he said.

What really struck him in the past month is the level of technology that has been introduced to the profession. Tactics and equipment change over time and as technology progresses, little things begin to change. One instance of this is the communications technology involved nowadays. It used to be a firefighter would carry around their radio all day and night. The blaring squelch would summon them to the fire hall to the next emergency, whether they are busy at work, on the road, or tucked into bed for the night.

The noise is still unavoidable, but now it comes through their cell phone.

"Now it's all app-based, the responding app was something I noticed, it was very cool to me and very different. It's all on your phone," said Yurdiga. "It still has its tone, but that was pretty cool to notice how technology has been integrated and changed our response. When I was in high school, I had teachers who were volunteer firefighters and they would always have that big radio on their hip."

For Martel, she enjoys the fact that she is not the only female in the department who likes getting her hands dirty.

“Honestly, it does not matter if you're a woman or you're a male; there's always at least one or two females on every department because what I've seen when we went training, there was actually a department that was all women," she said. “Honestly, you can do it, but you're going to get your hands dirty."

It is definitely a lifestyle change for a lot of people, and it's not for everyone, but there are so many ways to contribute, and anyone can apply. If you want to help, but rushing into a burning building is not your thing, Martel says Athabasca fire chief Travis Shalapay still makes room because there are many jobs to be done.

“Some people get claustrophobic, they can't even put on the SCBA or go inside live fire, but that doesn't mean we can’t use you," she said. "If you're not comfortable with something, it doesn't mean you can't be a firefighter, it just means we'll give you a different job. Those are actually my chief's words ... He's very encouraging. Honestly, there's been times where I'm like, ‘Oh, my gosh, I can't do this, I can't be a firefighter.’ And he's like, ‘Yes, you can, come on, do this.'"

She also credits chief Shalapay for increasing recruitment in the department and hopes she will have the opportunity to learn a lot more from him.

“He's a very, very good chief. I'm very glad he is our chief and I hope he remains to be our chief for a long time,” said Martel.

If you're interested in becoming part of your local fire department, more information and applications can be found on each municipality's website, and most also have a social media presence as well.