The little group that could 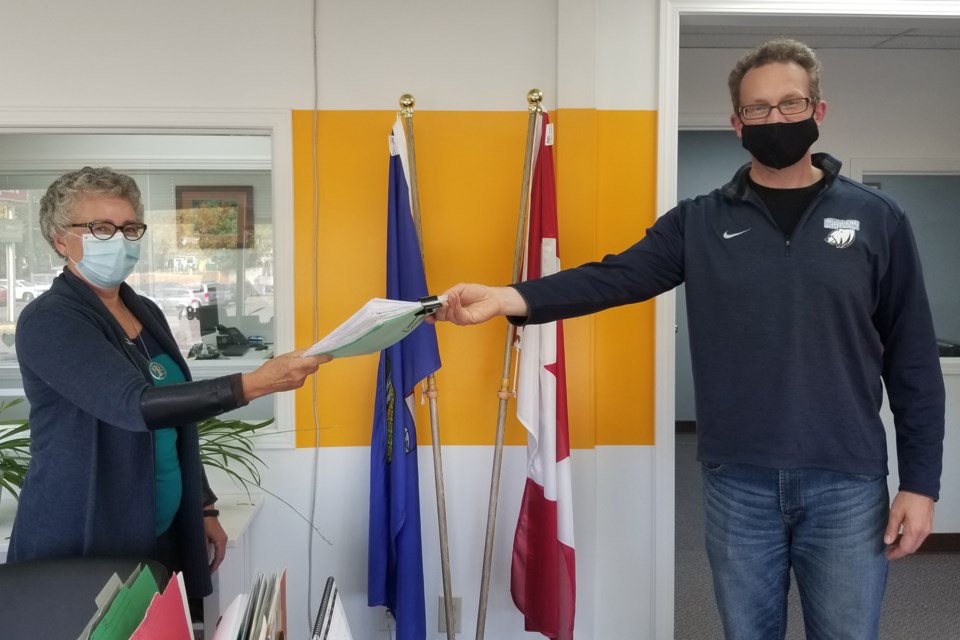 Coordinator of the Save Chain Lakes group Cecile Fausak presented shadow minister for Environment and Parks MLA Marlin Schmidt with a petition 1,700 signatures long at his office for Schmidt to table at the next session scheduled to start October 26. Submitted

ATHABASCA — Less than a dozen people in the Athabasca area have now collected 1,700 signatures to let the Alberta government know they are against the proposed closure of 164 public campgrounds and recreation areas that were announced in March.

Specifically, the Save Chain Lakes North Action Group has focused on three regional areas — Chain Lakes, Lawrence Lake and Fawcett Lake — and since striking the group July 15 they have gone to the three areas and set up at the Athabasca Farmers’ Market to inform residents and tourists of the closures, and it has been quite an empowering experience, says group coordinator group Cecile Fausak.

“Exercising my democratic responsibilities has been a humbling and empowering learning experience. This involved drafting a petition to the Legislative Assembly of Alberta to save one third of Alberta’s parks from closure, privatization, and delisting as protected spaces (and) working all summer with a passionate group of citizens to collect over 1,700 signatures,” she said.

She added that one of the reasons it is important to keep these areas open was in response to the pandemic.

"I love nature and would not survive COVID restrictions without access to parks,” said Fausak. “I am grateful to all the people who so readily joined me in signing this petition, and those who spent hours explaining what was happening to our provincial parks and gathering signatures.”

On Sept. 15, Minister of Environment and Parks Jason Nixon said that no parks are closing and it was misleading to say they were as the areas will be operated by the department of Land Management, but that does not make the Save Chain Lakes group feel better.

“Removing services such as fire pits, picnic tables, garbage cans, washrooms et cetera and transferring the site to the Public Lands Division makes the site unavailable to campers and day users, and it is no longer protected from leasing, industrial use, willful unauthorized access et cetera,” Fausak said.

The group has also scheduled a meeting with Athabasca-Barrhead-Westlock MLA Glenn van Dijken for Oct. 16, and are waiting to hear from Lesser Slave Lake MLA Pat Rehn to present the petition to them as well. Fausak noted thousands more Albertans have signed online petitions from other concerned groups.

“My nine-year-old granddaughter asked me ‘Granny, did you get enough signatures?’ What would be enough for this government to halt the implementation of the Optimizing Alberta Parks Plan? Will they respond to the outrage of 1,700 Albertans and many more who have signed online petitions,” she said.