Barrhead Remembrance Day ceremony to be scaled down

Due to COVID restrictions, Barrhead’s Remembrance Day ceremony will be limited to a small outdoor event at the cenotaph
Oct 13, 2020 2:30 PM By: Barry Kerton 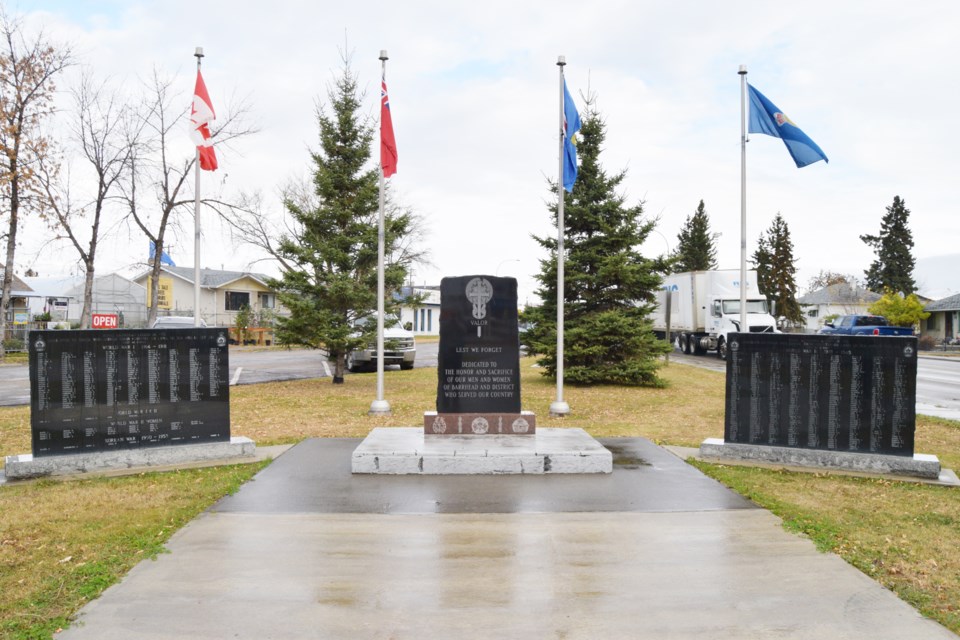 The Town of Barrhead will have a small Remembrance Day ceremony at the cenotaph in Memorial Park on Nov. 11. The service was greatly reduced due to coronavirus concerns. Barry Kerton/BL

BARRHEAD-There will be a Remembrance Day ceremony in Barrhead.

What form it will take is still to be decided, but what is known, it will look vastly different and be a much smaller affair than that of past years.

Royal Canadian Legion president John Tiemstra said during the organization's Oct. 6 annual general meeting that due to concerns over the coronavirus Dominion Command has given them a strict set of guidelines to adhere to when planning Remembrance Day ceremonies.

The result is that there will be a very small service at the cenotaph in Memorial Park with no parades and direct participation of military units or the cadets.

Tiemstra said that the laying of wreaths wouldn't be part of the ceremony but could be done before or after the proceedings.

"Participants must also adhere to physical distancing requirements and masks should be worn," he said.

Spectators will be allowed, however, Tiemstra said due to the limited space in Memorial Park, and physical distancing requirements, attendance will be limited.

"That is how it stands now. It could change if the situation gets worse, they could clamp us down to nothing," he said.

Canadian army and airforce veteran Herman Barkemeyer, who served with the Princess Patricia's Canadian Light Infantry in the Korean War, added they are not the only community whose Remembrance Day ceremony will be impacted.

"It is everyone," he said. "I just heard on TV that people are being asked to stay away from the national ceremony in Ottawa and other places because of the need for physical distancing."

After the ceremony, the Legion will be open to members only.

The Barrhead Legion will be starting their poppy campaign on Oct. 30 through participating businesses. Due to COVID, cadets will not be participating in the campaign.

Remembrance Day wreaths are also available, but Tiemstra said due to the pandemic sales will be restricted through the Legion office only, adding in past years, Legion members have gone door-to-door selling wreaths.

"But because many of our members are older, we are in the demographic which is most adversely affected by the virus," he said.

Wreaths will be available starting this week at the Legion for pickup Monday, Wednesday and Thursday from 8:30 a.m. to 4 p.m.

Hillcrest Lodge resident test positive for COVID-19
Oct 26, 2020 6:45 PM
Comments
We welcome your feedback and encourage you to share your thoughts. We ask that you be respectful of others and their points of view, refrain from personal attacks and stay on topic. To learn about our commenting policies and how we moderate, please read our Community Guidelines.