Tresa Brodersen has been visiting homes of other Barrhead residents celebrating birthdays and handing out treats donated by local businesses
0
May 10, 2020 6:30 AM By: Kevin Berger 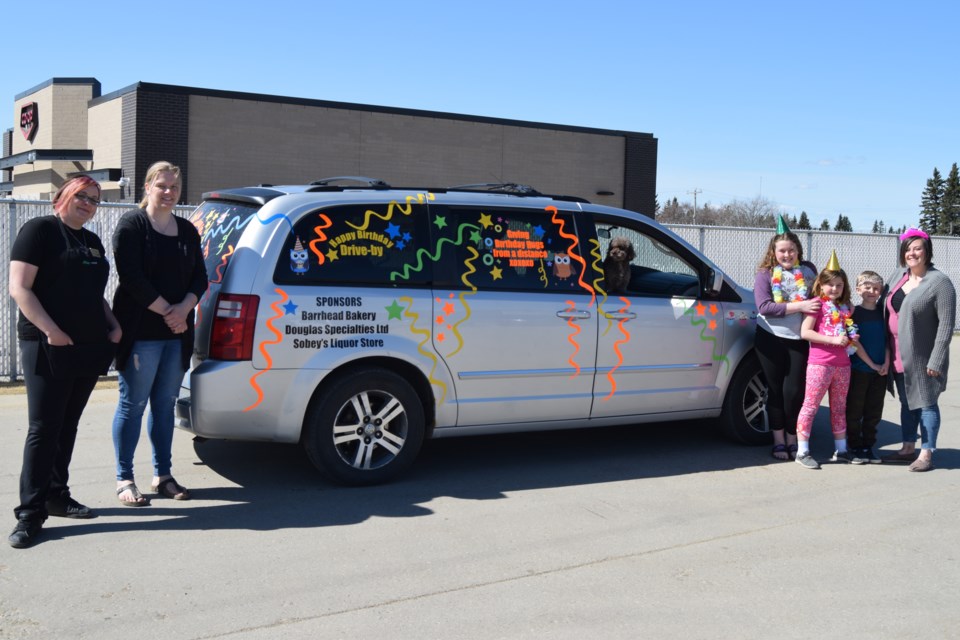 While the COVID-19 pandemic may have nixed most birthday parties, Tresa Brodersen of Barrhead (far right) is helping to bring some birthday cheer by driving over to people’s houses in her specially-decorated van and handing out goodies. She is often accompanied by her children Jax, Rijker and Aspyn Van Soeren , as well as their dog Raff (who can be seen leaning out the window). They honk horns and turn on sirens upon arrival and then donate four cupcakes donated by Anja Donkers at the Barrhead Bakery (second from far left). Adults also get some alcoholic treats donated by Shawna Costello of the Sobey’s Liquor Store.

A Barrhead resident is helping to bring some birthday cheer to those who are unable to host their own parties during the COVID-19 pandemic by rolling up to their houses in a decorated van and handing out some age-appropriate treats.

About a month ago, Tresa Brodersen heard via a friend on Facebook about a “birthday parade” that rolled by her house in Fort McMurray, and she thought that it might be fun to have her own birthday van.

She said it was a way “to spread joy and keep everybody’s spirits up,” including her own. Plus, it’s a good way to get out of the house and “keep our hands out of the chip bag,” she joked.

After decorating her van with some birthday wishes, she then began accepting invitations to swing by the houses of people celebrating birthdays through her Facebook page, which is set up under the name Tree-sa Bee.

Tresa said she typically swings by houses around 4-7 p.m., which allows for people to be off work and for her three children to be done with homeschooling.

She and her kids Jax, Rijker and Aspyn wave to the folks in the house, blow bubbles and generally make a lot of noise.

“It’s kind of a show, right? We’re tooting, we have music going, we have a microphone we can yell into. It’s pretty fun,” she said.

She said she also has a police siren that she will play when pulling into yards, which has spooked a few people who don’t know what’s going on.

Tresa has also gotten some help with the community in her mission to spread birthday cheer. Not long after she started doing the birthday drive-bys, the Barrhead Bakery offered to provide her with four cupcakes to hand out to everyone who is celebrating a birthday.

The Sobey’s Liquor Store has also provided Tresa with a basket of alcoholic goodies that she gives to adults. As well, Douglas Specialties approached Tresa to decorate her van in vinyl and provide some signage.

“So there’s quite a few people who have come together to make it really successful for us,” she said.

Though things started out slowly, Tresa said she’s been getting as much as one to two requests per day to swing by people’s houses to spread birthday cheer.

Popular grant funding reallocated indefinitely
May 29, 2020 11:08 AM
Comments
We welcome your feedback and encourage you to share your thoughts. We ask that you be respectful of others and their points of view, refrain from personal attacks and stay on topic. To learn about our commenting policies and how we moderate, please read our Community Guidelines.