Program originally began in February and started up again when in-person classes resumed in September
Dec 29, 2020 9:00 AM By: Kevin Berger 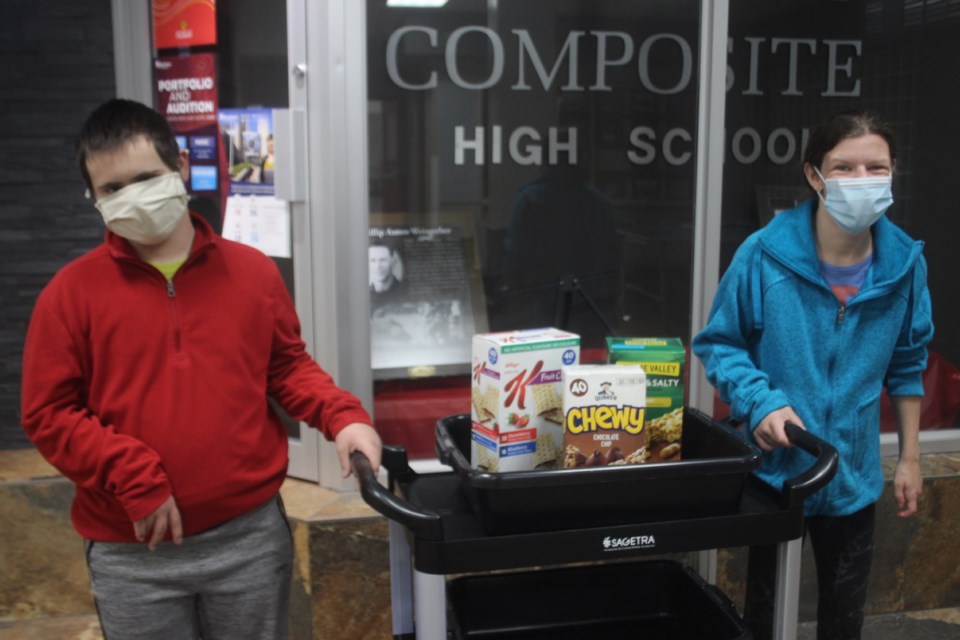 Caleb Steen and Chanel Pearson stand by one of the rolling carts used to transport food bins to classrooms at Barrhead Composite High School as part of the breakfast program. Caleb and Chanel are both part of the Work Experience program. The students in that program wheel out the bins, which contain items like granola bars, apples, bananas, oranges, sandwiches, apple sauce, muffins and bagels.

The idea of introducing a breakfast program at Barrhead Composite High School (BCHS) was originally inspired by a presentation from author/educator Jody Carrington during a professional development at a teacher’s convention.

BCHS teacher Lisa Schonknecht said she was listening to Carrington — the author of “Kids These Days: A Game Plan for (Re)Connecting With Those We Teach, Lead and Love” — about how teachers need to do something different for students beyond leading them through lessons in the classroom.

“It gave of me the motivation to get started on a breakfast program," she said.

Arranging for donations of food or money to run such a program was the first step. Schonknecht indicated there was little in the way of grants — most of the focus with such initiatives is on K-6 students.

However, she approached Aaron Coutts of Frieson Bros. and he arranged to provide cereal, milk, apples, oranges, peanut butter and jam for the first three weeks of the program.

The local Tim Hortons also donated muffins, bagels and biscuits for the start of the program  (and continues to remain a supporter), while the Barrhead and District Rural Crime Watch contributed $1,000 to purchase supplies in March 2020.

At its start, Schonknecht said the program was set in the food services lab at BCHS and they would just make an array of items available for students to grab as they headed to class.

“But now obviously with COVID, we run it quite differently,” she said.

Now the program has a number of BCHS staff involved in it. Two staff members, Heather Fisher and Brenda Teasdale, arrive at school early each day and select items to be placed in bins.

Later, students from the Work Experience program deliver these bins via carts to each classroom. The bins are available throughout the day and teachers are effectively responsible for enforcing a “You touch it, you take it” policy.

The bins are then collected at the end of the day by the same Work Experience students.

Other supporters have come on board with the program; Schonknecht said she successfully applied for a grant through the Pembina West Co-op where they are provided the cost of food plus 10 per cent.

The Barrhead Food Bank also helps out with the program when they have a surplus of supplies, and as a result, there are sometimes miscellaneous food items included with the usual menu mentioned above.

It was also learned late last week that the Barrhead Steelers have decided to make the breakfast program the recipient of the Midget hockey team’s fundraising dollars at Christmas, and JS Jewelry is also contributing a percentage from each sale during the first portion of December.

Schonknecht said the joy of the kids when food bins are brought into the classroom is something to behold.

“We just found there was a need in our school. There are lots of different reasons that students are coming to us hungry,” she said.

It’s easy to assume that high school students could take care of themselves even if they live in troubled environments, but as pointed out by Trisha Enman (who heads up the Work Experience program), what if there is no food in their house? What if they live in a rural area and accessing a store is difficult?

Plus, there are lots of students who are riding on the bus for long periods of time to come to BCHS, and while they may eat breakfast, it could still be a break of four or more hours between breakfast and lunch.

The fact that the bins are in every classroom means that kids also don’t have to stand out when asking for food — it's basically there for everyone, Enman indicated.

“It’s nice that the kids now know that it’s available. They can reach out any time and feel comfortable telling an adult in the building that they’re hungry. And staff know where to go,” she added.

It’s also a positive experience for the students in the Work Experience program to interact with other students in a non-academic context, Enman said.

Obviously the breakfast program isn’t running right now due to in-person classes being suspended until Jan. 11, 2021 (though students can still come into the school and ask for food if they really need it). But the food bins will resume being rolled out to classrooms when school resumes in the new year.

“It’s really being utilized. And I think it’s making a big difference for kids in the building,” Schonknecht said.