Town of Barrhead bylaw would not become active until certain, yet to be determined criteria are met
Oct 20, 2020 9:15 AM By: Barry Kerton 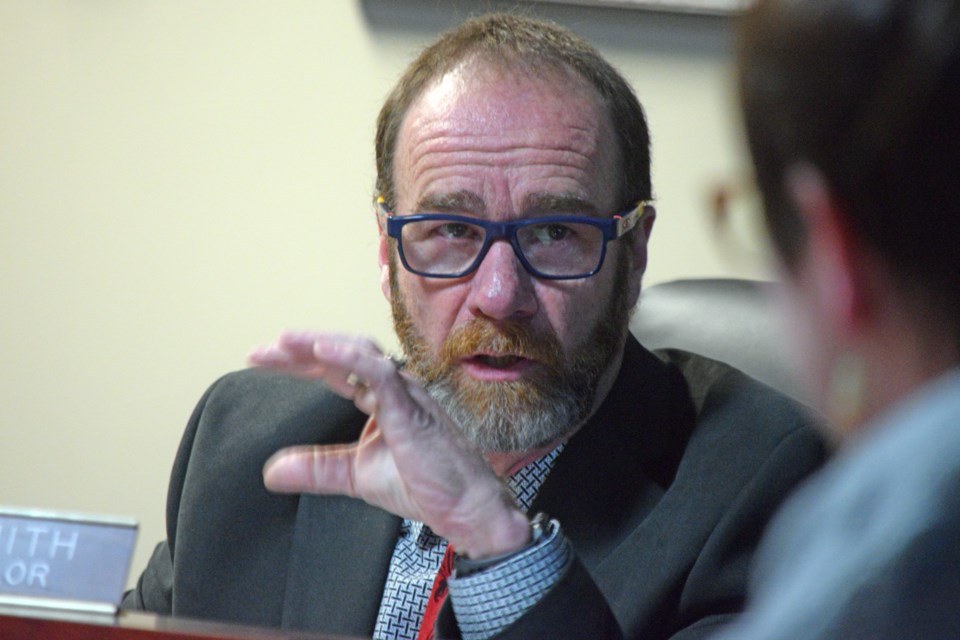 Coun. Don Smith said council needed to be proactive and start the process for a face covering bylaw, in case it is ever needed. Barry Kerton/BL

However, they decided to leave the door open to the possibility. And while council still hasn't enacted such a bylaw, they want to be ready in case one becomes necessary.

Councillors, during their Oct. 13 meeting, instructed administration to draft a mandatory mask in public spaces bylaw for their consideration.

The move comes on the heal of a spike in coronavirus cases across the province, especially in the Edmonton region.

Coun. Don Smith asked for the topic of a potential future face coverings bylaw be put on the agenda at the last minute.

"This way we would be giving our residents time to digest it," he said. "This could happen if we get to eight, or ten [active COVID cases] or whatever that number is. It won't be council telling residents that tomorrow that they have to have face coverings on in all public spaces."

Coun. Rod Klumph supported the concept of such a bylaw but questioned who would enforce it.

Smith said since it would be a municipal bylaw he envisioned enforcement would be the responsibility of the community's peace officer.

"If he's driving around and sees someone without a face covering, we would be the ones instructing him by giving him a set of tools," he said. "But we would hope by that time the municipality would do the right thing. They have proven themselves already that they are able and willing to do the right thing, by the relatively few cases that we have had."

Smith added that although in the past, most notably at the Aug. 11 council meeting, he has stated that any requirement for wearing masks in public should come from the province, as a council they needed to be proactive.

Mayor Dave McKenzie supported the idea of a potential bylaw but suggested that they should use different criteria than the number of active COVID cases.

"What if instead of having a specific number, if we felt it was just getting out of control," he said. "Numbers can get skewed. There are a lot of variables to think about, not just a number."

Smith said whatever the criteria the bylaw uses, it would need to be something tangible.

To get around relying on straight numbers, the bylaw could include guidelines in how those numbers are recorded.

He gave the example of a potential COVID breakout at one of the municipality's senior residences.

"That is a separate case in itself," he said. "It is a facility if there were 10 cases in Hillcrest, Shepherd's Care, [Barrhead Continuing Care] or anything like that, it should be treated as one case. It is in a bubble of its own. No one is allowed in or out anyway."

Coun. Ty Assaf interjected, saying it is not only senior facilities that if a coronavirus outbreak should occur that should be treated as a single case.

"You could have a business that has several employees that work closely together and they all become infected that doesn't mean that the outbreak is out in the community," he said.

Klumph suggested administration should look at what other communities who have enacted face-covering bylaws have done for guidance.

Coun. Leslie Penny added any criteria the bylaw includes, it should also include input from the community's public health inspector.

"We should be looking at them to see when they say 'it is time to mask up everybody,'" she said.

Chief administrative officer Edward LeBlanc interjected that just because Alberta Health Services states that there are a certain number of cases in Barrhead, it does not mean it is an issue for the Town of Barrhead.

Using the example of the situation on Oct. 13, where according to the coronavirus status map maintained by the Alberta government the County of Barrhead had four active cases, he said potentially none of them was in the Town of Barrhead.

"They could be anywhere. One case could be in Thunder Lake, another in Neerlandia and two more in Dunstable," he said.

Smith proposed that administration inquire about the possibility of the province releasing a more detailed report of where active cases were located.

LeBlanc said he would inquire, but was not sure how successful he would be.