County of Barrhead public works Supt. Calvin Fischer has been lauded by his peers at the Alberta Municipal Supervisors Association (AMSA). CAO Debbie Oyarzun informed councillors of the fact during her report at the April 3 meeting.
Apr 10, 2018 12:00 AM By: Town And Country Today Staff 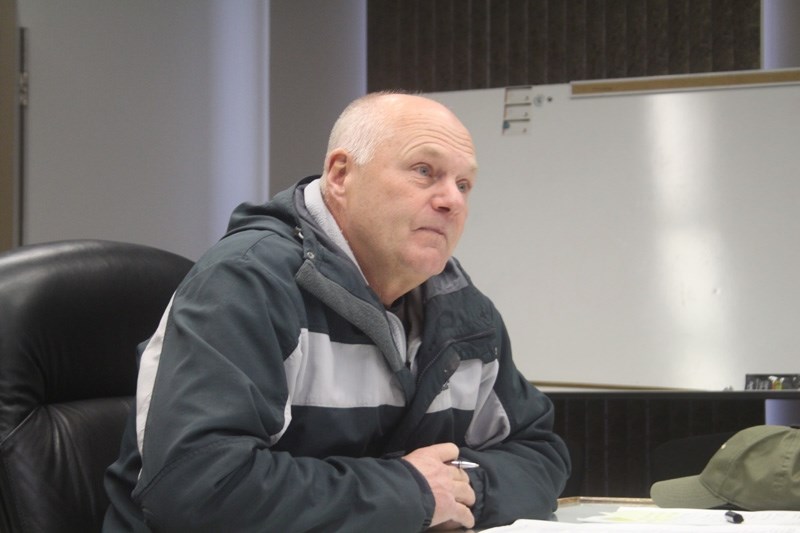 County of Barrhead public works Supt. Calvin Fischer received kudos from council and staff for his peer award from the Alberta Municipal Supervisors Association, during the regular meeting of council on April 3.

County of Barrhead public works Supt. Calvin Fischer has been lauded by his peers at the Alberta Municipal Supervisors Association (AMSA).

CAO Debbie Oyarzun informed councillors of the fact during her report at the April 3 meeting. The ASMA Peer Award winner is selected by the board and is awarded annually to a long-standing member of the association who has provided valuable input over the years. Among the reasons for Fischer’s nomination, Oyarzun said the association noted he had provided support and advice to the ASMA as a whole, as well as directly to individual members and was a key player for over six years on a provincial committee tasked with reviewing financial and other matters relating to the local bridge program.

The AMSA mandate includes helping members form stronger bonds with the municipalities they represent, educating members through seminars and sharing best practices and engaging related industries for training opportunities. They meet twice annually for the purpose of fellowship and the sharing of mutual concerns. In addition, the AMSA supports the goals and aims of the Rural Municipalities of Alberta, formerly known as the Alberta Association of Municipal Districts and Counties.

“For those of us who attended the last Rural Municipalities of Alberta conference, we did attempt to surprise him by attending unannounced and while we, myself, assistant Supt. Ken Hove and others had prior knowledge, we managed to keep Cal’s nomination a secret from him for several months,” Oyarzun said, adding she thought it was nice to be able to recognize his accomplishment in council.

For his part, Fischer said he was honoured.

“I did wonder why Debbie [Oyarzun] and some of the other councillors were at the conference. It caught me totally off-guard and was a nice surprise,” he said, adding he was still waiting on the award itself as there was a spelling mistake in his last name.

Flood watch issued for Pembina River
Jul 3, 2020 2:35 PM
Comments
We welcome your feedback and encourage you to share your thoughts. We ask that you be respectful of others and their points of view, refrain from personal attacks and stay on topic. To learn about our commenting policies and how we moderate, please read our Community Guidelines.