Blue Heron Support Services floats the idea of an event that would bring attention not only to their organization, but the community
Jan 1, 2020 12:17 PM By: Barry Kerton 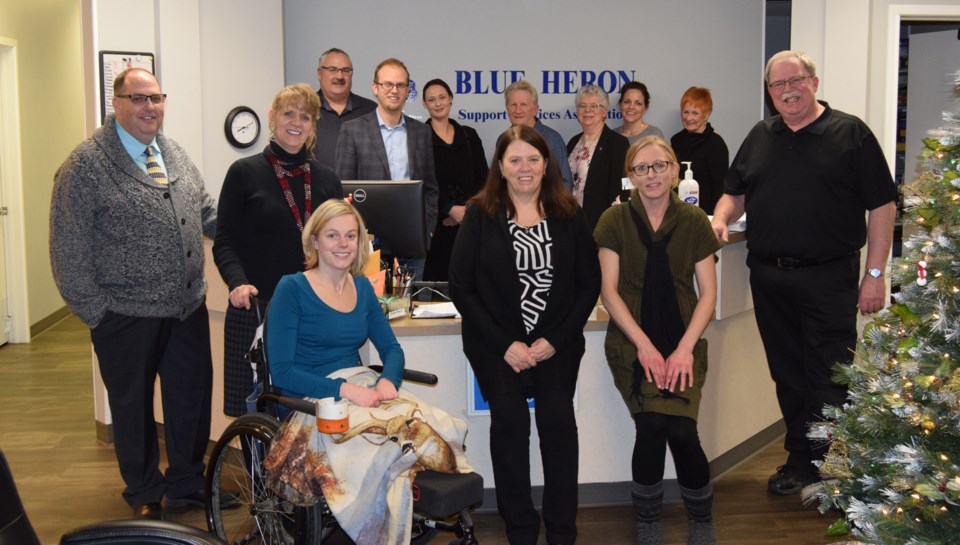 On Dec. 17, the Blue Heron Support Services board hosted a wine and cheese event to raise the public's awareness about the services they provide. Back row, L-R: Bob Dodds, Peace River-Westlock MP Arnold Viersen, Pia Grieg, Ralph Helder, Trudy Gammel, Tara Tiggelaar and Judy Bain. Front row, L-R: Tim Griffin, Diane Lander, Stephanie Gansekoele, Diane Magill, Trisha Enman and Town of Barrhead mayor Dave McKenzie. Except for Viersen and McKenzie, all the people pictured are either part of the association's board or an employee. Barry Kerton/BL

BARRHEAD - Just how many people would it take to surround the Town of Barrhead if they held hands?

It isn't a question anyone seemed to have a definitive answer for during a Dec. 17 get-to-know-you session wine and cheese event at Blue Heron Support Services Association (BHSSA).

The board of the not-for-profit organization, which has outlets across Northern Alberta, held the session to let prominent citizens in the community, including Town of Barrhead mayor Dave McKenzie and Peace River-Westlock MP Arnold Viersen, know more about what they do.

The organization was first formed in 1974 but changed its name officially to the BHSSA in 1989.

Its mandate said program director Tim Griffin is to help individuals with developmental, physical, sensory and/or brain injuries. The BHSSA also provides adult continuing education opportunities as well as programs to support caregivers of those who suffer from the above conditions mostly by providing respite.

However, despite all this work and the number of people the association employs, about 270 across all its offices, not including contractors, with the vast majority coming from Barrhead.

That is one of the reasons why board chair Judy Bain said they needed to host an event to draw attention to the association and the work it does for their clients.

Throughout the evening, board members touted several success stories about how BHSSA clients have gone on to live independently and becoming valued community members who go on to help with countless charity endeavours.

"I think by bringing the community together doing something like this it would touch so many people," she said, adding the event would likely garner national media attention.

However, the group did not believe it was feasible, noting it would take several more residents than the community has to accomplish such a feat.

McKenzie suggested a more realistic goal was for the community to link hands around the borders of Cecile Martin Park, which is roughly one kilometre in circumference.

"It is a large grassy area where you could have other events going on and is close to the schools and two senior facilities," he said.

Bain interjected the event would give BHSAA as well as other not-for-profit organizations to let the broader community learn about what they offer, adding she envisions it as an event that could include a mini-trade show open to groups outside Barrhead.

"We will need a committee to make it happen and I know it isn't a small task but I think it would be wonderful," she said.

Treasurer Ralph Helder suggested by linking the event to a specific day such as May 15's International Day for Families could help the event get an extra push.

"It would help focus the event,"

Viersen offered his help contacting organizations to attend or help with the event.

"One of the things I've discovered being an MP is that often my phone works better," he said. "For some reason, people seem to pick up the phone when the MP is calling."

Bain said after the holidays, organizations can expect to get a letter better detailing the event.

Remembering the forgotten war
Aug 7, 2020 6:30 AM
Comments
We welcome your feedback and encourage you to share your thoughts. We ask that you be respectful of others and their points of view, refrain from personal attacks and stay on topic. To learn about our commenting policies and how we moderate, please read our Community Guidelines.