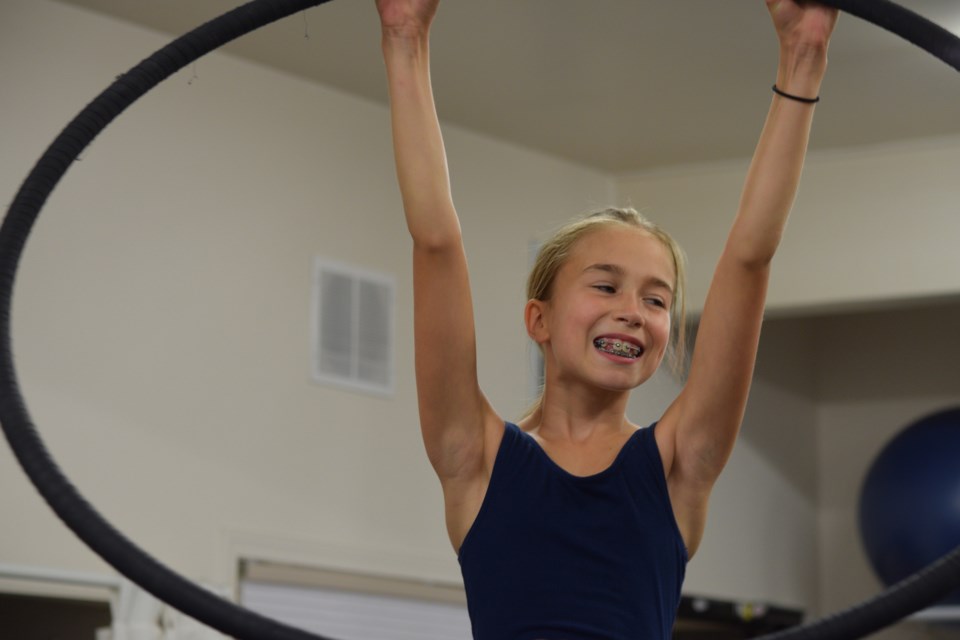 Valiana Zubot-Davis is all smiles as she learns how to master the hoop during an Aug. 26 circus themed summer dance camp session. Barry Kerton/Leader staff

It has been a difficult spring and summer for Footworks Dance Academy owner and artistic director Irene Widdup.

Like many businesses, Footworks has been impacted severely by the coronavirus and the associated public health restrictions.In March, as a business designated by the province as non-essential, Widdup was forced to close its doors.

And they stayed closed until recently when Footworks hosted two-week-long summer dance camps.

Widdup said the forced closure came at an impromptu time.

As a business whose clientele are mostly school-aged children Footworks programs parallel that of the school season and as such they were in the process of preparing for several out of town dance competitions and festivals in May.

For each of these competitions, Footworks students had to pay an entrance fee, which they submitted to Widdup who would then forward the funds to the various event organizers, much like a minor hockey team would when they enter a tournament.

"The people who put on those competitions and festivals, it is their livelihood ... and they've already spent a lot of the money, renting theatres, getting medals, et cetera and in many cases, the money isn't there to refund dance schools and parents," she said.

Widdup was fortunate as the events Footworks were registered to go to did refund students money or provide a credit, but it did not come without a lot of work.
She noted she spent many hours on the phone negotiating with organizers to achieve that result.

And although Widdup loves and has a passion for dance in that she tries her best to pass on to her students, at the end of the day, it is also her livelihood.
One she wasn't confident she would be able to continue.

"It was scary. There was a point when I thought, are we going to make it through this as a business," Widdup said.

Part of the reason for her uneasiness was not knowing when or if she would be able to open her doors again.

Originally, according to the province's economic relaunch plan, Widdup said businesses like hers were slated to open in Stage 3. The government has yet to announce a target date for Stage 3 reopening.

One of the reasons why she believes this is the case is because dance schools are thought to part of the fitness industry.

Fortunately, Widdup said she had the opportunity to talk to Alberta's chief medical officer during a telephone town hall as president of the Alberta Dance Educators Association which enabled her to reopen her doors in Stage 2.

With the information she garnered from those sessions, she was able to help come up with a protocol which was approved by Alberta Health Services (AHS) to allow businesses such as Footworks operate.

The guidelines start before a student enter the building with parents going through a health check questionnaire with their child, similar to the one they will have to go through before the start of each school day. Dance students will then be asked about their health status again and be subjected to a temperature check before being allowed into the building. Once inside the building, students must wear masks at all times as do the instructors, except for when they are inside the dance studios.

"AHS has advised that it is unhealthy when doing high activity and are breathing heavily activity," Widdup said.

To help aid in physical distancing the studios have gridlines taped off on the floors and mats. The studios also have limits on the number of students in each room.

"When students are using the warm-up bar we've created cloth sleeves that they can use so they don't have to directly touch the bar," she said.
All of this is in addition to a rigorous cleaning regime, which includes wiping down the equipment after each use and numerous small rest/hygiene breaks to allow students to wash or sanitize their hands.

As part of the precautions, parents will not be allowed to watch their children perform at least in person. Widdup noted she is in the process of setting up a system which will allow parents to watch the proceedings online.

"All of this is a huge undertaking that comes at a cost, but that is what is necessary and it will be with us for a long time," Widdup said, noting the Alberta Dance Educators Association expects such guidelines to be in place for at least two years.

That being said, she is confident the industry will survive, but added the association expects even after COVID ceases to be an issue, it will take an additional two years to bounce back to the levels before the virus.
bkerton@barrhead.greatwest.ca

Barrhead Curling Club prepares to smash some rocks
Sep 17, 2020 12:30 PM
Comments
We welcome your feedback and encourage you to share your thoughts. We ask that you be respectful of others and their points of view, refrain from personal attacks and stay on topic. To learn about our commenting policies and how we moderate, please read our Community Guidelines.