Arnold Viersen says he is firmly opposed to conversion therapy, but couldn’t support bill without changes
Nov 4, 2020 10:28 AM By: Barry Kerton 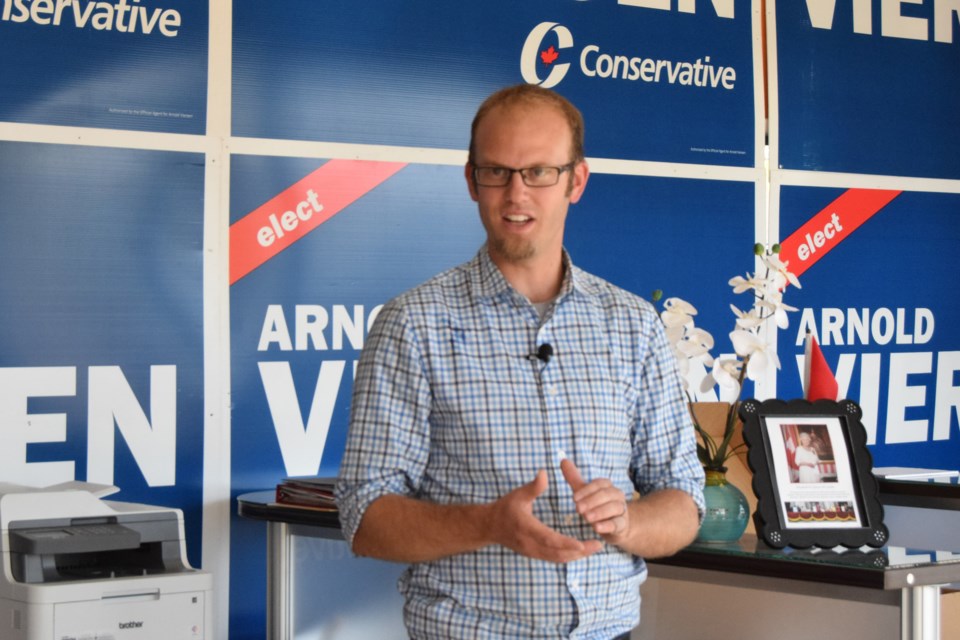 Arnold Viersen pictured here kicking off his election campaign in Barrhead recently voted against two bills, one on medically assistance in dying, the other a bill that would outlaw conversion therapy.

BARRHEAD/WESTLOCK - It has been a fight Peace River-Westlock CPC MP Arnold Viersen has been fighting for four years.

For the original bill, Viersen put forward a long series of amendments to the proposed law, all of which he said the government defeated.

Fast forward four years, and MAID legislation is once again before MPs, this time labelled as C-7, which would amend the law on to bring it into compliance with a Quebec court ruling last fall.

The ruling struck down a provision in the law that restricted access to assisted dying to those whose natural death is reasonably foreseeable.

Viersen stated his concerns about the proposed legislation in Parliament Oct. 19.

“This bill is much broader than the court decision, and I would argue that we continue down the slippery slope. When Bill C-14 was introduced, I remember talking about the slippery slope and being assured it was not a thing. Yet here we are, removing safeguards from the bill,” he said. “Prior to this bill, there was a requirement that a person’s death be reasonably foreseeable ... Now we see the courts are taking that off and the government is not even defending it … [In Bill C-7] we are creating two classes of citizens: one for which suicide prevention is available and one for which it is optional.”

The bill now moves on to the House of Commons justice committee for further study.

The bill, which was in its second reading passed 308-7. CPC leader Erin O’Toole allowed his MPs a free vote on the issue.

“I want to be clear that I am opposed to the practice of conversion therapy and support efforts to eliminate it. Many of the conversion therapies used over the years were degrading, harmful and attack the very core of human dignity. No Canadian should be forced to change who they are,” Viersen said in a statement to the Barrhead Leader.

“I also believe the legal definition of conversion therapy in Bill C-6 must be clear to ensure no one is denied the freedom of pursuing the help and counselling they choose and conversations with parents and counsellors are not criminalized.”

He added that instead of improving the bill by listening to the concerns of several CPC MPs on the definition of conversion therapy and incorporating them, the government decided to reintroduce the same bill instead.

Viersen said he would support the bill in third reading if the government adds a statement saying conversion therapy does not include: “private conversations in which personal views on sexual orientation, sexual feelings or gender identity are expressed such as where teachers, school counsellors, pastoral counsellors, faith leaders, doctors, mental health professionals, friends or family members provide support to persons struggling with their sexual orientation, sexual feelings, or gender identity.”

County of Barrhead approves FCSS budget
Nov 25, 2020 12:14 PM
Comments
We welcome your feedback and encourage you to share your thoughts. We ask that you be respectful of others and their points of view, refrain from personal attacks and stay on topic. To learn about our commenting policies and how we moderate, please read our Community Guidelines.