Adults with disabilities go to camp for free 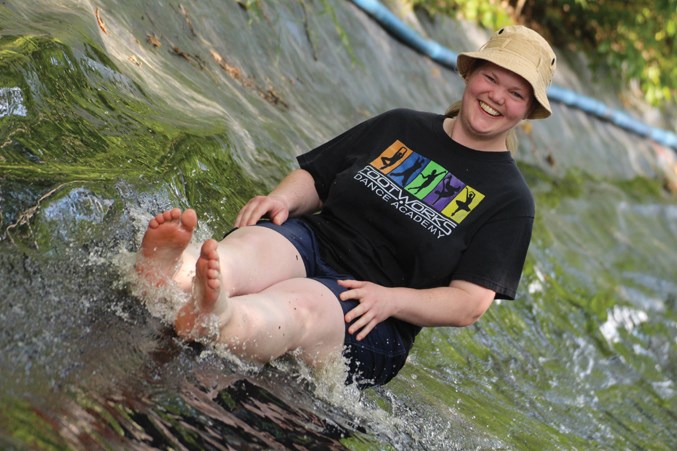 More than 50 adults with disabilities were provided the camp experience free-of-charge last week as the Bethel Bible Camp held its CAYA camp Aug. 6-9.

With the help of local volunteers, the bible camp welcomed a crew of 24 people from Vancouver, and 30-some more locals mostly from Westlock and Barrhead for its Come As You Are camp.

“Camps are expensive to go to, and she wanted to provide a place for people to go to who couldn’t go otherwise,” said pastor Tim Gurnett who sits on the bible camp board, about the original intent of the camp.

About 15 years ago, pastor Gurnett said the board of Bethel noticed that people with physical or mental disabilities had few options in terms of camp-related activities. Fewer still were free.

Gurnett’s brother, John, was the camp director for the week. Himself a pastor in Vancouver, he has made the drive out with about 10 to 20 campers for the past four years.

CAYA is a little more relaxed than a usual camp, but the days run in a pretty usual fashion for anyone who’s ever attended a camp.

“Kind of unique at CAYA camp is that we don’t have a group doing chores. It’s totally volunteer, because some of our guys here love to do chores … but some of them, it’s just beyond their capabilities,” said John Gurnett.

There’s the usual get up and grab breakfast, but at Bethel it’s followed by chapel time, then lunch and a rest period. But after, the activities begin. On Friday, campers went down the waterslide, and later in the night 18 of them put on a talent show.

Each day also ends with a campfire.

For some of the people who come with pastor John, this is the only time they leave the province. Everybody who comes knows it as "Alberta camp."

Because the camp is adult-only, pastor Tim says there are people who have come for 10-12 years.

The challenge for volunteers at CAYA is the fact that more people than usual come with medication needs, but the volunteers don’t seem to see it as a point of worry.

“I am simply amazed at this camp. For all these people, it’s the best week in their whole year. There’s 32 people who need meds,” said volunteer nurse Bea Hawryluk.

She’s been the volunteer nurse at CAYA for many years, and pastor Tim said it’s the one that she likes because she used to work in the disability field.

Several area-churches support the camp, some from Westlock, others from as far away as Edmonton.

CAYA is only one of the camps which runs out of the Bethel grounds. Throughout the summer, there are day camps for little kids, and other overnight, age-based camps, as well as a soccer-focused one.

“We have two staff workers (maintenance and paperwork) but everyone else is a volunteer,” said pastor Tim.

Over the course of the summer, about 200 people volunteer overall at Bethel.

Bethel Bible Camp has been around since 1943, originally based in Neerlandia on a farmer’s land, then it moved to its current location on the Pembina River in 1945.