The report suggests that direct-to-consumer, ebook and audiobook sales are up. And according to BookNet Canada, a print sales tracking agency, retail book sales have bounced back since the initial shock of last spring's shutdown.
Dec 11, 2020 11:15 AM By: Canadian Press 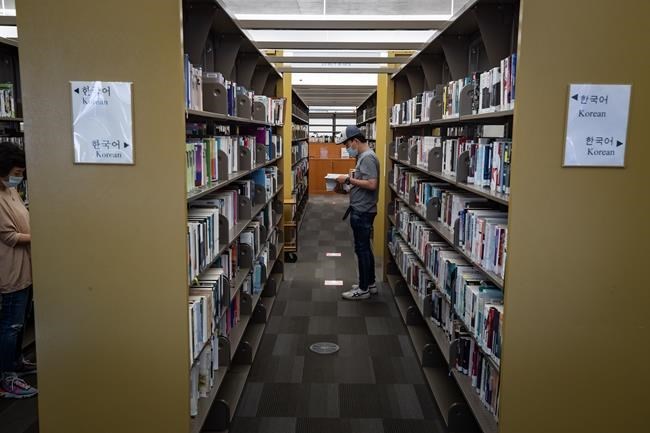 A man wearing a face mask browses books at Vancouver Public Library's central branch after it and four other branches reopened with limited services, in Vancouver, B.C., Tuesday, July 14, 2020. A recent survey suggests that many Canadian publishers are expecting to see sales revenues slashed nearly in half this year as the COVID-19 crisis has made it harder for readers to find homegrown titles. THE CANADIAN PRESS/Darryl Dyck

Many Canadian publishers are expecting to see sales revenues slashed nearly in half this year as the COVID-19 crisis has made it harder for readers to find homegrown titles, a recent survey suggests.

The Association of Canadian Publishers gathered data from 73 independent English-language publishing houses between Oct. 27 and Nov. 6 about the pandemic's impacts on the industry.

Of the 61 firms that responded to a question about how the crisis has affected their bottom lines, nearly half projected at least a 40 per cent drop in sales revenues compared to 2019. Ten per cent of publishers are bracing for losses of at least 60 per cent.

The report suggests that direct-to-consumer, ebook and audiobook sales are up. And according to BookNet Canada, a print sales tracking agency, retail book sales have bounced back since the initial shock of last spring's shutdown.

But Kate Edwards, executive director of the Association of Canadian Publishers, said the trade group's findings indicate that small and medium-sized publishing houses are still struggling to make up for retail losses.

This raises concerns not only for the health of the domestic publishing sector, she said, but the vitality of Canadian literature.

"Canadian publishers are committed to Canadian writers," Edwards said by phone on Thursday. "This is their ability to invest in the next generation of writers, and to tell stories that are important to Canadians."

Small and mid-sized presses publish the majority of Canadian-authored books each year, including releases from first-time writers, regional titles and stories that cater to niche audiences, Edwards said.

But she said it's been hard for readers to discover these "hidden gems" as COVID-19 restrictions have deterred customers from browsing through bookstores.

And as the holiday sales rush approaches, Edwards said publishers worry that Canadians will turn to the bestsellers list and old favourites rather than giving the gift of the next homegrown hit.

She said the outlook for the Canadian market is all the more uncertain in light of last month's news that Penguin Random House, the largest American publisher, is buying New York-based rival Simon and Schuster in a deal that's set to fortify the global consolidation of the publishing industry.

Canadian-owned publishers need more federal support to compete with these multinational giants as they recuperate from the financial fallout of the COVID-19 crisis, Edwards said.

Many of the association's members have relied on emergency support funds to maintain operations during the pandemic, she said.

As the industry looks toward long-term recovery, Edwards called on Canadian Heritage to increase the permanent annual budget of the Canada Book Fund from $38.4 million to $58.4 million.

A Heritage representative said the department was unable to comment by deadline on Thursday.

Despite the financial blows 2020 has brought, Edwards said many publishers remain cautiously hopeful for the future of the industry.

"As we move through the latest waves of the pandemic, and the closures that accompany them, we're able to look a little bit further out," she said. "And with that optimism also comes some concern about long-term sustainability."

This report by The Canadian Press was first published Dec. 10, 2020.