Elvis comes to the Prairies 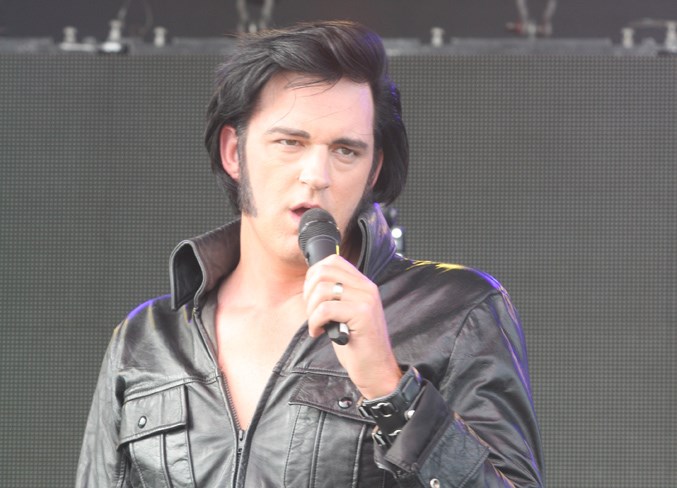 More than 3,000 Elvis Presley fans made their way to the hamlet of Busby Aug. 23-25 for a weekend tribute to the King of Rock n’ Roll at the 11th annual Blue Suede Music Festival. (Pictured) Adam Fitzpatrick, Calgary.

Some say the King of Rock n’ Roll is not dead.

In fact, some say an 84-year-old Elvis Aaron Presley lives and breathes to this day and regularly visits his former home in Memphis, Tennessee, to hobnob with the thousands of fans who visit Graceland every year to pay tribute to the renowned performer. That’s what some say.

Some also say he lives on the moon.

Regardless, he is celebrated, and by the thousands who attend the Blue Suede Music Festival in Busby every year, he is revered.

The small hamlet south of Westlock County, grows by leaps and bounds for one weekend every summer when not only fans of the King gather there, but more than a dozen tribute artists take to the stage to sing their hearts out for the most diehard of fans who, along with the performers, come from across Canada and the United States.

This year’s Blue Suede Music Festival took place Aug. 23-25 at the Busby Sports Grounds. It was the eleventh annual event and founder Trudy Taphorn said she was expecting more than 3,000 people to attend, as it just keeps growing larger every year.

“We started it on our acreage and had no intentions of it getting this big,” said Taphorn as the RVs began to pull into town Friday morning. “It’s very exciting to see it all come together. It’s so much work, but as it’s coming together it’s like, ‘Wow, it’s happening again.’”

It’s definitely not Las Vegas, it’s more a festival to recognize the legendary performer northern Alberta-style, with hundreds of RVs and campers crammed into the grounds, food trucks and concessions, a beer garden, merchandise stands, selling Elvis and Oilers memorabilia, along with a few thousand lawn chairs filled with Elvis-lovers of all ages in a baseball diamond, in front of a small stage to see some of the greatest tribute artists of one of the greatest performers of all time.

Along with admission, guests are asked to bring a donation for the food bank. Bags and bags of groceries can be seen piling up throughout the weekend and are distributed to food banks in Westlock, Barrhead and Morinville. Even this is keeping in the spirit of Elvis, in that it replicates his generous nature and has been a feature of the festival since it started.

“Elvis was so big for charities. He loved charities,” said Taphorn. “He often gave away more than he made. He would have to be told not to give away so much stuff, like cars and houses ... His love for charity is so renowned and I wanted to do something as well, so I told people to come and enjoy this Elvis music and bring a donation to the food bank.”

The festival came into existence after Taphorn accompanied a tribute artist friend to the Penticton Elvis Festival, where she met a lot of other performers. She soon realized there was very little Elvis-related entertainment between the B.C. city and Callingwood, Ont., so she stepped up to fill the void.

That first year, about 100 people attended the Taphorn acreage, just outside of Busby, and the festival has only blossomed from there. The next year, 250 people showed up and the year after that more than 500, which was when the event was moved into Busby.

It has attracted tribute artists from near and far, some very local and some from as far away as Texas. Taphorn said she even has a German performer lined up for the 2020 event, so it will soon become an international affair.

This year’s VIP guest was Cynthia Pepper, a Hollywood actor, who starred in the movie Kissin’ Cousins, alongside Presley in 1964. She was also cast in the hit TV show My Three Sons and had a number of smaller roles on several TV series throughout the 1960s and 70s. She told old Hollywood stories from the stage and took questions from the audience.

Elvis died in 1977 at the age of 42. This year marks 42 years since his death, so Elvis has now been dead longer than he was alive. He is still put on a pedestal by his most sincere fans though. People are not only drawn to the music and the movies, but also to the story of Elvis’ life.

“It’s a rags-to-riches type of story,” said Taphorn. “When Elvis grew up, he was dirt poor. They did a number of midnight moves because they couldn’t pay rent. At one point, nobody wanted to be associated with the Presley name. They were poor people from the wrong side of the tracks.”

“He never forgot where he came from. He never forgot that he was dirt poor and that’s why he gave away so much stuff ... If somebody was in need, Elvis helped them. That kind of stuff is pretty special.”

The festival is becoming more and more well known to tribute artists as well, who make an effort to travel to Busby every opportunity they get.

It was the third time at the festival for Richard Wolfe, who hails from Hamilton, Ont. and is just back in Canada after performing for audiences in California and Las Vegas earlier this summer. At 25, he’s already been an Elvis tribute artist for 11 years.

It’s likely this fandom that has kept the spirit of Elvis alive for all these years.

“If the fans want it, we’ll give it. That’s just the way it is,” said Wolfe. “It’s so crazy that he’s been dead for 42 years, longer than his lifespan now, and it keeps getting bigger and better every single year and there’s generations and generations ... It works wonders and as an Elvis fan, I’m proud of that because the generations are going to keep this alive.”

Edmonton’s Jaedyn Pilon is also a veteran of the blue suede Busby stage. He’s only been at it for four years, but he has been a fixture at the festival and other events throughout the region. His first love though, was the Beatles, whose first love was incidentally Elvis Presley.

“I was a huge Beatles fan when I was younger and I wanted to be in a Beatles tribute band,” said the 17-year-old. “But my Dad said it was a lot easier to be one guy, like Elvis, instead of having too find three other guys to be the Beatles with.

“I started listening to some of his music and I saw the Million Dollar Quartet in Vegas and I saw the guy doing all the moves and I just thought, “Ya, I might as well try to do that.”

So what goes into stepping into the shoes of a king?

Pilon said it starts with the hair.

“The first thing is the hair. That takes about an hour, then I just warm up the vocal cords, listen to a lot of Elvis and just get ready to rock n’ roll.”

Pilon said he plans on performing for many years to come and is always happy to see his fellow tribute artists and to learn from them as much as he can.

“It’s like a brotherhood, or a family reunion for all of us. Everyone has their way of looking at Elvis, but we build off that energy from everybody else and that helps us have a bigger and better show,” said Wolfe.

So maybe Elvis does live, just not on the moon, but instead through his music and in the hearts and minds of those who try their best to pay tribute, whether it be through getting up on stage in a sequined jumpsuit or just being there to listen to the music.

Taphorn said she’s already full for next year, so Elvis really will live on.