It started with a bit of friendly bravado between three friends. On a Friday night at the Fort Assiniboine Legion, three friends Zac Marcellus, Tyler Thompson and Dausen Kluin, went for a night of chicken wings and socializing.
Aug 27, 2019 12:01 AM By: Barry Kerton 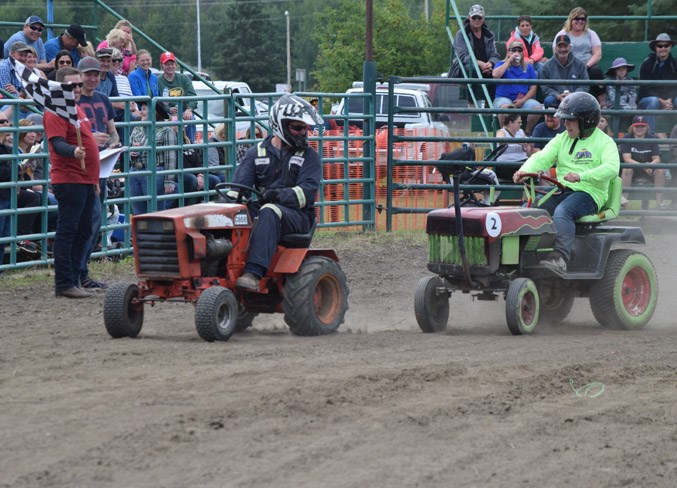 Craig Schulte (l) looks back to see where his opponent Dausen Kluin is in the second heat of the stock class.

It started with a bit of friendly bravado between three friends.

On a Friday night at the Fort Assiniboine Legion, three friends Zac Marcellus, Tyler Thompson and Dausen Kluin, went for a night of chicken wings and socializing.

It did not take long for the discussion to stray to the topic of lawnmowers.

“Tyler Thompson bought a suped-up lawn mower from Saskatchewan and he was bragging about how fast it was,” Kluin said.

Of course, Marcellus and Kluin couldn’t let that statement go unchallenged and decided they would put him to the test.

However, the trio decided the race shouldn’t just be amongst themselves, but the whole community.

“The Hoedown was getting a bit long in the tooth and attendance was starting to wain, it would be a good way to possibly boost the interest,” he said.

The group drafted a set of rules, basically setting up three classes, stock, stock-modified, and extremely modified, better known as the “outlaw” class, got permission from the hoedown committee and started looking for racers.

The first-year there were six racers.

“It wasn’t very well organized,” Kluin admitted, but noted despite that fact the event started to grow.

In 2018 there were 23 lawn mowers, and last weekend during Aug. 17 event there were 27, including a group from Jarvie.

And Kluin said they believe the sport will keep growing.

Last year the group decided to formalize and created the Fort Assiniboine Lawn Mower Association. The move means they will be able to fundraise, getting more resources to promote the sport.

“Next year we plan to be in Barrhead’s Blue Heron Fair Days, as part of its demolition derby,” he said, noting they were scheduled to be part of this year’s festivities, but unfortunately they didn’t have quite enough competitors.

As for how Kluin did at the Hoedown, unfortunately, it wasn’t his year. Competing in the stock event Kluin was eliminated from official competition after losing in his first heat.

Something he suspected might happen. The Barrhead Leader spoke to Kluin two-days before the race and he said he was experiencing mechanical difficulties something he hoped to resolve by race day.

None the less, Kluin did not let that stop him from competing, unofficially. After making some modifications he raced in another heat, losing once again. In his final heat of the day, Kluin, who suffers from cerebral palsy, decided to ditch his lawn mower and use his scooter.

Unfortunately, although he fared better using his scooter, he lost his third heat, this time by a smaller margin.