A piece of Alberta’s colonial settlement history remains preserved by one local group which looked back to a time in the distant past last weekend, but keeps its eyes on the future still. On Aug.
Aug 20, 2019 8:00 AM By: Andreea Resmerita 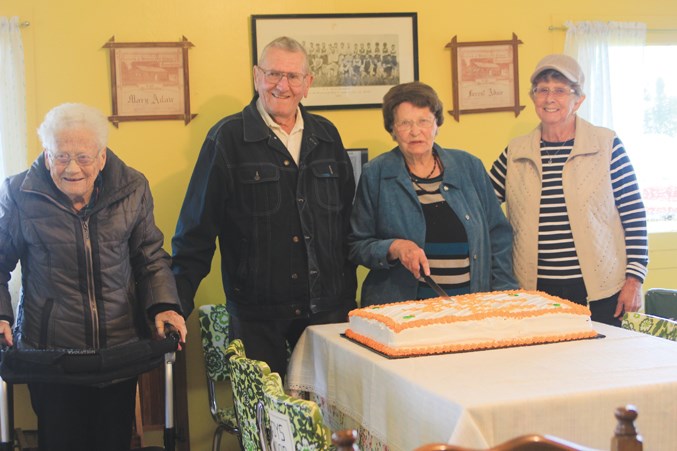 Edie and Bob Horricks, Shirley Cross, and Old Timers Association secretary Hariette Pollard-Wiedrick, along with other old timers, were gathered at the Old Timers cabin on the ag grounds Aug. 17 to celebrate the organization’s 100th anniversary with a cake cutting. Guests trickled in and out, throughout the day, just like the old timers intended.

A piece of Alberta’s colonial settlement history remains preserved by one local group which looked back to a time in the distant past last weekend, but keeps its eyes on the future still.

The story of the Old Timers goes back to 1919, when a collection of early pioneers to the area formed the Pioneer Association “to provide a meeting place to honour the settlers each year, visit and reminisce about good times,” said Harriett Pollard-Wiedrick, secretary of the organization.

The banquets continued over the years and at the cake -utting event Pollard-Wiedrick pointed to Shirley Cross, who has attended the fall supper every year.

It was in 1938 that the name was changed to its current iteration, the Westlock and District Old Timers Association. And still the banquets continued.

Back in the day, Fanny Sterling would make scrolls for the lifers who celebrated important events there: 80, 90, or 100-year birthdays; 50, 60 and even 70-year wedding anniversaries.

The Sterling family also had a band that provided entertainment for the banquets. They’re still playing too. Keith Sterling and Roy and Wendy Sterling are band members to this day.

“This is surely a record in volunteering,” said Pollard-Wiedrick.

Then there is the cabin itself.

The building everyone knows on the ag grounds has only been there since 2011. But the cabin itself dates back to 1951, in fact even further. It was an old food booth on the fairgrounds over the years before some volunteers decided to renovate it and put it to a different use.

Cross, who is now over 90 years old, reminisced about the importance of that meeting place for so many people, as far back as the years in which the railroad was being built in Westlock.

There was also a time when the closest place to go to for materials when you tried to build, say, a church, was Morinville. And that was a long trek, but doable if you returned to a warm meal and a hot drink.

Traditions continue for the Old Timers. At the 105th annual fair last weekend, their cabin was open, there was hot tea and coffee inside. The break from the wind and the rain was surely welcomed by those who stepped through the cabin door.

And there were jokes too: “Did you hear about the fella who walked into the bank with some marijuana? He wanted to open a joint account.”

Who says Old Timers can’t get with the times?