Remembering the liberation of Holland

Second World War veteran Tom McConaghy plants a tulip bulb in the specially-made planter made by R.F. Staples School students. It was part of Remembrance Day commemorations at the school Nov. 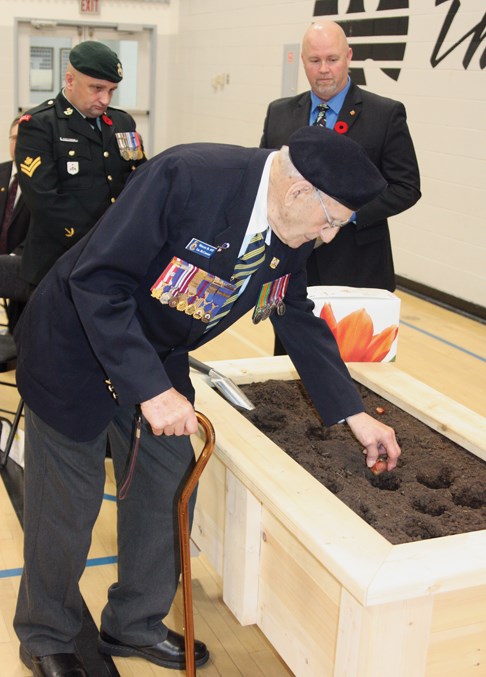 Second World War veteran Tom McConaghy plants a tulip bulb in the specially-made planter made by R.F. Staples School students. It was part of Remembrance Day commemorations at the school Nov. 7, during which the veterans and Legion members on hand took the opportunity to plant tulip bulbs to mark the 75th anniversary of the liberation of Holland during the Second World War.

While the poppy has always been the dominant symbol of Remembrance Day in Canada, but in the Netherlands, the tulip is the flower the Dutch look to when remembering the Canadian soldiers who liberated their country from the Nazis at the end of the Second World War.

The people of the Netherlands have been celebrating their Canadian liberators for 75 years now, holding events of remembrance to celebrate Canada’s contribution to the war, exchanging gifts throughout the years and building on a beautiful friendship that was born out of brutal war.

To commemorate the 75 years since the end of the nine-month long battle to free Holland from Nazi occupation, the Dutch royal family sent tulip bulbs, to be planted by students around the country. More than 7,600 Canadian soldiers died while in the country.

R.F. Staples School was one of the 1,100 Canadian schools to receive the tulip bulbs and the planting ceremony took place during the school’s Remembrance Day commemorations Nov. 7.

Two Second World War veterans along with other members of the Westlock Legion and one serving member of the Canadian Forces planted the bulbs in an indoor planter, in the hopes the flowers will grow tall and strong, just like the Canadian soldiers.

Taking part was a no-brainer for teacher Mike Edwards who jumped at the opportunity and took the concept to his leadership class. Edwards, coincidentally enough, also has some Dutch in his family tree. His grandfather was in the Dutch Marines.

“The Netherlands wanted to show their appreciation for, and in remembrance of 75 years of liberation for Holland, by sending 1.1 million tulip bulbs to Canada, one for each Canadian who took part in the war,” said Edwards.

“In the leadership group the idea was to have a ceremony to plant these bulbs that involved the Legion members and students to try to pass the torch.”

Tulip bulbs need to be chilled for 10-16 weeks before sprouting, so hopefully by spring, the colourful flowers will germinate, grow and bloom and provide a little reminder of where they came from and why they are now in Westlock.

Sage Sekulich takes Edwards leadership option and took part in the planning, she pointed out there are still more bulbs to plant than the ones from the ceremony, though she’s not exactly sure where all of them will go.

“It’s important, not only because we’re being acknowledged, but because we’re also reminded to acknowledge those who did fight and did die in war, along with all the peacekeeping missions, and everyone who has participated in the military,” she said.

Projects like this one help students develop leadership qualities and skills they can build on outside of school, said Sekulich, and partnering with members of the Legion for the tulip ceremony was part of their responsibility to the community as the next generation.

“I think the program aspires to make people into leaders in their lives and in their communities and help shape them into successful people,” she said.