Parker Evans from Pembina North Community School places a flag on a veteran’s grave Oct. 24 at the Jarvie Community Cemetery as part of No Stone Left Alone ceremonies.
Andreea Resmerita Nov 5, 2019 12:06 AM 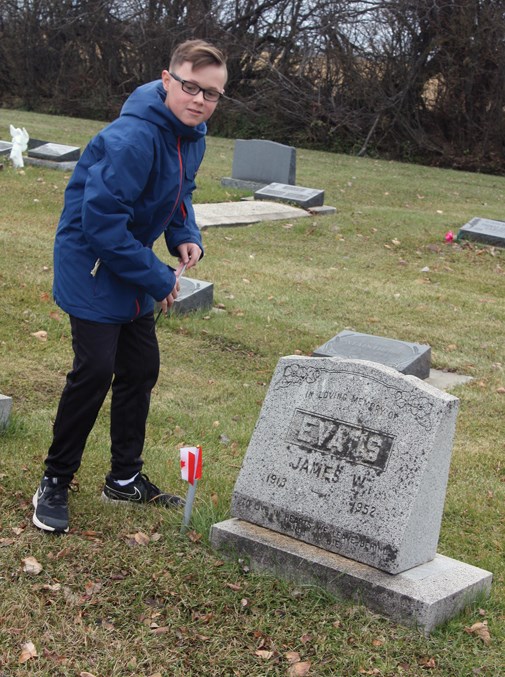 Parker Evans from Pembina North Community School places a flag on a veteran’s grave Oct. 24 at the Jarvie Community Cemetery as part of No Stone Left Alone ceremonies. Similar events will take place throughout the region and across Canada this week as Remembrance Day draws closer.

Ahead of Remembrance Day, local students, along with students around the country, are honouring long-gone veterans, placing poppies on over 550 graves in the region’s cemeteries.

On Oct. 24, students from Pembina North Community School were joined by members of the Flatbush Legion #137 for several short remembrance ceremonies at cemeteries throughout northern Westlock County, starting at the Jarvie Community Cemetery, where they placed flags on the graves of 50 veterans, some of whom were active during the wars and some who put themselves forward just in case.

It was the first of several more No Stone Left Alone events to take place in the coming weeks ahead of Remembrance Day on Nov. 11.

On Nov. 4 students from St. Mary School joined Westlock #97 Legion chaplain Marjorie Steele, who directs No Stone Left Alone for the Westlock area, in a ceremony at the Saint Mary Catholic Cemetery. They will head to the Westlock Municipal Cemetery with their R.F. Staples counterparts on Nov. 5.

The Town of Westlock fire department has already placed 100 flags on the graves of veterans ahead of the ceremonies.

For the Tuesday event, bugler Alex Shabert will play Last Post and Reveille, followed by a ceremony conducted by Steele. After laying the poppies, the group will head to the Legion for a warm lunch.

“It’s been a labour of love for me,” said Steele, herself a veteran.

She served from 1958 to 1962 in the Reserves in Saskatchewan in the service corps — her twin brother was in the armoured corps.

Eight years ago, she read about Maureen G. Bianchini-Purvis, the Edmonton woman who started No Stone Left Alone in 2011. Purvis visited her veteran parents’ graves at Beechmount Cemetery with her family each year to lay poppies, and her daughters were surprised to see few other graves had them, which prompted Bianchini-Purvis to slowly build on that idea and deliver poppies to each veteran grave.

In Westlock, Steele took the lead, traveling around the district with a friend looking for veterans’ graves.

“The first couple of years it was really hard because we didn’t have anything to go by but we continued on. We put flags on the ones that we found and then we got the children involved,” said Steele.

Most graves are marked in some way, some have headstones with their regimental numbers inscribed, but her friend, born and raised in the area, was a main source of help in identifying the rest. She also checked the names with the Legion’s records.

“In Pickardville, there is a fellow’s grave. He was in the Boer War and in the First World War. That’s the only one I’ve ever found that served in both wars. So it’s mostly by asking people, checking the headstones and a lot of footwork.”

Bianchini-Purvis also contacted Steele when she learned of the Westlock veteran’s efforts to uncover the graves and they’ve become very good friends since.

Since its non-profit inception in 2011, No Stone Left Alone has become a national event, having grown from 100 students in that first year to a little over 9,000 in 2018.