Town says goodbye to the Kellers

“Every community, large or small, needs volunteers. They are the people that make the difference,” wrote long-time Westlock resident Donna Keller in a letter to the editor published by the News June 6, 2011.
Aug 20, 2019 10:00 AM By: Andreea Resmerita 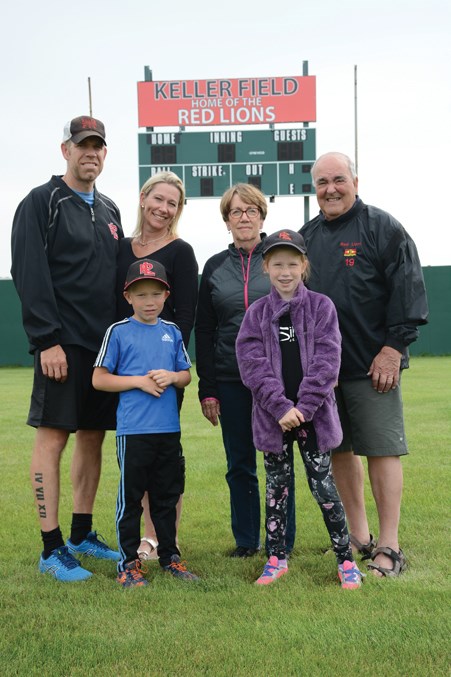 The Keller family met up at their namesake Keller Field Aug. 15, the day after the town said goodbye to Chuck and Donna at a recognition ceremony at the Westlock Inn. Pictured (L-R) is Trent and Kim Keller with Donna and Chuck Keller and grandkids Hoxley and Dylan.

“Every community, large or small, needs volunteers. They are the people that make the difference,” wrote long-time Westlock resident Donna Keller in a letter to the editor published by the News June 6, 2011.

The volunteer spirit of the Keller family, who is now setting off for Ontario, was celebrated by the Town of Westlock, along with friends and family Aug. 14 at the Westlock Inn, during a citizen recognition ceremony.

Chuck and Donna Keller, who were both born in Fawcett, left for  university — Chuck for the University of Alberta and Donna for NAIT — and returned once completed. They have stayed here ever since, with Chuck as a teacher and Donna taking a job at the old Immaculata Hospital.

But what distinguishes the pair is a long list of outside-of-work achievements. The celebration last Wednesday marked not their careers and their jobs, but also the extraneous labours of love — the work that comes with no remuneration.

“Any occasion that comes along, she just has a knack for bringing that occasion to life,” said Karen Bauman, with whom Donna worked to put together the Rotary dinner theatre.

Bauman recalled a time when one of Donna’s sets designed for the dinner theatre was so complicated that one of the stagehands got locked inside, and had to stay there until the next set change.

And then there was Bruiser the bull — the details of which should perhaps be left to those who know, or those who know who to ask.

Costume parties, set design for the Rotary dinner theatre, practical jokes, other ventures like walking around the town in penguin costumes — this is a short list of Donna’s (mis)adventures, but needless to say some will remain as Donna’s domain for the community.

“You may have traveled with them. You may have been taken a zipline across a gorge in New Zealand when you don’t like heights. You may have dealt with them with a wheelchair with no rubber on the tires in Mexico on cobblestones and on beaches,” said Linda Williams, longtime friend of the Kellers.

The sense that she brought up was that of a family deeply entrenched and devoted to a small town, but with the clarity of mind to seek out other places in the world — adventurous and fun.

Then there is the baseball.

Chuck was a player and Donna a super-fan with an eye to spot when a pitcher should be pulled.

The pair has been around since 1968, which was the beginning of the North Central Alberta Baseball League. Westlock brought home the championship trophy in the early years, wining in 1975, 1976 and 1978.

In 1994 and 1995, Chuck was manager of the year for the Red Lions. Scorekeeper, governor, statistics, groundskeeper, biggest fan — that’s what followed. The field has worn the Keller name since 2005.

“I have never met a man who loved (the game of baseball) more than he,” said Paul Riopel, commissioner of the NCABL.

Also at the recognition ceremony on Wednesday was the Kellers’ son, Trenton, along with his family, who came from Ontario for the occasion.

Although this was intended as a surprise for both, Williams clarified that not much can be kept from Donna. Still, Chuck was stunned when he pulled into his driveway that morning.

The Town of Westlock has set up an area in the Rotary Spirit Centre as a community champion recognition spot. A plaque will be set up for their lifetime service on the grandstands at Keller Field, and another was given by the town to the couple as a token of recognition, to take with them to their new home.

“I can’t think of two more deserving people than Chuck and Donna to be the first members of this illustrious group,” said Westlock’s  deputy mayor Randy Wold.

The Kellers will be leaving for Brooklin, Ontario in two weeks’ time, to join their son and grandchildren.

There were some gift bags from their friends, mainly things to enjoy on the drive, but like Bruiser the bull, that’s for the knowledgeable.

“We’re moving to get out of working at the dinner theatre,” joked Donna at the end of the ceremony. But there were tears — not so much from her but most definitely from Chuck.

“I worked at the mound on the baseball diamond for the last time this morning,” said Chuck.