Dave Pape brought with him a home-built miniature jet engine, which he fired up for the crowd of 20 people on the tractor museum Aug. 31.
Sep 3, 2019 12:08 AM By: Andreea Resmerita 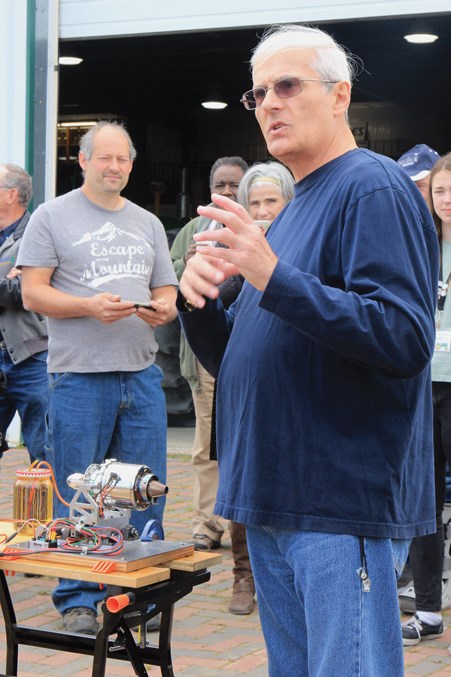 Dave Pape brought with him a home-built miniature jet engine, which he fired up for the crowd of 20 people on the tractor museum Aug. 31.

Dave Pape brought with him a home-built miniature jet engine, which he fired up for the crowd of 20 people on the tractor museum Aug. 31.

A miniature home-built jet engine demonstration, a 3D printer and some very special decorative metal windmills were only a few of the eye-catching things happening at the Canadian Tractor Museum last weekend.

To say farewell to summer, the museum organized its first-ever Farewell to Summer event Aug. 31 and invited the Alberta Metal Enthusiasts Network, an Edmonton-based group whose work correlates with the mandate of the museum.

Museum president Art Purdy also introduced three new pieces to the museum: lawn tractors which he modified, taking out the engine and the transmission and replacing them with foot pedals.

“So now when we have our little children driving the little toy pedals, now we have the even bigger kids and even adults having these other pedal tractors to drive around in,” said museum administrator Annette Schwab.

Schwab also wanted to remind folks that the museum won’t really be closed for the cold season.

“We’re open for tractor track time, birthday parties, we’ve got rental facilities coming up and we have regular groups that meet in there.”

And there were donuts too, good ones, Schwab assured everybody.

Ron Cairns, who is a speaker at the museum frequently, came with the idea to feature the metal enthusiasts –- he’s a member and makes detailed decorative metal windmills, which he displayed at the event on Saturday.

Steven Ashton, a colleague of Cairns’ in the network, commented on the level of metal and assembly knowledge anyone would need to build those mills.

Ashton himself came with a few of his own devices from Edmonton, where he lives. He explained that his passion for metalwork started in high school, in an industrial art class.

On his table was a little device that worked with compressed air. To understand how the enthusiast’s mind works, you have to investigate further, and ask about the machine next to that device.

“I didn’t want to bring my big, heavy, noisy compressor because everybody would chase me out of here. So I built this compressor out of an old water cooler that I found in the back alley, discarded because it was broken. I took the motor out of it and an old empty propane bottle from a stove and cobbled together a compressor,” explained Ashton.

The point isn’t buying what you need. You have to make it yourself, and with recycled materials.

In the afternoon, about 20 people were treated to a demonstration of another member, Dave Pape, and his category of homemade metal work, a miniature jet engine.

Although it took a few tries – air kept getting stuck somewhere in the engine fuel valves, forcing Pape to syphon some of the jet fuel the old-school way — the engine worked like a real one and burnt out a couple of times.

You could tell it was real by the fumes it emitted into the watchful crowd.