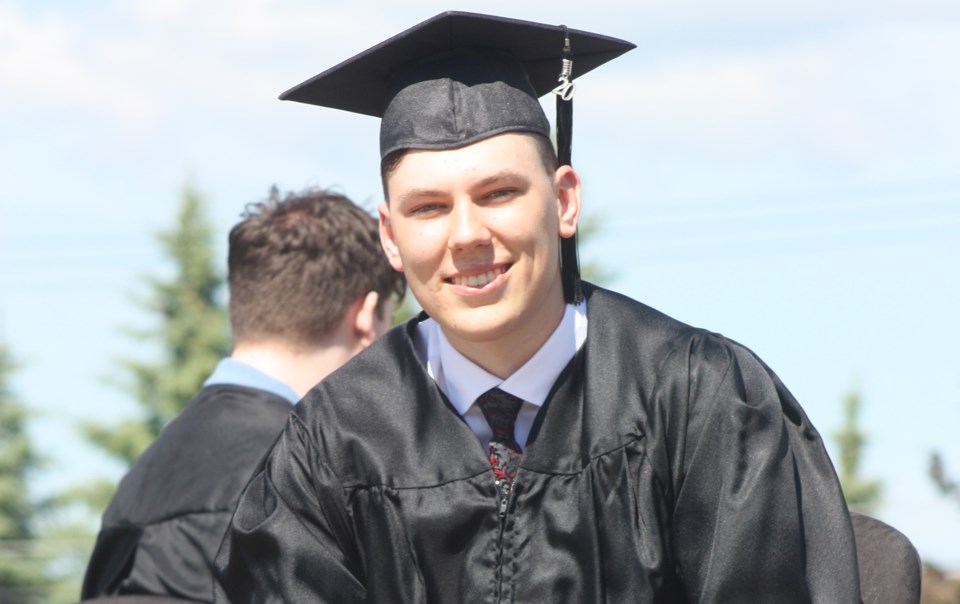 Boyle School’s 2020 valedictorian Colby Bechthold, pictured during the June grad parade, thanks the community and teachers for their support during an unprecedented grad year. File

Boyle – It has been a year of surprises for students everywhere due to the COVID-19 pandemic, but besides not being able to have a graduation ceremony like previous years’ grad classes, Boyle School’s 2020 valedictorian says it was a pretty good year.

Colby Bechthold attended Boyle School for almost the entirety of his educational career, save for one semester at Vimy Ridge Academy in Edmonton when he played hockey in Fort Saskatchewan in Grade 11.

“I’ve been in Boyle practically the whole time,” he said.

That goes for the rest of his graduating class as well.

“We’ve had the same core group of people from playschool on, it’s been fun seeing everyone grow up and how everyone has changed over the years,” Bechthold said, adding that many of them played school sports together, so the bond between classmates was strong long before they got to their senior year.

“We have a lot of good memories from that.”

Of course, the class of 2020 will go down in history as the class that wasn't able to finish their year because of the pandemic, but Bechthold says besides missing out on track and badminton season in the spring, it wasn’t that much of a setback. Students were able to complete their studies with the help of attentive teachers who wanted them to succeed. For that, he’s grateful.

“It was kind of heartbreaking because you work so hard and you want your senior year to be one of your best years, but with everything going on I think it’s not that big of a deal,” said Bechthold. “You miss out on some stuff, but it’s small compared to what’s going on.”

Not being able to have a proper graduation celebration was also a sacrifice the class had to make, but an impromptu outdoor event and a parade that saw residents come out to wave and cheer the graduates on as they were towed through town, helped make up for it, he said.

“It was surreal. We had our doubts about how it would go and who would be there, but it was a lot of fun seeing everyone come out and cheer us on for something we worked so hard for … It was really cool,” he said.

Bechthold will be pursuing his hockey dreams next year and plans to do so in Saskatchewan, but he has also been accepted into MacEwan University’s Bachelor of Science program, as a back-up plan.

Mayor to take questions on Facebook Live
Sep 25, 2020 6:30 AM
Comments
We welcome your feedback and encourage you to share your thoughts. We ask that you be respectful of others and their points of view, refrain from personal attacks and stay on topic. To learn about our commenting policies and how we moderate, please read our Community Guidelines.