CN strike comes to an end 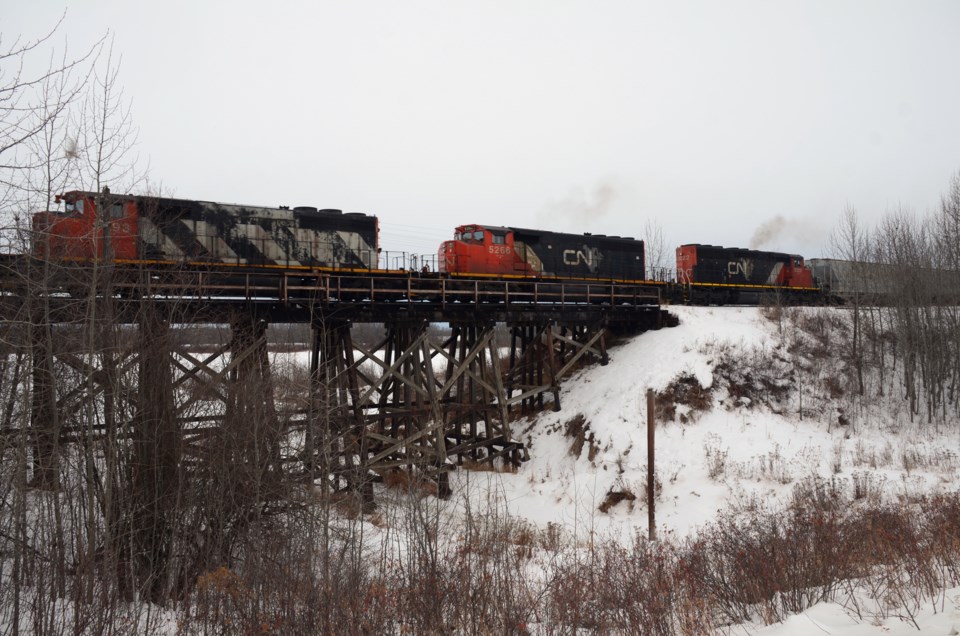 CN trains began rolling again through Westlock Nov. 27 following a week-long strike. Details of the agreement will not be revealed until members vote on the deal by secret ballot, but the union previously said the dispute was over long hours and fatigue that led to what it characterized as dangerous working conditions. WN File

WESTLOCK - After a week-long strike, the first southbound CN rail train on the mainline south from Peace River rolled through Westlock at 9:45 a.m., Nov. 27.

CN Rail and Teamsters Canada reached a tentative agreement Nov. 26, one week after failed negotiations sent more than 3,000 employees to picket lines across the country.

Details of the agreement will not be revealed until members vote on the deal by secret ballot, but the union previously said the dispute was over long hours and fatigue that led to what it characterized as dangerous working conditions.

Westlock Terminals CEO Clifford Bell said they were hopeful to get cars already ordered before the strike in as soon as possible so that staff could get them loaded.

Terminals  logistics co-ordinator Brittany Ketsa confirmed they have asked and ordered up to 100 cars. She said if the cars do arrive, staff will work quickly to get them loaded, staggering work hours so that they can have more hours per day loading time.

She noted Nov. 27 the Terminals were “pretty well filled up at the moment” but during the strike, Terminals trucks, and trucks ordered by customers further away, have helped with space for some grain to continue to be delivered.

Ketsa also added the 25 rail cars owned by Westlock Terminals are currently in the Abbottsford area of B.C., or somewhere between. She is hopeful those cars will be returned quickly, as there is a demand for more feed grains for that market and orders waiting to be filled.

Meanwhile, she noted there were 15 rail car loads of wheat and barley and one of canola that had been released to CN Rail for pickup before the strike began.

“Hopefully, those will be picked up soon,” she said.

Reports indicate it could take weeks for CN to clear the backlog of commodities built up over the strike period, and even months before the true costs are known to industries that rely on rail.

The strike halted 90 per cent of CN’s traffic, affecting industries from mining, petroleum, farming and forestry. It is estimated the strike will likely cost the Canadian economy about $1 billion. Those reliant on rail say the government needs to take more steps to prevent another labour disruption like this one in the future. There is a feeling freight rail commodity shipping needs to be deemed an essential service.

A short CN Rail video says about 24,000 people are employed by the company in Canada and the U.S. , and carries over 300 million tons of cargo annually. The company moves more than $250 billion worth of goods every year, including 1.5 million shipping containers handled annually, and is the largest rail carrier of forest products in North America. CN Rail has approximately 32,000 kilometres of interconnected rail that meets ports on Canada’s east and west coasts, as well as the Gulf of Mexico.

Although figures for grain handled by CN Rail were unavailable one report noted CN and CP moved 40,618,285 tonnes in the 2017-18 crop year — CN is reported to be the largest carrier.